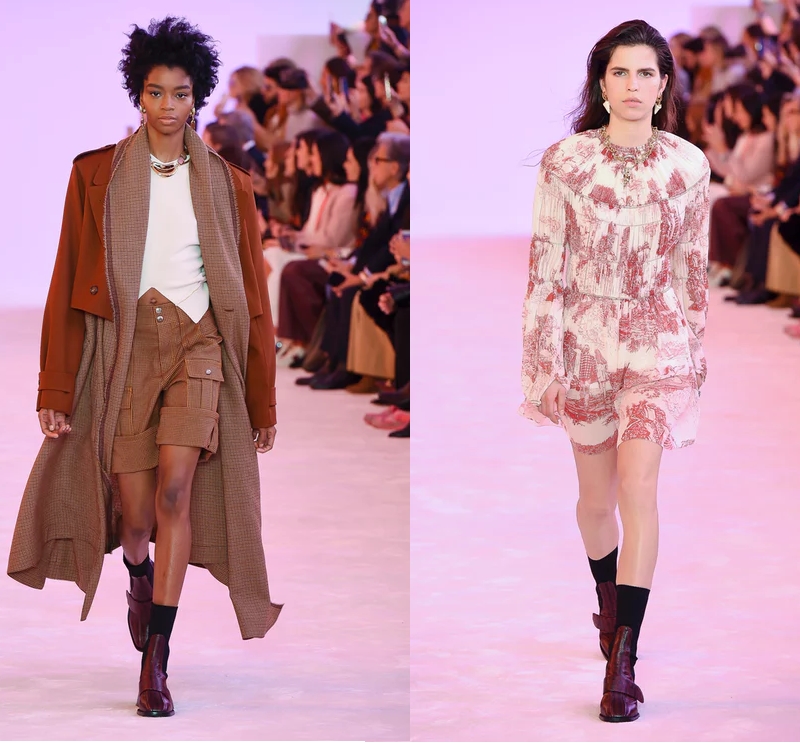 This article titled “Chloé gives Highlands twist to its traditional Parisian chic” was written by Scarlett Conlon in Paris, for theguardian.com on Thursday 28th February 2019 15.12 UTC

Where do French girls go on holiday? Hiking in the Scottish Highlands, according to the Chloé’s creative director, Natacha Ramsay-Levi. The designer, whose adopted brand has been the ultimate purveyor of ultra feminine and Parisian chic since its inception in 1952, may have had a Mediterranean-beach-hopping and souvenir-shopping woman on her moodboard last season, but now she is kitting out her customer for a winter expedition.

She joins many other European designers this season, including Riccardo Tisci at Burberry and Maria Grazia Chiuri at Dior, in looking to icons of British culture for inspiration for her autumn/winter 2019 outing. “I started this collection by putting her on a landscape, grounded in the Highlands with kilts, Prince of Wales checks and outdoor clothes to protect [her] from the storm,” Ramsay-Levi said of the woman she had in mind for this collection. It accounted for the enveloping ribbed knits, capes and drawstring anoraks for outerwear, and all manner of prints, which included a “Highlands Toile de Jouy”. Her square-toe leather boots, meanwhile – complete with a practical chunky heel – incorporated a stretchy sock.

As well as the familiar motifs synonymous with rugged British terrain, the heroine of her tale took her lead from Emily Brontë. “For me, [my woman this season] was a pioneer of something, she was into this tumultuous landscape.” Ramsay-Levi evoked the gothic romance of Brontë’s epoch through a series of velvet-devoré and silk-jacquard handkerchief-hem dresses with lace inserts and ruffled collars in amethyst, scarlet and deepest indigo blue. A more contemporary portrait of love came via a photograph of a couple holding hands looking out onto a mountain silk-screen printed onto tops and bomber jackets. The motif will match the popularity of last season’s screen-print of two hands cupping the sun into a heart shape.

Chloé being the luxury house that it is, however, meant Ramsay-Levi didn’t let the ruggedness run away with her. This was about as polished as explorer-chic gets, with smooth leather handbags and hardware adding shine. A continuation from last season’s souvenir chic, necklaces took on a talismanic theme, she said, featuring horn and shark-tooth shaped charms and resin amulets. Tufts of horse hair were also prominent on the accessories, making a nod – along with the galloping horse soundtrack – to the house’s equestrian roots.

Its heritage was a focus of today’s show with the company paying tribute to Karl Lagerfeld, who was the house’s creative director for a total of 25 years, spread over two stints. “His joyous capturing of the spirit of the Chloé woman is eternally treasured by us and by everyone who felt the freedom and beauty of wearing his clothes,” said the show notes. 39-year-old Ramsay-Levi – who arrived at the house in 2017 – paid her own tribute backstage after the show, revealing that his designs at the house regularly inform her own.