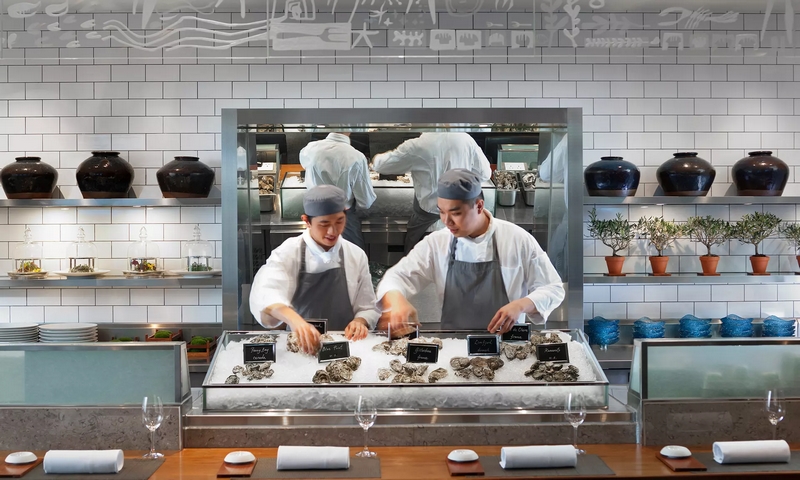 For decades, there were only two options for dinner in Hong Kong: sticky, late-night dim sum bars and white-tableclothed European restaurants. But the middle ground has recently been flooded by hundreds of imaginative chefs who are clearly having fun with their food – think continent-fusing pairings and recipes from centuries past – and these six are leading the way.

Nicolas Elalouf of Man Mo Dim Sum
This groundbreaking restaurant has taken the bold, and oddly delicious, step of fusing Chinese cuisine with western ingredients – such bravery as mozzarella dumplings and bolognese buns. Nicolas Elalouf came up with the ultimate fusion-food concept when he moved to Hong Kong from Switzerland, and fell in love with the oily, spicy dumplings the city is famous for. “I was addicted to them, but I also realised that every restaurant was using the same ingredients, so I decided to shake it up a bit,” he says.

His signature dish is the truffle brie dumpling, dedicated to his favourite cheese. “The taste is really so good,” he says, “and everyone loves the sensation of biting into a dumpling and feeling the cheese melt in your mouth. I also think people aren’t used to associating Chinese food with cheese, so it’s a real surprise. We pan-fry it once it’s been steamed, so the crust tastes a bit like the bread you eat with cheese in Europe.”

Wong Wing Keung of Yee Tung Heen
One of the first Cantonese restaurants to get a Michelin star, Yee Tung Heen at the Excelsior is Hong Kong to the core, with dishes that date back a couple of centuries. This obsessive focus on the past is thanks to chef Wong Wing Keung, who has scoured history books and looked through his father and grandfather’s recipe books to bring unusual dishes back to life.

“I try to make the menu as traditional as possible, although some ingredients are hard to find nowadays,” he says. “One of my favourites is chicken testicles, which are used to make a dish that’s been passed down my family for hundreds of years, but which can be very difficult to buy.”

Equally traditional and arguably more tempting is his baked salted chicken. “That’s my personal favourite,” he says. “I’m keen on bringing those dishes that have been thought lost back on to people’s plates.” And his signature recipe? “Pan-fried egg with shrimps. It looks simple, and yet it takes years of experience to control the timing.”

Russell Doctrove of Limewood
Filled with bikini- and boardshort-clad locals throughout the city’s seemingly endless summer, Limewood in Repulse Bay has become the beachfront restaurant to beat on Hong Kong Island. Sure, it has potent cocktails and live music on weekends, but it is British chef Russell Doctrove who tempts the city’s most ardent sun worshippers off their beach towels and into his restaurant. “We wanted to create a menu that combined Caribbean, South American and south-east Asian cuisines, which basically means using lots of chillies, limes, and exotic fruits,” he says.

His most popular dish is the 48-hour charred beef ribs. “When we were originally designing the menu, we wanted to choose a meat cut that people would still want to eat on a really hot day,” he says. “As soon as we tried the beef rib we knew it would be an instant hit, as it’s so tender. The mango-infused sauce really complements the dish and has enough sugar in it to help with the charring process.”

Lee Man Sing of Mott 32
Mott 32’s cavernous interior, in the basement of the Standard Chartered building, has attracted Hong Kong’s glossiest crowd since its doors were flung open in 2014. Named after Mott Street in New York’s Chinatown and designed by celebrity favourite Joyce Wang, it’s an Instagram favourite – think iron chain installations, a giant abacus hanging above the main tables and a wall of Chinese calligraphy pens.

None of this distracts from Lee Man Sing’s sweet and salty Chinese-fusion cooking, and, in particular, his famous applewood-roasted Peking duck. “I want to create the best roasted duck in the world,” he says, confidently. “We source our duck from a farm in Beijing and then air-dry it for 24 hours under controlled temperature. After that, we burn applewood flakes next to it in high heat, to infuse it with the smoky apple scent. Our guests always comment on the waffle-like crispy skin and the way the juicy meat melts in the mouth.” This is also a duck that needs to be wooed in advance – too popular for last-minute decisions, you’ll need to order it 48 hours before your dinner.

Wai Keung Kwong of T’Ang Court
Hong Kong is made up of a series of islands and peninsulas in the warm South China Sea, which is why seafood-focused Cantonese food has always boomed in its harbourfront restaurants. But few are as illustrious as the lavish three Michelin starred T’Ang Court in the Langham hotel, which is headed up by Wai Keung Kwong – a chef whose focus is firmly on all things fishy.

“I love seafood,” says Kwong. “It has great flavours and is a healthy option. Our award-winning stir-fried lobster with spring onions, red onions and shallots is incredible.” After decades of working in the Hong Kong restaurant scene, Kwong can see a profound shift in people’s appetites. “Back in the 1960s, diners wanted great feasts filled with meat. By the 80s, the economy was booming, so everyone wanted to explore foreign dining options – and now, it’s all about healthy ingredients and local traditions. So, we focus on luxurious Cantonese food but with less oil, sugar and salt and more vegetables and fish.”

For all his lobster and baked oysters, however, there is nothing Kwong relishes more than a traditional Hong Kong snack. “All visitors to Hong Kong should try sweet milky tea and a pineapple bun,” he says. “They get me through the afternoon.”

Robin Zavou of the Mandarin Oriental
The Mandarin Oriental has been at the centre of Hong Kong life since the 1960s — and to step into the cool colonial-era lobby is to be immersed in a world of low ceiling fans, gilt-edged staircases, doormen dressed in scarlet and heaving breakfast banquets.

Robin Zavou has the all-important job of running the Mandarin’s 10 restaurants, of which a whopping three have Michelin stars. “At the moment my favourite dish is the laksa on the Krug menu,” he says. “It’s our interpretation of the classic Singaporean dish, but modified with langoustines from the Faroe Islands, coconut and squid noodles. The most popular, though, has to be roast beef at the Mandarin Grill. It was off the menu for a while, but all our guests were ordering it anyway – so we quickly learned our lesson.”