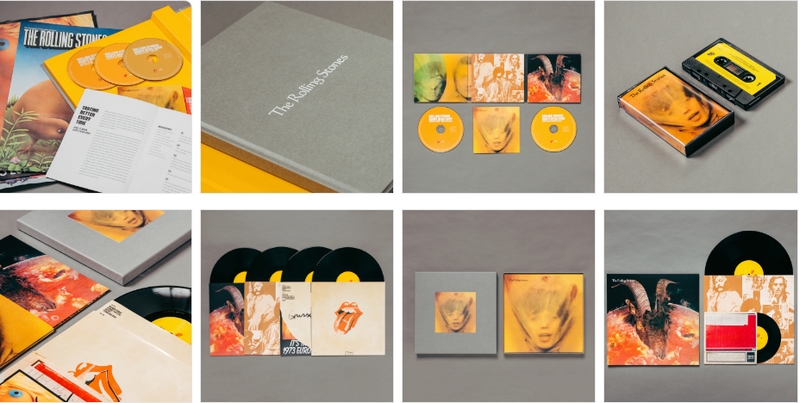 This article titled “You can always get what you want: Rolling Stones open London shop” was written by Mark Brown Arts correspondent, for The Guardian on Tuesday 8th September 2020 14.54 UTC

It will be a place where the committed fan can consider spending £535 on a Rolling Stones-themed crystal decanter, £110 on a “Stones red” bomber jacket or £15 on a face mask made from cotton or, for £10 more, silk. Big tongues are everywhere, mostly red, occasionally leopard print.

The venue is the world’s first permanent Rolling Stones shop, which will open in the spiritual home of all things cool, Carnaby Street in London’s West End, on Wednesday.

It will sell everything from T-shirts, hoodies and denim jackets to key rings, guitar plectrums and water bottles. All with a Rolling Stones brand.

The store is a collaboration between the band and the merchandising company Bravado, which has previously opened pop-up stores with merchandise for acts including Kanye West, Billie Eilish and Slipknot.

David Boyne, Bravado’s managing director, said the aim was to create something that was more than a shop.

“The number one objective was to make it experiential,” he said. “It is about giving the fan, the customer, a journey of discovery. This is our first permanent flagship store and we are very proud with what we have delivered.

The shop includes a glass floor featuring Stones song lyrics, screens showing footage of the band on tour and fitting rooms with album artwork from Exile on Main St and Some Girls. At the front of the shop is a red metal sculpture that true diehards may recognise as being based on the opening of the 1968 track Paint It Black.

The background music is, of course, by the Stones.

Some will say that opening a bricks-and-mortar retail operation now, as the pandemic continues, is very risky. “Time will tell,” said Boyne. “For us, it is about taking a really powerful, positive message to the marketplace.

“Some retailers are closing stores, we’re coming out with a very powerful, strong message that we are opening. It’s a cool store. Please come in and enjoy the experience.”

The store has teamed up with the French luxury brand Baccarat for a range of Rolling Stones glassware, which includes the decanter, tumblers and wine glasses.

There is also a black, rubberised Rolling Stones raincoat made by the Swedish brand Stutterheim, selling for £235.

John Pasche, who created the Rolling Stones’s now instantly recognisable lips and tongue logo – first used on the Sticky Fingers LP in 1971 – has created limited-edition artworks, on sale for £1,195.

The band may have a combined age of 305 but Boyne insisted they were as popular and relevant as ever. “They are definitely not has-beens. They are definitely still very relevant. Look at some of the stuff they’ve done this year – new record releases from Scarlet to the remastered Goats Head Soup, the Global Citizen video they did some months ago.

“They remain really relevant but I don’t think you can escape the rich history they have too. They have an amazing past but a really exciting present and future.”

If the London store takes off, others could follow in New York, Brazil and other European cities. “Watch this space,” Boyne said.