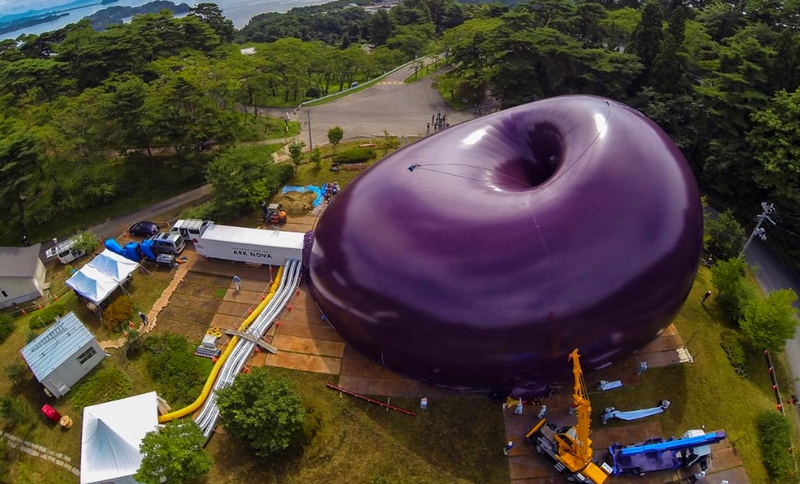 He’s designed an inflatable concert hall, an underground sports arena and envisaged entire cities floating above the earth’s surface. Now, at 87 years of age, Arata Isozaki has been crowned the winner of the 2019 Pritzker architecture prize, an honour regarded as the Nobel prize of architecture.

Regarded as a visionary who helped foster an architectural dialogue between the east and west, Isozaki’s style has remained fluid for more than half a century of work. He first made waves with his futuristic 1962 City in the Air project, in which Tokyo’s Shinjuku district was reimagined with a new city suspended over the old one on tree-like structures. Though unrealised, the project was a taste of what was to come: among Isozaki’s best-known works are the red sandstone Museum of Contemporary Art in Los Angeles, the twisting, metal Art Tower Mito in Ibaraki, Japan and the Palau Sant Jordi, a 17,000-person sports arena designed for the 1992 Summer Olympic Games in Barcelona, that sits partially below ground in order to draw focus to the surrounding hillside.

In their praise of Isozaki, the jury noted: “In his search for meaningful architecture, he created buildings of great quality that to this day defy categorisations.”

Isozaki was born in Ōita on the island of Kyushu, in 1931. The 1945 atomic bombing of nearby Hiroshima had a profound impact on him as a child. “I grew up on ground zero,” he recalled. “It was in complete ruins, and there was no architecture, no buildings and not even a city. Only barracks and shelters surrounded me. So, my first experience of architecture was the void of architecture, and I began to consider how people might rebuild their homes and cities.”

Isozaki had travelled the world several times by the time he was 30. “I experienced many places before I started designing buildings,” he said. “I wanted to feel the life of people in different places around the world. I travelled extensively inside Japan but also to the Islamic world, villages in the deep mountains of China, south-east Asia, and metropolitan cities in the US. Through this, I kept questioning: ‘What is architecture?’”

After graduating from the Department of Architecture at the University of Tokyo in 1954, Isozaki designed buildings in his hometown: Ōita Medical Hall and Ōita Prefectural Library were both heavily influenced by European brutalism. Isozaki went on to fuse these ideas with those from the Japanese postwar metabolist movement, in which designers took inspiration from plants, the oceans and organic biological growth.

Isozaki has not showed signs of slowing down. Following the 2011 tsunami that devastated parts of Japan, he created Ark Nova with Anish Kapoor, a travelling inflatable concert hall that could visit the affected areas. He recently designed the Shanghai Symphony Hall in China and the Allianz Tower in Milan, the latter in collaboration with Italian architect Andrea Maffei.

The Pritzker architecture prize was founded in 1979, and each year honours an outstanding living architect or architects who has produced consistent and significant contributions to humanity and the built environment through the art of architecture. This year’s jury, which included 2007 winner Richard Rogers and 2010 winner Sejima Kazuyo, summarised Isozaki’s lifetime achievements by noting: “[He] became the first Japanese architect to forge a deep and long-lasting relationship between east and west. Possessing a profound knowledge of architectural history and theory, and embracing the avant garde, he never merely replicated the status quo but challenged it.”

Isozaki is the 46th laureate of the Pritzker prize, and the ninth to hail from Japan. The 2019 Pritzker prize ceremony will take place in France this May, accompanied by a public lecture in Paris.