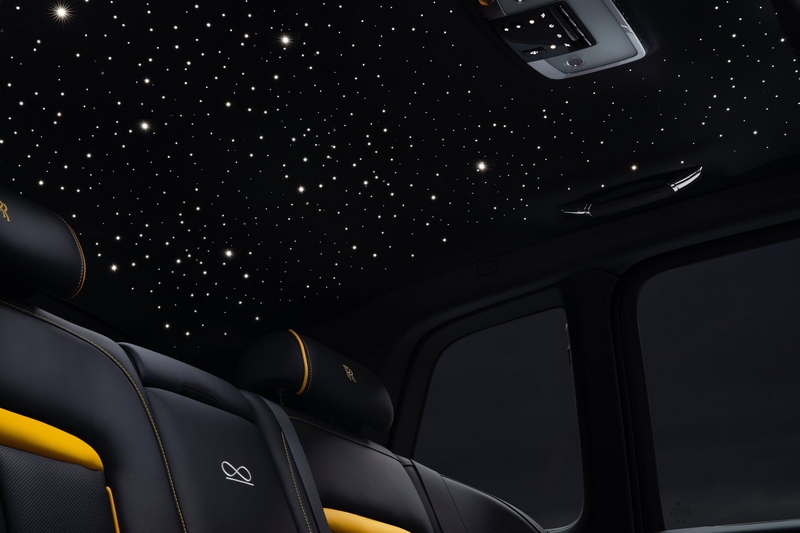 This article titled “Bling up my Roller! Inside the new breed of bespoke Rolls-Royce” was written by Rupert Neate Wealth correspondent, for The Guardian on Sunday 12th January 2020 16.30 UTC

Rolls-Royce is cashing in on the trend for extravagantly upholstered luxury cars by producing vehicles with a range of upgrades including televisions, champagne fridges and even paint mixed with crushed diamonds.

A common demand is for James Bond-style built-in champagne fridges, while other customers have had TVs and climate-controlled humidors [cigar containers] installed.

One Swedish billionaire paid for a one-million-satin stitch rose garden fabric interior. Others have the roof of the vehicle studded with more than a 1,000 LED lights recreating the sky at night – complete with shooting stars.

Another ultra-rich car fanatic paid an extra £250,000 for a Rolls-Royce Ghost to be sprayed in paint containing 1,000 crushed diamonds, quite an upgrade for a vehicle with a base price of £237,600 on the car company’s price list.

The paint has been named Diamond Stardust, and a spare tin of it is being kept in a safe at Rolls-Royce headquarters in Goodwood, Sussex, in case the owner suffers a ding.

The costs of bespoke cars, which can take a team of designers and engineers years to create, easily run into the millions and one two-seater Rolls-Royce coupe cost “double digit millions”. More than 100 craftspeople work on Roll-Royce’s bespoke vehicle service at its Goodwood plant.

“Everything that you can think about that’s not illegal, it is possible to do,” Torsten Müller-Ötvös, chief executive of Rolls-Royce Motor Cars, said. “People have worked hard to make their money, and this is about allowing them to create their personal dream.

“We are not in the car market,” he said as he showed the Guardian some of the company’s latest models in a yet-to-open showroom in Mayfair, London.

“This sounds funny what I’m saying but we are in the luxury goods market. And this market has very different customer patterns and behaviours.

“Nobody chooses us to get an object to go from A to B; it is very much about fulfilling a personal dream, commissioning a piece of art. Having something sitting in your garage waiting for you providing pleasure over the weekends or whenever you want to take it out for a drive.”

Müller-Ötvös said nearly all Rolls-Royces are now bespoke creations, and the pricey personalisations have driven the brand to record sales of 5,152 cars last year.

“Hardly any car leaves the company without being bespoke, I think over 95% are personalised and we have seen an increase every year,” he said. “Nobody who is shopping in high-end luxuries is interested in taking something from the shelf. They want to commission their own piece.”

Rolls-Royce, which is owned by German carmaker BMW, said 80% of its customers are businessmen and women, while the rest are famous names.

“You won’t hear names from me, but the other 20% are celebrities from all areas, music, film, fashion, sports, actors and royalty,” he said, before suggesting the Guardian watches a video of Ed Sheeran and Stormzy drifting in Rolls-Royce’s new Cullinan SUV.

Müller-Ötvös said Rolls-Royce is ditching its stuffy image and appealing to younger members of the wealthy elite with a range of “darker more menacing edgier black badge” models.

“The average age of our customers is 43, that means for every one 60-year-old buyer there is a buyer who is 20,” he said. “When I joined the brand 10 years ago, the average age was 56. The ultra-high net worth group is getting younger and younger because of [technology] making so many smart kids a fortune early in life.”

More than 1,000 members of the super-rich visited Rolls-Royce’s headquarter last year to talk to the bespoke service team.

“There are engineers, designers, craftspeople. Bespoke is an integral part of why Rolls-Royce exists,” Müller-Ötvös said.

“We are weaving nearly 1,400 fibre optics into the roof of the interior that resembles stars at night. We are doing that even with your private constellation and even shooting stars at the request of our clients. We also have humidors.”

A visit to Rolls-Royce’s rose garden inspired Swedish billionaire Ayad al-Saffar to ask the team to decorate the interior of his new car with flowers and butterflies. More than 1m embroidered satin stitches were needed to create the fantasy rose garden interior with an entanglement of greenery, flowers, and butterflies.

The Phantom Rose used in the design was created exclusively for Rolls-Royce by the British rose breeder Philip Harkness, and can only be found in the firm’s gardens.

One customer had the bespoke team stumped: he wanted his car to be more shiny than metal. Rolls-Royce technical laboratories came up with the idea of grinding down 1,000 “ethically sourced” diamonds into dust and mixing them into the paint.

“Customers will say ‘I bet you can’t achieve this’ and it sets the challenge for us,” one of the designers said. “Projects like this are an impetus to try new things.”

Müller-Ötvös also jets around the world to visit clients in their homes and garages to see their current car collections and work with them to create their next car.

“I have seen garages with over 100 cars” he said. “For many of our clients, they have garages for their cars like we have wardrobes for our clothes. For every occasion and for every purpose they have the right car.”