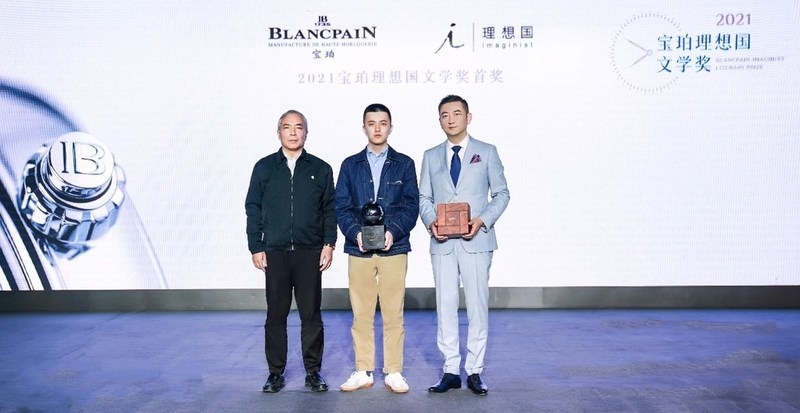 The award ceremony for the fourth Blancpain-Imaginist Literary Prize was held in Beijing on October 28, 2021. The author, Chen Chuncheng, won the grand prize for his work The Submarine at Night. The prize was jointly awarded by Blancpain, the fine Swiss watchmaker, and Imaginist, one of China’s the most influential publishers, with the goal of establishing an impartial , authoritative, professional, and influential literature award as well as to stimulate international dialogues in mainland China.

During the entries submission period which ran from April 10 to May 15, 2021, the Blancpain-Imaginist Literary Prize office received a record of nearly 100 works from authors and publishers. On August 23, the initial long list of 11 works was finalized and released by the Literary Prize Committee. The shortlist was announced on September 15. Jack Liao and Blancpain Cultural Ambassador Leung Man-tao presented the Blancpain Young Friend Award and the finalist certificates to the shortlisted five authors, Chen Chuncheng, Sun Pin, Zhang Ji, Zheng Zhi and Zhou Kai.

In addition to the award given to Chen Chuncheng, the other four shortlisted authors will each receive a bonus of CNY 20,000 from Blancpain in a move to encourage young writers to continue with their creative endeavors. The Blancpain Young Friend Award is both a medium for identifying literary talent as well as a form of mutual recognition. It not only represents Blancpain’s appreciation of the young, talented writers, but also stands for the identification and appreciation of similar characteristics in Blancpain’s brand values. The Blancpain Young Friend Award seeks to identify the best among the young, up and coming groups: entrepreneurs, Michelin chefs, and authors.

On behalf of the entire jury, Ge Fei presented the top award to Chen Chuncheng. Commenting on the winning title Submarine at Night, he said: “The author has found a unique way to combine knowledge with life, sensibility with rationality, imagination with precision, revealing a transparent and lingering temperament and a strong command of fantasy. The novel presents a new path for the contemporary novel by way of elegant and charming language.”

Chen Chuncheng said, “I thank the judges for their recognition. It is a great honor to win the award. Nevertheless, one needs to recognize that literature is not a competitive sport, but rather something that relies on many non-absolutes, including the consensus of several judges. Even the famous Ballon d’Or in the competitive sport of football is controversial every year, not to mention that literature is something that has no set standards or criteria of any kind.”

“After reading the books by the other four short-listed writers, I think they are all very good, each in their own way. Every writer should be true to himself, and remain true to his or her writing style and content. If someone later on were to say to me, you should write in such or such a way, or, you need to include a dose of reality, or if that someone were to teach me all kinds of theories, or even reveal to me the kind of writing that will assure my success, I will not heed his or her advice. I can only write in my own style. I cannot become Zhou Kai, nor can Zhou Kai become me. In a few words, live your own live, remain true to yourself and write in the way that you want to write. Thank you all!“

Jack Liao, member of Swatch Group China Management Committee and Vice President of Blancpain China, said in his speech that “in the past four years, we have been delivering a simple and profound message to the public by way of the Literary Prize: ‘Reading makes time more valuable ‘. We are thrilled to learn through comments we have read online that the books that have garnered the Blancpain-Imaginist Literary Prize have gradually become must-reads. We are also very pleased to observe the attention that more young authors are getting as a result of this prize. Once we announced the shortlist, the books of the authors on the list saw an increase in number of books that needed to be printed just to meet the increased demand. It is our goal to create an impartial , authoritative, professional literary award, and our mission to provide a stage and spotlight for young writers, empowering more people to know them, follow them, and like them.”

“Today’s award ceremony is just a ‘stop along the way’ for these young and aspiring writers. Today, Blancpain is taking stock of the times we are in, and then taking a close look at the information that has been collected, so that we can find a method, a way to light a fire under all those aspiring young and creative souls that are out there, so they can take a stand and eliminate any possibility of the impoverishment of the literary scene. As a brand with a long history going back 286 years, we believe in the success of every brand, author, or anyone, for that matter, as they face the inevitable hardships, difficulties and challenges. Every year should be regarded as new starting point on the long road. These are a few words I’d like to share with all of you as an encouragement: ‘May your journey be long, full of miracles and discoveries’.” 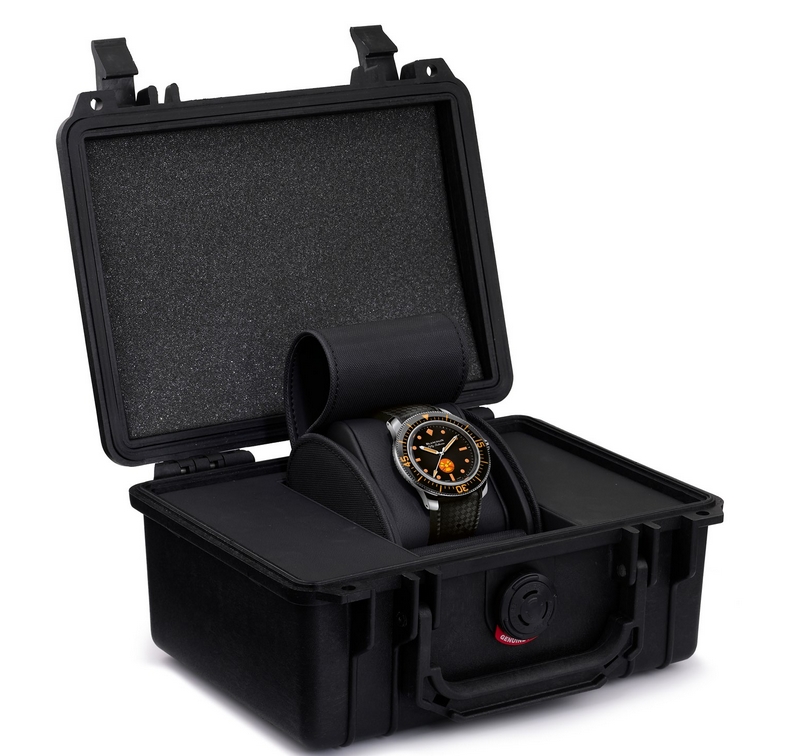 Blancpain, who has been supporting the Monaco Association against Muscular Dystrophy since its creation in 2001, renews its participation to the charity auction Only Watch. The luxury watchmaking Maison has chosen to dedicate a one-of-a-kind, Tribute to Fifty Fathoms No Rad model, to this noble cause. This exclusive timepiece inspired by an iconic Blancpain historical timing instrument joins the ranks of the rare and highly prized “No Rad” collector’s items, coveted by watch enthusiasts. This unique iteration were awarded to the highest bidder, in Geneva, on November 6th 2021. 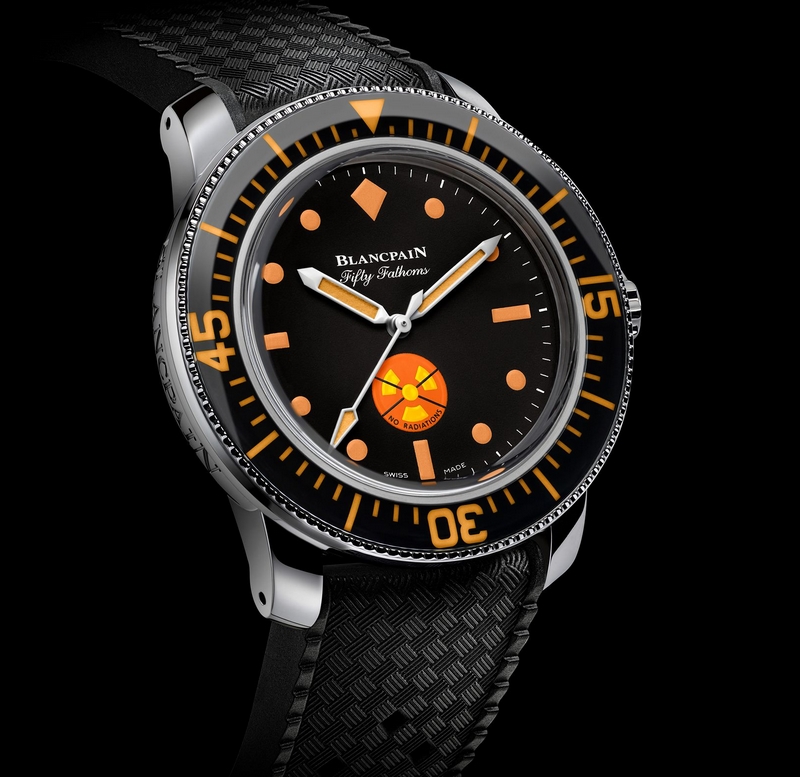 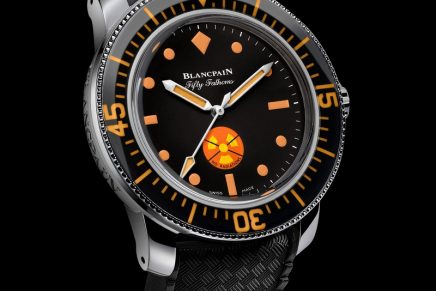 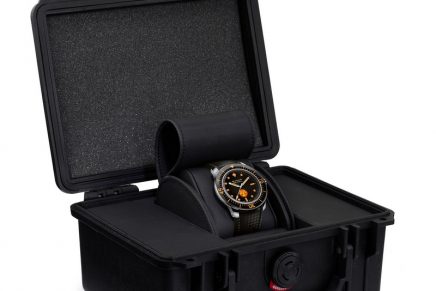 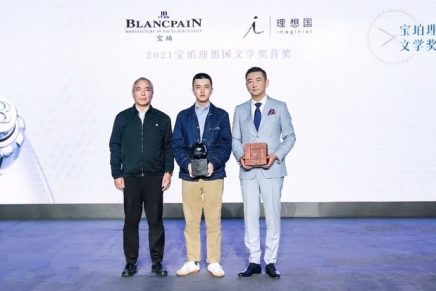