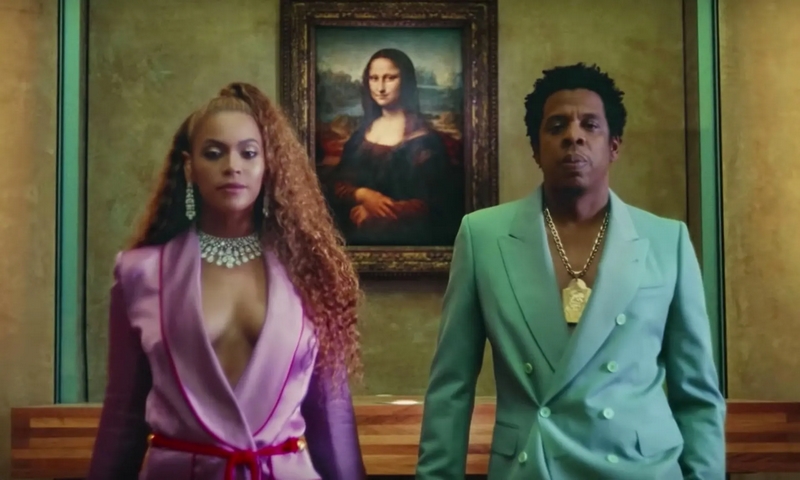 Fame sells: that’s the lesson in a survey revealing the world’s most popular exhibitions during a bumper year; Beyoncé and Jay-Z in the video for Apeshit, showing at the Louvre. Photograph: YouTube

This article titled “Beyoncé effect fills galleries with a new generation of art devotees” was written by Vanessa Thorpe, for The Observer on Sunday 24th March 2019 09.59 UTC

Last year the lustre of celebrity, whether garnered from fashion and entertainment or history, seemed to be the best way to attract visitors to museums and galleries.

The Art Newspaper’s annual international survey Art’s Most Popular, to be published later this week, confirms that the public are most curious about names they already recognise. It also reveals that Tate Modern has knocked the British Museum off the top UK spot for the first time in nine years. This success is chiefly down to the appeal of its critically acclaimed exhibition, Picasso 1932: Love, Fame, Tragedy.

The same effect was evident at the Louvre, where a decision to display Apeshit, Beyoncé and Jay-Z’s music video, boosted annual visitor numbers by a quarter. At the Smithsonian’s National Portrait Gallery in Washington a striking pair of portraits of the Obamas brought in a million more visitors.

As well as anointing Tate Modern as Britain’s top arts attraction, the survey, which draws on 22 years of data, will reveal that the gallery in Bankside has leaped to fifth position in the world, luring 4.9 million visitors in 2018. The V&A also drew in a record crowd, 178,000 more than the previous year, by focusing on familiar faces and names. Visitors headed to Frida Kahlo: Making Her Self Up, a sold-out show about the Mexican artist, and to its show about Winnie the Pooh, as well as a stylish celebration of the work of the Spanish fashion designer Balenciaga.

Similarly, that the star potter Perry guest-curated the Summer Exhibition at the Royal Academy of Arts helped give it its most successful year on record. It also won the title of top ticketed exhibition staged in London last year. The Piccadilly gallery clocked up a good year, with a record 1.6 million visitors, helped by also being the venue for the city’s second most popular ticketed show – a revealing display of Charles I’s collection of Old Masters.

The reported decline in interest in Britain’s main national museums in 2017 appears to have been arrested, although even with a heavy emphasis on starry themes general visitor figures were still down from a high-water mark in 2014.

Across the world it was the Metropolitan Museum of Art in New York that staged the two most popular exhibitions in 2018. These were Heavenly Bodies: Fashion and the Catholic Imaginations, a daring show that mixed religious art with haute couture and set a new record by attracting almost 1.7 million people, and Michelangelo: Divine Draftsman and Designer.

The popularity of fashion continues to grow – the V&A’s show about Mary Quant follows its highly successful Dior exhibition. And this tight focus on personalities, rather than on historical movements or public events, will also be reflected at other leading British galleries and museums.

In late April the Design Museum in London will mark the 20th anniversary of the death of the filmmaker Stanley Kubrick. The exhibition will feature rooms, each themed around his films, including Barry Lyndon, 2001: A Space Odyssey, Full Metal Jacket, A Clockwork Orange, The Shining, Paths of Glory, Spartacus, Lolita, Eyes Wide Shut, and Dr Strangelove. Visitors will enter the exhibition on a replica carpet from The Shining, before heading to a “one-point perspective” corridor intended to mirror Kubrick’s trademark camera technique.

Commenting on the exhibition, Steven Spielberg has said: “Stanley was a chameleon with the astonishing ability to reinvent himself with each new story he told.”

Tate Britain’s new show about Van Gogh’s time in Britain, and the British Museum’s exhibition about Edvard Munch, will offer visitors an insight into the artists’ turbulent psyches.

The Art Newspaper’s survey will be published and will coincide with the release of the Association of Leading Visitor Attractions’ annual figures, which will shed further light on the impact of last year’s extreme weather, from the Beast from the East to the hot summer, on the numbers heading for a wider selection of attractions.