Magnum ice cream, the chocolatiers of ice cream, has partnered with luxury Dutch fashion designer, Iris Van Herpen – one of the industry’s most talented and forward-thinking creatives – to design a Haute Couture vegan dress inspired by the iconic Magnum vegan ice cream.

Unveiled during Paris Fashion Week at Elysée Montmartre, the Magnum Vegan Dress was revealed to the world as Cindy Bruna took to the runway in Iris Van Herpen’s 15th Anniversary show debuting the unique design to the world and paving the way as Magnum ice cream’s first steps into circular fashion.

The Magnum Vegan Dress is a celebration of Magnum ice cream’s vegan range; an expertly crafted and award-winning collection of delicious, plant-based indulgence and 100% Magnum ice cream decadence, without any dairy.

Magnum ice cream believes a day without indulgence is a day lost, and that everyone should be able to pursue what brings them joy, whatever this may be. This campaign brings together Magnum ice cream fans from across the world to indulge in the decadence of plant-based deliciousness and invites them to experience and celebrate Magnum Vegan through an all-new fusion of cocoa and haute couture. 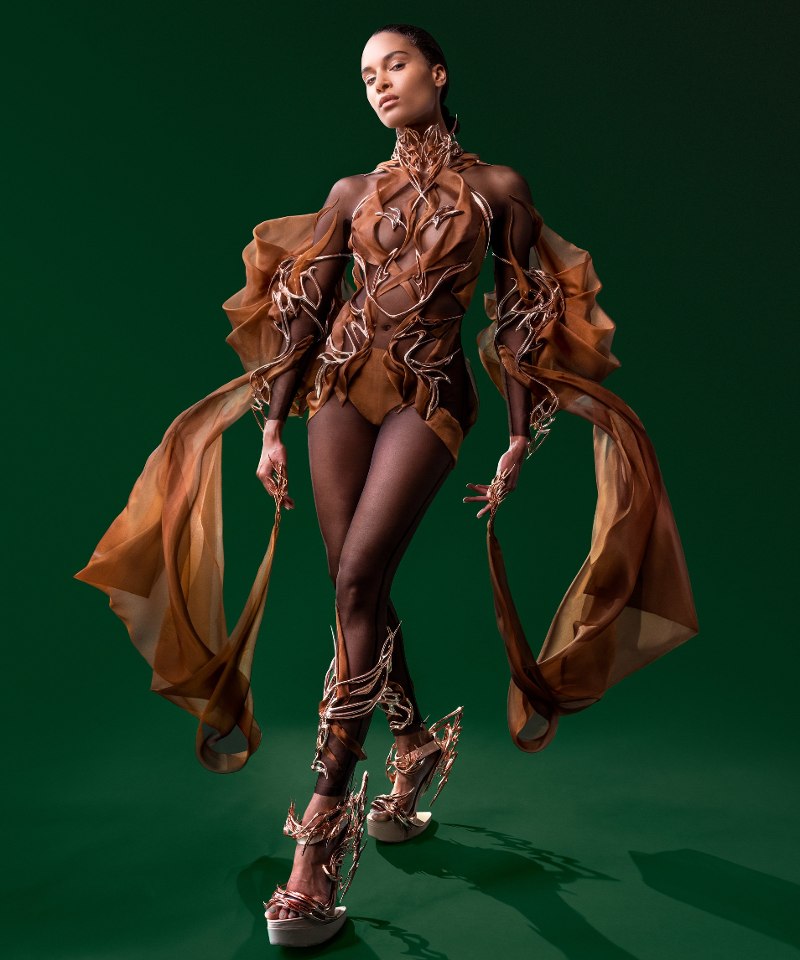 The first of its kind for the brand, the Magnum Vegan Haute Couture Dress has been designed and created using an intricate 3-dimensional design, incorporating sustainable materials that reference Magnum ice cream’s vegan ingredients in an indulgent fusion between the brand’s iconic melting chocolate and Iris’ luxurious fluid designs. With the aid of 3-D printing technology, the Magnum Vegan Dress is also the first haute couture dress to be made from cocoa bean husks, which have been processed to create a fully organic biopolymer material.

The dress features intricate details including plantlike body embellishments which are copper-coated, draped and entwined with upcycled and pliseed organza, while other 3-D elements have been printed using innovative SLS technology (Selective Laser Sintering).

The creation of the Magnum Vegan Dress marks a dynamic collision between ice cream and haute couture, supporting both Magnum ice cream and the Maison of Iris van Herpen’s ambitions to work towards a fully sustainable production chain within the fashion industry and beyond.

“I am honored to have been approached by Magnum ice cream as a partner to bring to life the Magnum Vegan Dress. As a designer, I have always worked to push the boundaries of design and this collaboration has really allowed us to take this one step further by linking the ingredients of an iconic Magnum Vegan to create a haute couture design. The opportunity to work with the brand on such an innovation in sustainable fashion has been a very special experience,” – Iris said about the collaboration.

“What an honor to be able to reveal the Magnum Vegan Dress to the world – and to be able to do this at Iris’ 15th anniversary show just makes this even more special. Bringing together ice cream and haute couture in such an unexpected and impactful way is so exciting, making this a partnership that I am delighted to be a part of,” – said Cindy, who modeled the Magnum Vegan Dress. 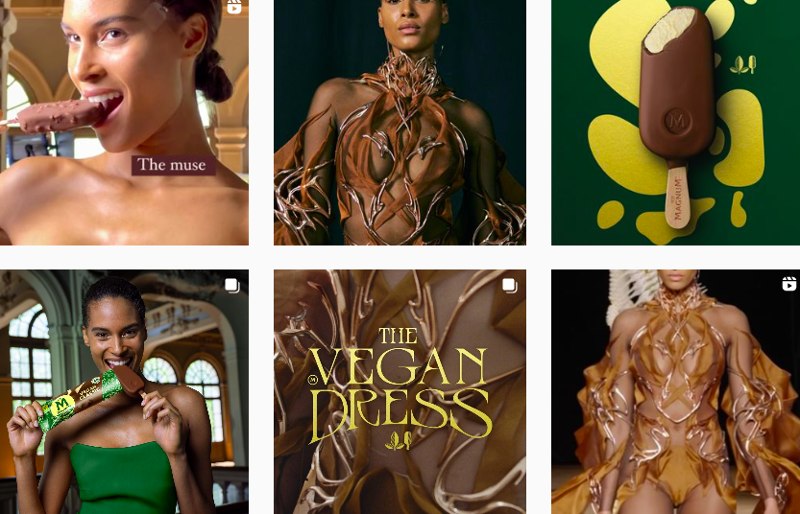 The Magnum Vegan Dress is part of Iris van Herpen’s 15th anniversary collection entitled “Meta Morphism”. The collection explores society’s embrace and acceptance of a new world of digitalism with the arrival of the Metaverse and how this is becoming an increasingly prevalent part of everyday life. Inspired by Ovid’s canonical poem “Metamorphoses”, the designer breaks down the lines between reality and digital realms in a futuristic, avant-garde collection designed to inspire and evoke the question of who we are beyond a perceived reality.

Magnum ice cream aims to strengthen its long-term commitment to fashion by announcing its intended partnership with the University of Leeds. The brand intends to commission a research project with the Leeds Institute of Textiles and Colour (LITAC) in the School of Design to further this commitment and look at how Magnum ice cream can bring to life accessible, sustainable fashion using by-products from its core ingredients. This is part of the brand’s long-term commitment of putting sustainability at the heart of the brand and working towards revolutionizing its waste product into a viable, circular solution inspired by its longstanding inspiration from fashion.

FAIRTRADE AMERICA LAUNCHED “IT’S ONLY FAIR” CAMPAIGN ASKING HOW LONG AMERICANS WOULD WORK FOR JUST $1 TO RAISE AWARENESS OF THE UNFAIR PRICE COCOA FARMERS EARN FOR THEIR BELOVED CROP.

Globally, cocoa and chocolate together are a $48.29 billion industry that is expected to grow, yet cocoa farmers are currently battling inflation, rising production costs, the climate crisis and COVID-19 related challenges while the price they earn for cocoa hasn’t risen to meet these changes. As they navigate these challenges, they are asking for the same fair business practices and respect any entrepreneur would desire – a fair deal – so they can have a sustainable future in farming.

Smallholder, family-run farms with less than five acres of land and average yield between 1,300-1,760 lbs per year of cocoa provide 90% of the world’s cocoa beans. The cocoa industry is an important source of revenue for about 50 million people, including 5 million farming households. 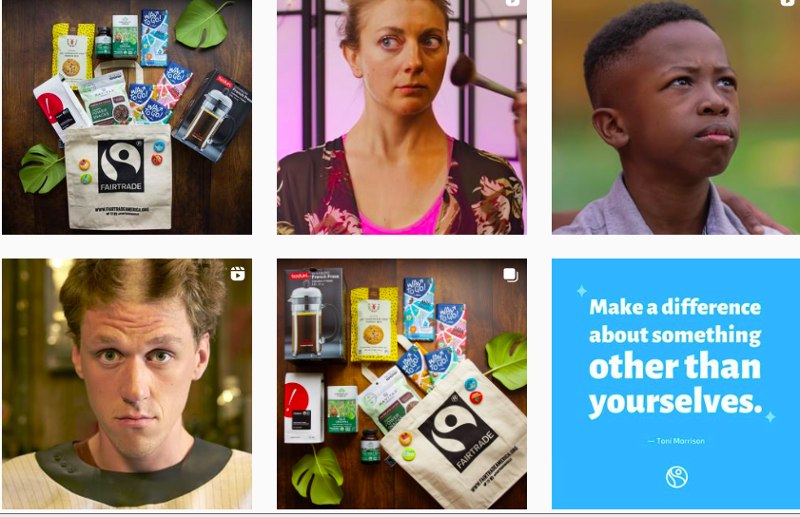 Fairtrade America, the world’s most recognized label for social justice and sustainability, has launched a national campaign to generate broader awareness of the unjust price that farmers receive to produce the goods that we rely on everyday, including cocoa.

The “It’s Only Fair,” campaign features three videos connecting shoppers in the U.S. to smallholder cocoa farmers in West Africa and the dire issues farmers are facing around the world by disrupting people’s routines with the simple question, “How long would you work for $1?” Because of the unfair and unjust realities of the global food market, many cocoa farmers work an entire day for between $0.78-$1.00. That’s significantly below the international poverty line. Through this new campaign, Fairtrade America hopes to turn this big global issue into a more relatable problem, inspiring viewers to pause, reflect, learn and share about the impact unfair trade has on farmers and workers around the world.

Because of unfair trading practices, many farmers and workers around the world can’t make a living wage, no matter how hard they work. Extreme poverty can also lead to other problems, like deforestation and child labor. Farmers are forced to answer unthinkable questions, like “Should I preserve this forest? Or should I clear it to feed my family?” These problems aren’t new. For decades, corporations and governments have seen and ignored them or failed to address the root of the issue – poverty. The promising news is that as more and more consumers demand change, companies and governments will need to take action. A recent study found that shoppers in the U.S. are willing to pay up to 30% more per bar for Fairtrade chocolate, so why aren’t we?

“Farmers aren’t getting a fair deal. This is not only unjust, it is also unsustainable,” shared Peg Willingham, Executive Director of Fairtrade America. “Fairtrade believes that everyone deserves a decent standard of living. It’s only fair to pay a price that supports an existence worthy of human dignity.” 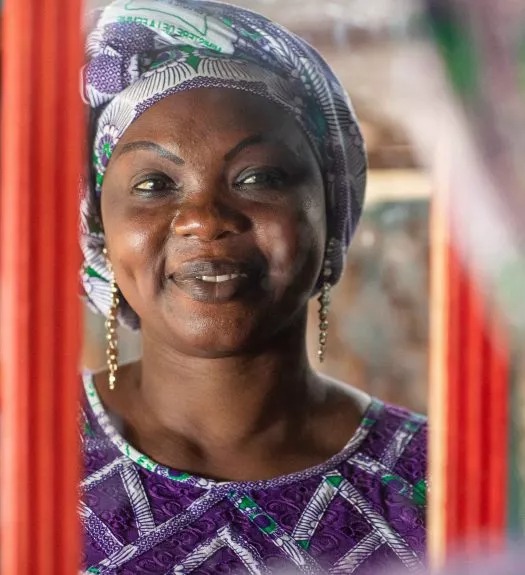 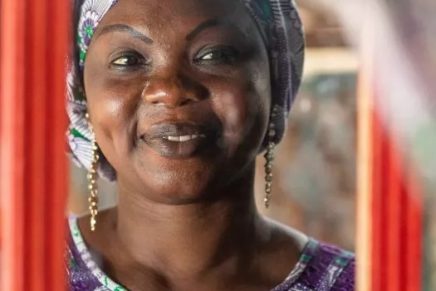 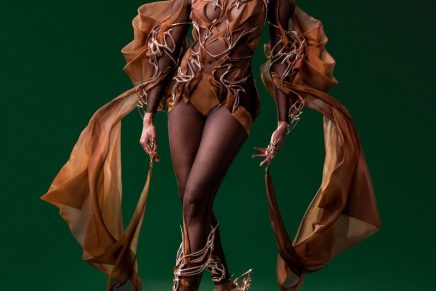 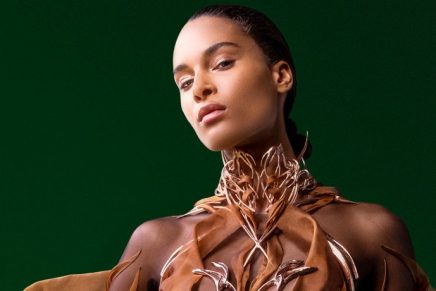 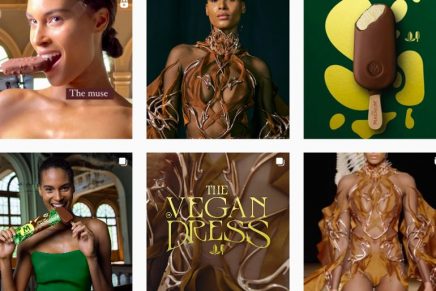