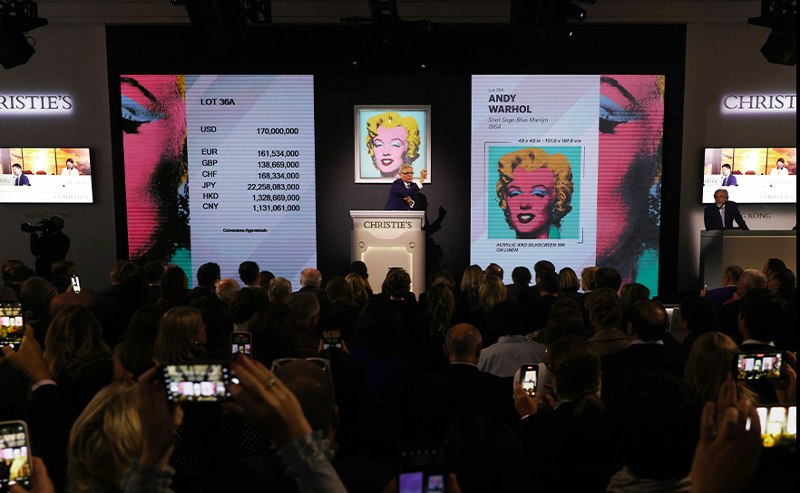 9th of May was a historic day for Christie’s auction house and for the entire contemporary art market. The record-breaking sale of Warhol’s iconic portrait of Marilyn Monroe from the Collection of Thomas and Doris Ammann is a testament to the strength, the vibrancy, and the overall excitement of the art market today.

Monday, May 9, 2022 Christie’s Spring Marquee Week of sales began with the momentous sale of Shot Sage Blue Marilyn by Andy Warhol, selling for $195 million, establishing it as the most expensive 20th century artwork to sell at auction. The painting was the final lot of Christie’s single-owner evening sale The Collection of Thomas and Doris Ammann, which featured 36 lots and totaled $317.8 Million.

The art sale was 98% sold by value, demonstrating strong demand from collectors and confidence in the art market.

The sale attracted participation from bidders in 29 countries, with 68% of lots selling above the high estimate. Additional highlights from the sale include record prices for six artists. Francesco Clemente’s The Fourteen Stations, No. XI, sold for three times the previous record at $1,860,000, with bids coming from at least nine bidders. Ann Craven’s I Wasn’t Sorry, 2003 achieved eight times the previous record, fetching $478,800, with competition from 15 bidders. The other records were: Mike Bidlo (three times the previous record), Mary Heilmann, Martin Disler, and Ross Bleckner. After Warhol’s Marilyn, the top lots were Cy Twombly’s Untitled, which achieved $21 million; Robert Ryman’s Untitled, which sold for $20.1 million; and Cy Twombly’s Venere Sopra Gaeta, at $16.9 million.

The sale of the collection will continue on May 13 with a dedicated day sale.

“This sale demonstrates the pervasive power of Andy Warhol as well as the lasting legacy that he continues leave behind in the art world, popular culture, and society.”– Alex Rotter, Christie’s Chairman of 20th and 21st Century Art,

“For 250 years, Christie’s has proudly stewarded the greatest art objects throughout generations and tonight, we yet again made history. The funds that we have raised tonight with the sale of this exquisite collection will go directly toward improving the health and well-being of children and young adults. Philanthropic initiatives are of the utmost importance to our core values at Christie’s; we believe giving back to our global communities to be essential. It has been a true privilege and honor to work so closely with The Thomas and Doris Ammann Foundation in organizing such a generous sale.” – Marc Porter, Christie’s Chairman.

Proceeds from the entire sale will be generously donated by the Thomas and Doris Ammann Foundation to benefit charities providing urgent medical and educational services to children. The buyer of Warhol’s Marilyn has been invited to partner with the Foundation and play an active role in fulfilling its global mission for children’s aid, with the opportunity to nominate the charities to which 20% of the work’s proceeds will be allocated, subject to the Foundation’s final approval.