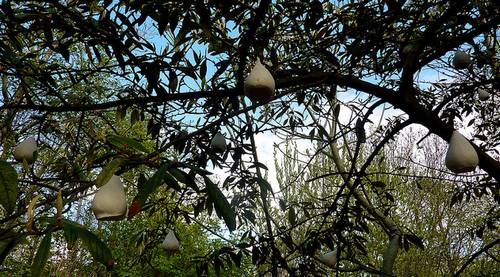 The western fringes of Hampstead Heath conceal some of its best features. The Italian pergola is one of the most romantic places in London. It’s a zig-zagging walkway of curling vines, raised above the surrounding parkland. The western balcony, with views out to Harrow, is like something from a period drama. Down below, the ornamental hill garden is dotted with shrubs and flowers. It’s then only a short walk to Golders Hill Park, where wallabies mingle with exotic birds in the small zoo.
• Off North End Way, NW3, hampsteadheath.net

The back of King’s Cross station is currently a bit of a mess. The former railway lands are undergoing major redevelopment, and cranes will dominate the landscape for some years to come. Camley Street natural park is two acres of serenity among this turmoil. A series of ponds and reed beds nestling up against the Regent’s Canal offer a welcome haven for birds and small mammals, as well as passing pedestrians.
• 12 Camley Street, N1, 020-7833 2311, wildlondon.org.uk, open Sun-Fri 10am-5.30pm

The other interesting development at the back of King’s Cross is the new home for Central St Martin’s College of Art and Design. The art school moved into the complex in late 2011, bringing new life to an 1851 granary building, which has been tastefully converted for its new function. The old building is a public space with regular displays of art and performance pieces. Outside, leaping fountains and a stepped terrace leading down to the canal make for an attractive setting. And you’re only a short walk to the Guardian HQ, round the corner in Kings Place.
• 1 Granary Square, London N1, csm.arts.ac.uk

Alight at Colindale tube station and follow the signs to this superb collection of military aircraft. The sprawling museum contains so many magnificent flying machines that it would be fruitless to attempt it all in one visit. Just as you’re beginning to tire, you’ll encounter the mighty Vulcan bomber, dominating the corner of the main hangar like a giant obsidian moth. Even the most ardent pacifist would boggle at its presence.
• Grahame Park Way, NW9, 020-8205 2266, rafmuseum.org.uk/london, open daily 10am-6pm

This tiny green space and church pack more historical punch than many spots in London. Early feminist Mary Wollstonecraft was married and buried here. Her daughter Mary declared her love to Percy Shelley over the grave (she, of course, went on to become Mary Shelley). Sir John Soane (he of the museum) is also buried here, and his unusual grave inspired the red London phone box. A young Thomas Hardy exhumed numerous St Pancras graves to make way for the railways. The Beatles’ Hard Day’s Night was partly filmed here. Oh, and it also happens to be one of the oldest sites of Christian worship in the country. Phew!
• Pancras Road, NW1, victorianweb.org/art/architecture/london

A trip up to Chingford, on the northern fringes of London, offers the pleasant option of a walk in Epping Forest. But before you do so, take a peek in this rare Tudor survival on the edge of the woods. Queen Elizabeth’s Hunting Lodge dates to her father’s reign in 1543, when the increasingly corpulent Henry VIII sought greater luxury while out hunting. Modern-day visitors can learn about the Tudor kitchen and imagine taking pot shots at the deer of Chingford Plain. The small venue is especially geared up for families, with regular activities and events, and a well-stocked dressing-up box for the little ones. The View, a new interpretation centre, with community room, exhibition space and gift shop, opened this summer.
• Ranger’s Road, E4, 020-8529 6681, cityoflondon.gov.uk, open daily 10am-5pm

Matt Brown is editor of the Londonist