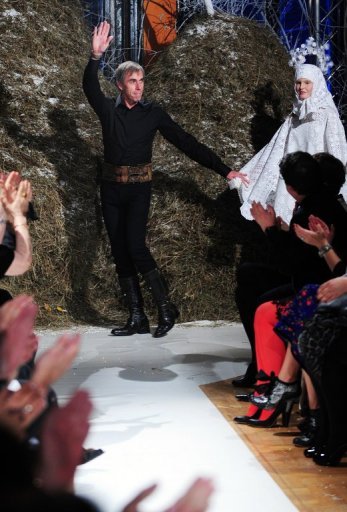 Sheepskin skirts and delicate bead embroidery shone on a Bucharest catwalk in a one-of-a-kind ethnic fashion show blending the skills of a French designer and centuries-old Romanian handicraft.

The vibrant display was meant to counter some of the negative labels sticking to this country, often dismissed as a drab post-Communist outback, but in fact a rich melting pot of Latin, Balkan, Hungarian, Slav and Roma influences.

Entitled “Prejudice“, the women’s clothing line created by Philippe Guilet, who previously worked with Karl Lagerfeld, Thierry Mugler and Jean-Paul Gaultier, is to be shown in Paris early next year.

“Romania is often derided, but actually this country is quite the opposite of what people might think,” said Guilet, who has spent the past four years here.

The former research director for Jean-Paul Gaultier has launched a cultural project called “100%.RO” that aims to reinterpret Romanian’s heritage.

Some fifty local artisans contributed to the show, set against the elegant backdrop of the French embassy in Bucharest, decorated for the occasion with barren trees and haystacks as if caught in a snow storm.