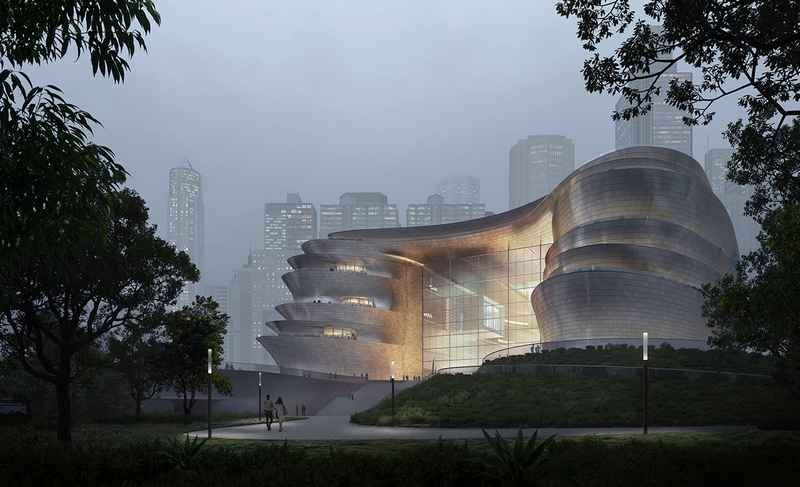 Dame Zaha Hadid was never far from controversy in her lifetime, nor has she been since her death. In the four years since the celebrated Iraqi-born architect died suddenly in March 2016, a “toxic dispute” has been taking place between the executors of her estate, with claims and counterclaims filed over the interpretation of her wishes and the future of her architecture practice. The long-running feud has finally been settled in an explosive court hearing involving contested allegations of financial mismanagement, disregard for corporate governance and “clandestine relationships” between the current practice principal and junior members of staff.

In a remote hearing conducted via Skype, the court was told that, after years of negotiations, the four executors of Hadid’s will trust had finally reached an agreement over the distribution of her estate, which is now valued at around £100m – bar one detail. The agreement will see the bulk of Hadid’s assets go to the Zaha Hadid Foundation, a charitable body, with plans to establish a museum and award scholarships, focused on supporting the architectural education of Arab women in particular.

Meanwhile, shares in the architecture practice, Zaha Hadid Ltd (ZHL), are to be transferred to a tax-efficient employee benefit trust, chaired by her long-term collaborator and practice principal, Patrik Schumacher. But the executors remained in deadlock over one point of the trust’s board structure, which was surrendered to the court to decide.

In submissions made to the court, Schumacher, who is also an executor of Hadid’s estate, insisted that he be given personal powers of veto over the company’s board of trustees. His counsel argued that such a move was in line with Hadid’s instruction in her letter of wishes, that he should “be in control of the business” as far as practicable. The other three executors – comprising the stained glass artist Brian Clarke, Hadid’s niece Rana Hadid, and property developer Peter Palumbo – strenuously resisted this request, alleging that Schumacher had a track record of abusing veto powers, had failed to distinguish conflicts of interest and had a “lack of commitment to basic principles of corporate governance”.

In their submissions, the defendants sought to rely on two damning reports from independent legal investigations that were highly critical of Schumacher’s behaviour. One focused on issues of corporate governance, while the second concerned allegations of his inappropriate relationships with junior staff. Both were prompted by whistleblowing complaints.

According to the submissions, the former report, produced in 2019, identified “numerous failings of corporate governance” at ZHL, highlighting Schumacher’s track record of abusing veto powers and his failure to distinguish between his own interests and the interests of those to whom he owes fiduciary duties. Schumacher also vetoed the payment of legal fees incurred by the investigation, the court was told.

The defendants also referred to a second report, produced this year, which found that Schumacher had pursued sexual relationships with multiple junior staff members, and said there was a case to answer that he had “used his position to push for significant pay rises, promotions and educational opportunities for staff he is in a romantic relationship with that are not based on merit and are in excess of what others are receiving”.

In their submission, the trustees claimed that Schumacher attempted to veto the investigation and refused to cooperate with it, “making it impossible for ZHL properly to investigate his alleged wrongdoing”. He is understood to be in a relationship with one of the junior staff in question, with whom he has a child.

Schumacher’s counsel submitted that the court “should not go down the route of considering and determining all of the factual disputes that have arisen in these proceedings”, describing the allegations submitted by the defence as “contested and unproven”.

Part way through the day-long hearing to “bless” the agreement, the presiding judge, chief master Matthew Marsh, ruled against Schumacher’s request for a veto. The judge concluded that Schumacher “would be in a very difficult position with regard to conflicts of interest” if such powers were granted. Visibly pained to have witnessed the years of costly squabbling, Marsh described the disagreement as a “toxic dispute”, adding that Hadid “didn’t wish for this dispute, which is the real tragedy”. All legal costs, which run to several million pounds, will be taken from Hadid’s estate.

The judge stated that he came to his conclusion on the basis of an “objective review of the position”, without the need to consider what he described as “highly contentious evidence” that “might give rise to real concerns” were it to be considered. He suggested that the defendants were “very close to saying that [Schumacher] is not fit to take any fiduciary position at all”. If that were the case, “how could such a person be a director?” he asked. In his ruling, he stressed that he expressed “no view whatever about that evidence” and made “no findings of fact in relation to it.”

The hearing exposed the dramatically frosty nature of the dispute between the trustees, which has escalated bitterly over the years since Hadid’s death. Divisions between Schumacher and his fellow executors were first revealed when the outspoken libertarian architect made headlines in November 2016, as he publicly called for the abolition of social housing and the privatisation of cities, arguing that developers should be allowed to build on Hyde Park.

State-funded arts schools, he added, were “an indefensible anachronism”. The other three executors were quick to distance themselves from his comments. “Knowing Dame Zaha as well as we did,” they said in a statement, “we can state categorically that she would have been totally opposed to these views and would have disassociated herself from them. We personally also totally disagree with these views.”

Schumacher issued legal proceedings in November 2018 in a bid to become sole executor of Hadid’s estate, seeking to remove Clarke, Hadid and Palumbo. He alleged that the three acted “with unjustified hostility” towards him and “undermined ZHL’s ability to continue as a going concern”. He said that their joint statement had “cast doubt on [his] ability to run ZHL in keeping with the principles adopted in Hadid’s lifetime”.

He also claimed that they blocked him from speaking at Hadid’s funeral at St Paul’s Cathedral and ensured that he was not invited to a memorial dinner at the Serpentine Gallery, allegations that the trustees have denied. A trial was scheduled for September 2019 but postponed when the parties reached heads of terms that month. It has taken a year since then for the terms of the settlement agreement to be resolved.

The contents of Hadid’s estate include thousands of paintings, sketches and architectural models, which have finally been catalogued by the foundation after delays caused by the trustees’ disagreements, as well as several valuable properties in Miami and London. The primary monetary value transferred to the foundation came from the shares in Hadid’s several companies, including the product design arm Zaha Hadid Design, the value of which increased significantly since Hadid’s death – principally because of a lucrative contract with jewellery brand Bulgari for the design of a ring that retails for £2,200.

Schumacher did not respond to a request for further comment but Zaha Hadid Architects, of which he is principal director, issued the following statement: “Zaha Hadid Architects is dismayed by the unfounded allegations being made against Patrik Schumacher. The allegations are unproven, contested, and must be considered in the context of a long-running, acrimonious dispute between the trustees of Zaha’s estate. Patrik began working with Zaha Hadid in 1988 and their near 30-year collaboration is the foundation of our success. Under his leadership, we continue to build upon the legacy Zaha and Patrik established together over almost three decades.”