LVMH Moët Hennessy Louis Vuitton, the world’s leading luxury products group, recorded revenue of €19.9 billion for the first nine months of 2012, an increase of 22% on the comparable period in 2011. After taking into account the integration of Bulgari, as of30 June 2011, and a positive currency impact, organic revenue grew by 10%.

LVMH Moët Hennessy Louis Vuitton luxury group recorded a 15% rise in revenue for the third quarter. Organic revenue growth was 6%, a good performance in the current economic environment, particularly when compared to the strong performance in the same period of 2011. The US market continued to demonstrate solid momentum. In spite of a mixed business environment, Europe and Asia also contributed to the third quarter performance. Louis Vuitton continues to gain market share throughout the world, said the luxury conglomerate in the official statement.

Despite the background of an economic slowdown in Europe, LVMH remains confident in its outlook for 2012. 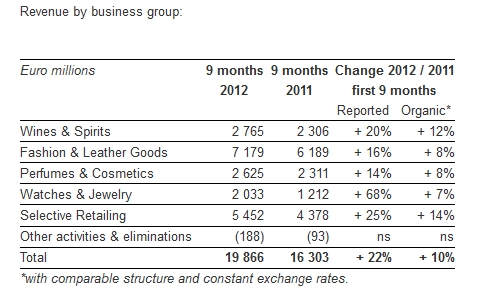 The Watches & Jewelry business group recorded organic revenue growth of 7% for the first nine months of 2012. LVMH’s watch brands made further progress driven by their iconic ranges and innovation.

The luxury Perfumes & Cosmetics business group registered organic revenue growth of 8% for the first nine months of 2012. Christian Dior continued to show strong momentum underpinned by the growth of its iconic perfumes and the relaunch of Dior Addict, backed by a new publicity campaign. The makeup and skincare segments also contributed to the strong performance thanks to the Prestige range and the new Diorskin Nude products. Guerlain benefited from the successful launch of La Petite Robe Noire and solid progress with its Orchidée Impériale skincare products. Givenchy benefited from broadened distribution of its makeup range. Benefit continues to achieve strong growth thanks to its They’re Real mascara. Fresh opened its first store in the Chinese market. 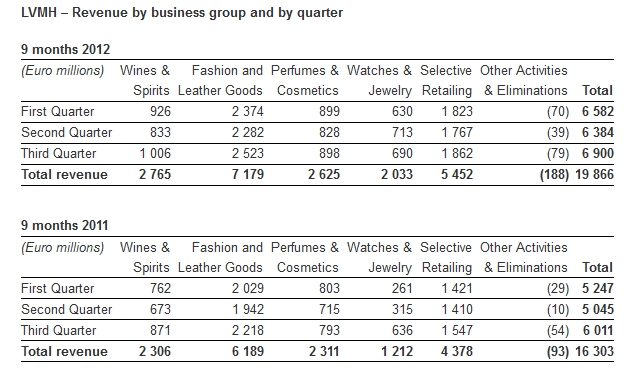