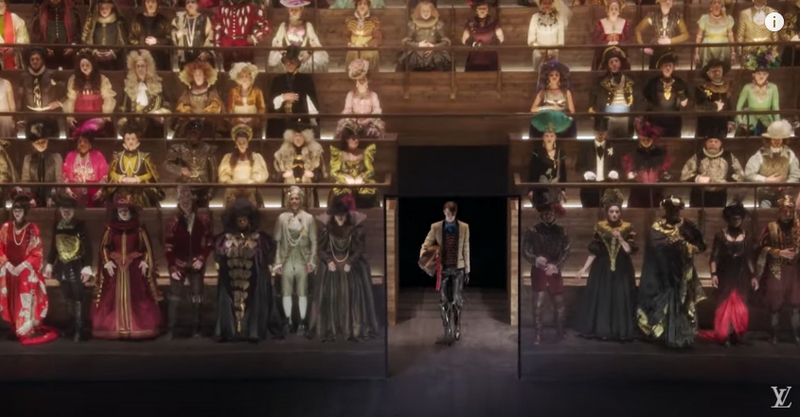 The Louvre is currently closed to visitors due to staff concerns about coronavirus, but the Louis Vuitton show must go on. The museum reopened its doors on Tuesday evening for the world’s most valuable luxury brand to close Paris fashion week, with a catwalk show staged in the inner courtyard of the museum.

The last fashion show of a month in which the disruption of cancelled shows and the chilling images of designer face masks have been a circus hall of mirrors held up to an anxiety-ridden zeitgeist was, appropriately, a climactic costume drama.

A 200-person choir in period dress spanning 500 years was the backdrop for what designer Nicolas Ghesquière called a “collision of times”. A 17th-century Cavalier in curls and feathered hat sat next to a flapper in lacquered bob and strings of pearls; there was a 1950s housewife, and an Edwardian gentleman with watch fob and waistcoat. The choir’s wardrobe was the work of Milena Canonero, a costume design collaborator of Stanley Kubrick, whose films have spanned three centuries from the 18th-century setting of Barry Lyndon to 2001: A Space Odyssey and the dystopian future of A Clockwork Orange.

“I wanted a group of characters that represent different countries, different cultures, different times,” Ghesquière told Vogue. “I love this interaction between the people seated in the audience, the girls walking, and the past looking at them – these three visions mixed together.”

Juxtapositions of fashion history are a signature of Ghesquière, whose catwalks have blended sci-fi with baroque, and the belle époque with the 1970s.

This collection mashed Toulouse-Lautrec petticoats with motocross jackets, and garish sportswear graphics with dandy tailoring. For the all-important accessories, Ghesquière travelled back in time to treasures in the Louis Vuitton archive. Classic luggage trunks and the logo-stamped Keepall holdall – which he called “a pure vintage piece that acquires a beautiful patina over time” – were scaled down in size and swung by shoulder straps.

As well as being a showcase for Vuitton’s next collection and a finale for Paris fashion week, the event was a curtain-raiser for the upcoming Costume Institute at the Metropolitan Museum. About Time: Fashion and Duration, which will open with the annual fashion extravaganza of the Met Gala on 4 May, is sponsored by Louis Vuitton and co-chaired this year by Ghesquière alongside Anna Wintour, Lin-Manuel Miranda, Meryl Streep and Emma Stone.

Curator Andrew Bolton told a press conference this week: “In recent years, time has dominated discussions within the fashion community. These talks are centred around the accelerated production, circulation, and the consumption of fashion in the 21st century. So we thought it might be an opportune moment to explore the temporal character of fashion from a historical perspective.”