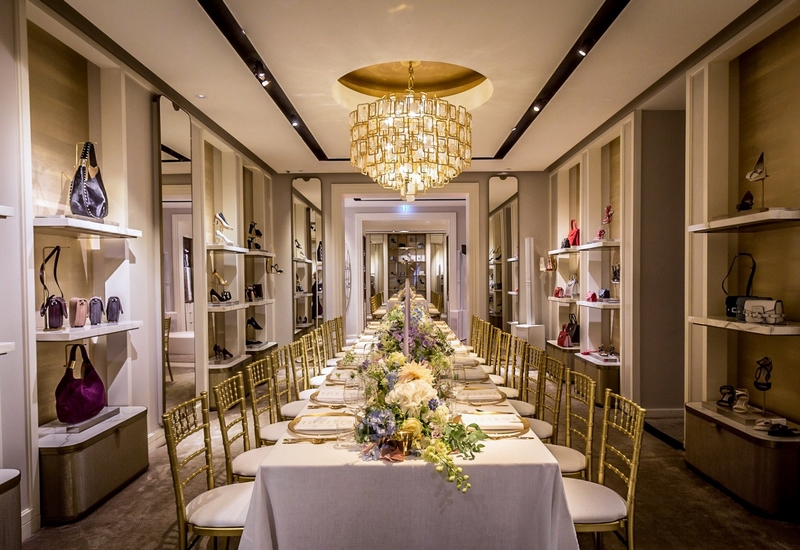 Host an incredible private dinner for up to 40 guests in one of Jimmy Choo’s stores. Jimmy Choo The Private Dinner; photo: jimmychoo

This article titled “What to buy the super-rich this Christmas? A luxury experience, of course” was written by Rupert Neate Wealth correspondent, for theguardian.com on Friday 21st December 2018 15.00 UTC

The present-buying struggles of the richest 1% have led luxury goods companies to devise a range of “exceptional experience” gifts that are “always indulgent” and, of course, very extravagant.

If there is a fan of high heels to rival Imelda Marcos in your life, how about treating them to a private dinner inside Jimmy Choo’s flagship Bond Street store? The company promises that those buying private access to the store will be able to “dine and shop in style, entirely privately”. Hiring out your choice of Jimmy Choo stores – from London, Rome, Milan or Vienna – costs a minimum of £60,000.

Victoria, a Jimmy Choo personal shopping executive, says the private dinners promise to be “really, really extravagant with no expenses spared. We will work with you to make it the dinner of her dreams,” she says when a Guardian reporter poses as a member of the 1% interested in hiring out the store for his sister.

“We will create a three-course meal with all of her favourite things. We decorate the store with the most amazing floral arrangements and she and her friends will have the chance to shop the collection. This is an opportunity to really show you’re a Jimmy Choo fan.”

Jimmy Choo shoes, which range in price from £250 for wellies to £2,750 for diamond trainers, are not included in the offer, though Victoria said guests would “walk away with a small goodie bag”.

The company, which was founded by the designers Jimmy Choo and Tamara Mellon in 1996 but is now owned by Michael Kors, also suggests customers might like to buy a leather shoe trunk for £45,000 – which again does not include any shoes. The Bond Street store has sold out of the Memento trunk but the company says it can be ordered from other stores in Europe.

“I wanted to unashamedly celebrate a woman’s love affair with shoes and create a one-of-a-kind environment to house her most treasured pairs,” Sandra Choi, Jimmy Choo’s creative director and niece of Choo’s wife, Rebecca, says. “I wanted the trunk to be exceptional and to be the ultimate expression of luxury and glamour.”

Watine Arnault says she launched the Clos19 club to allow customers behind-the-scenes access to the “extraordinary world” of LVMH’s most famous brands, including Dom Pérignon and Krug champagne. “I realised that nobody was talking to me or my generation, it was all for connoisseurs,” she says. “The technical aspects – the right temperature, the right glass, the right pairing for champagne – can be a bit boring. But, if you look at it from a lifestyle perspective, where you can set a scene, it can become very playful.”

Her Christmas gift recommendations include an “epic experience” to Antarctica in which customers will discover a “breathtaking landscape while enjoying private ice-inspired tastings outside and fire-inspired dinners in the luxury camp”. The cost of the eight-day trip, which includes flights on a specially commissioned jet landing on a “custom-carved ice runway”, is not disclosed.

Other experiences offered by Clos19, which is named after the French term for a walled vineyard and a reference to the 19th century when champagne began to be widely consumed, include a trip to Cloudy Bay Vineyards in New Zealand, complete with a jaunt on a luxury yacht for £10,000.

For £12,000, Watine Arnault promises to fly couples by helicopter from London to the Berkshire village of Bray for lunch at Alain Roux’s three Michelin-starred Waterside Inn, featuring “a superb seasonal tasting menu, with Clos19 champagne pairings”.

The trip also includes a night at Cliveden House, a country estate that has welcomed guests including Charlie Chaplin, Winston Churchill and every British monarch since George I. On the return to London – not by helicopter – customers will be granted access to the Louis Vuitton private apartment on New Bond Street, where “rare antiques and artwork by the likes of Koons, Basquiat and Kapoor await”.