Pagani Huayra Tricolore: Only three examples will be Pagani built by as a tribute to the Italian Air Force Aerobatic Team.

The highest representation of aviation technology applied to a car: from materials to production processes.

The 313th Aerobatic Training Group – the official name of the Italian Air Force Department founded on 1 March 1961 at the Rivolto military base – better known as the National Aerobatic Patrol (Pattuglia Acrobatica Nazionale, P.A.N.) or the Frecce Tricolori, is heir to an all-Italian tradition of collective aerobatics with roots that go all the way back to the 1920s. With their ten Aermacchi MB-339A P.A.N. jets, nine flying in formation and one solo, the Frecce Tricolori are one of the most famous aerobatic patrols in the world. 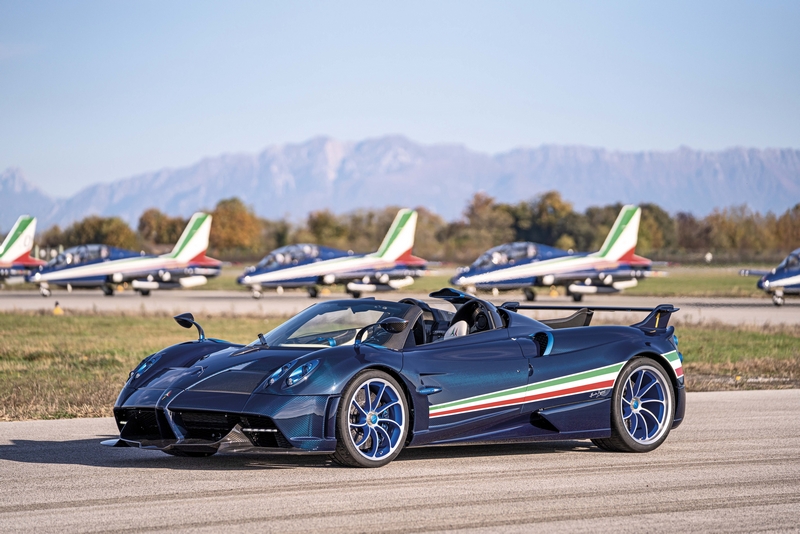 In 2010, Pagani paid tribute to 50 years of such excellence by presenting the Zonda Tricolore, a Hypercar of which only three examples were made. Today it is one of the most exclusive and sought-after Zonda models in circulation. In 2020, the Frecce Tricolori reach their 60th anniversary and Pagani unveiled a design that celebrates every detail of the Aermacchi MB-339A P.A.N.

A more pronounced front splitter with a completely new aerodynamic profile has been designed to ensure maximum downforce, while the new front bumper with side extractors maximizes the efficiency of the intercooler and ensures adequate heat exchange for the powerful Pagani V12, necessary to achieve maximum performance. Intake efficiency is also guaranteed by the new airscoop, equipped with an innovative air conveying system that allows for an even greater flow of cold air directly to the engine and, in its lines and extension towards the rear wing, evokes the visual language of the aerobatic patrol’s Aermacchi planes.

Careful attention to particulars, even the tiniest details of the Huayra Tricolore design celebrate the technical prowess of the Aermacchi MB-339A P.A.N.: this is the case of the rear wing supports, whose shape recalls the tail fin of the iconic jet and which display the number of the car on the outer side in the unmistakable lettering used to number the patrol aircraft. In the center of the front hood there is a Pitot tube, the instrument that allows each aircraft to measure the macroscopic air speed and, therefore, determine the aerodynamic condition of the aircraft, indicated by the resulting dynamic pressure: this is a reference to the world of aviation and a tribute to the aircraft of the Frecce Tricolori fleet. 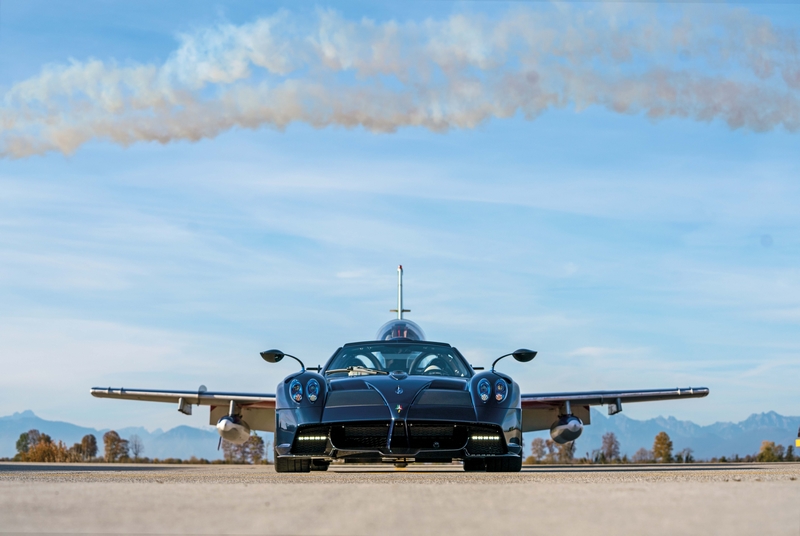 But the most direct and evident stylistic reference to this symbol of national excellence is provided above all by the external livery, where the tricolour runs along the side of the supercar.

The Huayra Tricolore is powered by the new Pagani V12, the twin-turbo engine specially developed by Mercedes-AMG, capable of delivering 618 kW (840 HP) at 5900 rpm and 1100 Nm of torque from 2000 to 5600 rpm in its latest version. All the power and exceptional responsiveness of the engine are transferred to the ground by the seven-speed sequential gearbox with electromechanical differential. The entire transmission system is 35% lighter than a dual clutch gearbox, while the transverse structure not only provides significant overall weight savings, but also helps to drastically reduce the effect of polar inertia, limiting the typical tendency to oversteer that normally affects mid-engined cars.

Packed with celebratory details, the seats, with the exclusive two-tone coloring in white and blue – recalling the original configuration of the Zonda Tricolore interior – and the leather inserts with white, red and green stripes, are a direct tribute to the patrol aircraft, with the unmistakable emblem of the Frecce Tricolori chiselled on the four-point seat belt fastener or finely embroidered on the headrests. The undisputed star of this symphony of aesthetic and technical details that is the Huayra Tricolore’s cockpit, is the anemometer of the central console that, through the outer Pitot tube on the front hood, detects the air speed and informs the occupants by means of a dedicated indicator. 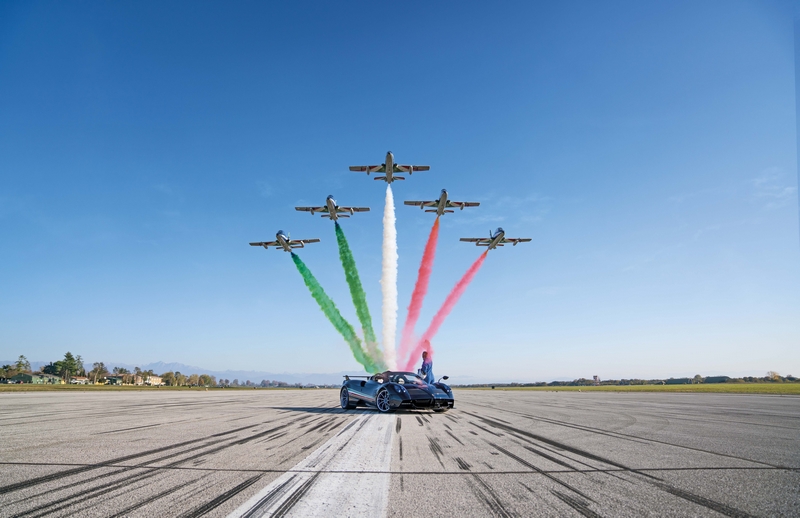 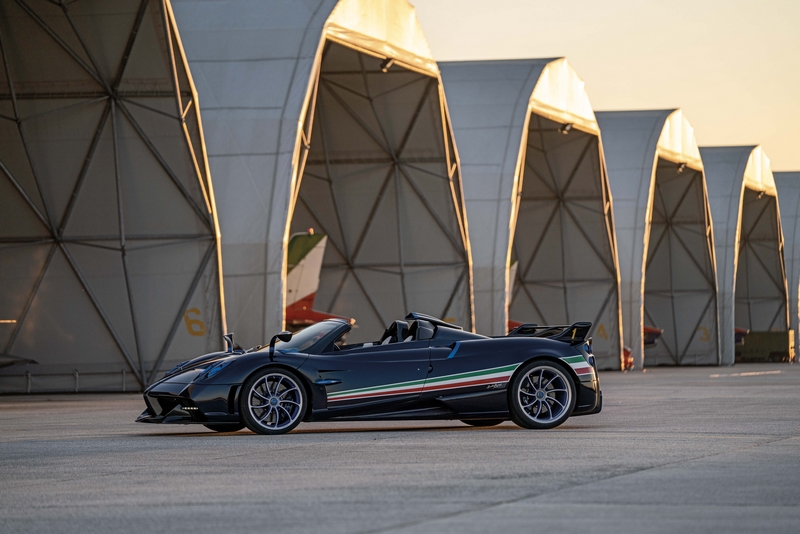 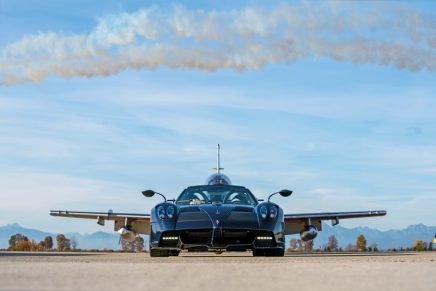 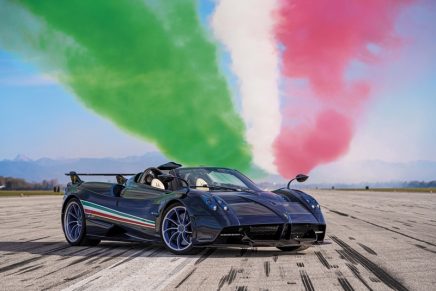 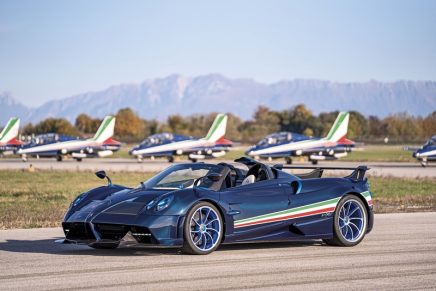 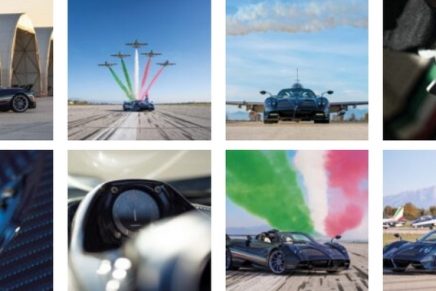 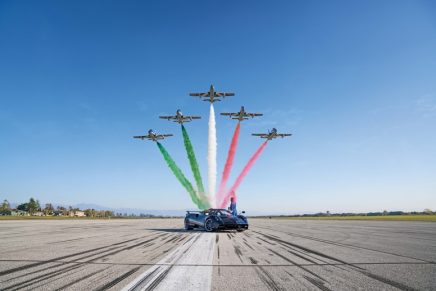 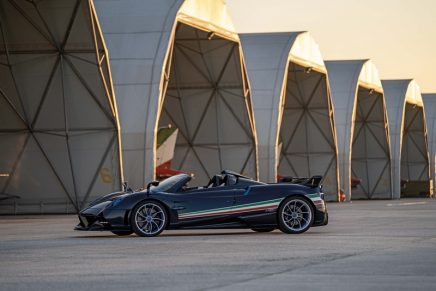