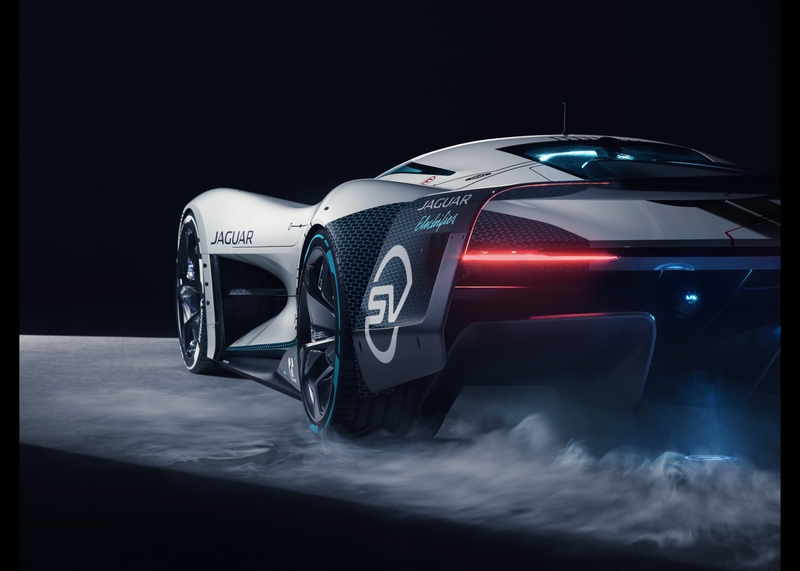 What an electric Jaguar endurance race car could be.

Fundamental to that process was detailed analysis of gamer feedback from online videos and forums. This ‘virtual world testing’ combined with many hours ‘behind the wheel’ enabled the design and engineering teams to determine exactly how to optimise the Vision GT SV to create the perfect electric gaming endurance race car.

Designed as the ultimate virtual endurance racer, the Jaguar Vision GT SV pays homage to its illustrious forebears not only in a host of styling and surfacing references but in its unique circuit board livery which nods to milestones such as the Le Mans debuts of the C-type and D-type in 1951 and 1954 respectively.

The streamlined, lightweight composite body structure now houses four Jaguar Racing and SV-designed electric motors to the Coupé’s three, generating a combined output of 1,903PS (1,400kW) and 3,360Nm of instant torque with the traction and dynamics benefits of intelligent all-wheel drive and torque vectoring. Acceleration from 0-60mph takes just 1.65 seconds, on the way to a maximum speed of 255mph.

The task of harnessing the Gran Turismo SV’s power to deliver an even more exhilarating racing experience for gamers fell to Jaguar’s SV engineering team.

The Vision GT Coupé’s elegant silhouette is still clearly recognisable in the GT SV, including the curvature of the C-type and D-type-inspired fenders, and – even with the additional motor driving the front axle – the wheelbase remains unchanged at 2,721mm.

Measuring 5,540mm from nose to tail, the GT SV is 861mm longer overall – a change driven entirely by aerodynamics. To deliver the increased downforce needed for greater traction for faster cornering and increased high speed stability on long straights, the GT SV has a new front splitter and a new deployable rear wing.

To solve the often conflicting requirements of increasing downforce while also minimising drag, the SV team worked with Jaguar’s designers to develop a full suite of features which work together to improve dynamics, stability, performance and efficiency.

In addition to the larger, more effective splitter – which produces downforce over the front axle – apertures in the front valance channel air across the face of the front wheels to reduce turbulence and help air to flow cleanly towards the rear of the car. Air passing through the wheel wells is also smoothed towards the rear via exit vents in the fenders.

The completely enclosed, sculpted underbody – which includes a keel element behind the front axle to aid high- speed stability – accelerates airflow, reducing its pressure and therefore helping to reduce lift, before it exits at the rear via a large venturi.

The single most effective aero feature developed for the GT SV is its deployable rear wing, inspired by endurance racing cars from Jaguar’s rich lineage, including the XJR-14. Meticulously developed from concept to final design through many iterations, the wing’smain, fixed, section wraps over and around the back of the car, blending smoothly into the rear haunches.

The wing is designed as an integral element of the sculpted bodywork while also providing the aerodynamic performance required for endurance racing: two moveable sections automatically rise at speed to deliver extra downforce when needed but drop back to their nominal positions to minimise drag. 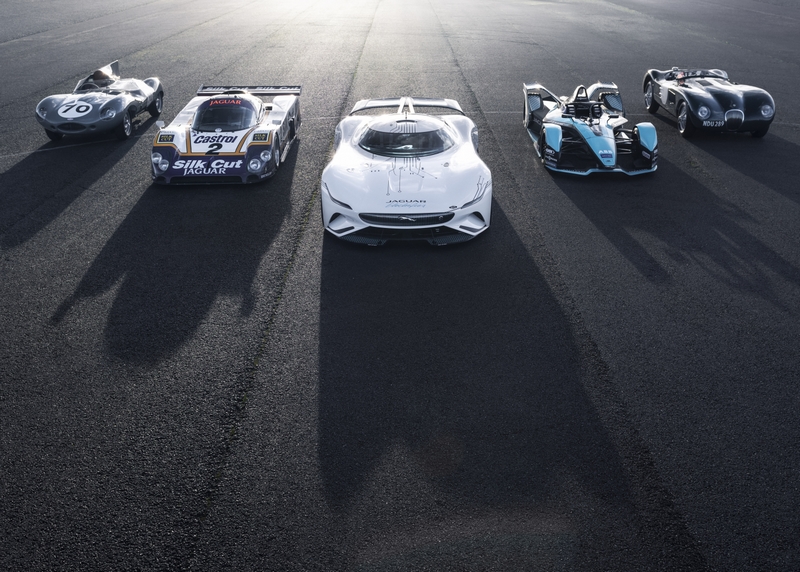 Reflecting the increase in power and torque from the four electric motors to its precursor’s three, the GT SV generates a sound that is even more purposeful and distinctive, and is authentically yet futuristically Jaguar. Building to a crescendo at the 40,000rpm redline, it reflects the GT SV’s true racing DNA and delivers unrivalled driver reward.

The experience is heightened by an interior designed for racing. The pure, sweeping surfaces within the cockpit truly envelop the driver and position the instruments and perfectly weighted controls exactly where they need to be. Every component is beautifully crafted with absolute precision from advanced lightweight materials, including the new TYPEFIBRE fabrics used to cover the two sculpted composite seats. TYPEFIBRE is an innovative system of performance materials being developed by Jaguar to deliver a lighter alternative to leather with outstanding comfort and durability. TYPEFIBRE fabrics will be tested by Jaguar Racing in the I-TYPE 5 during season 7 of the ABB FIA Formula E World Championship. 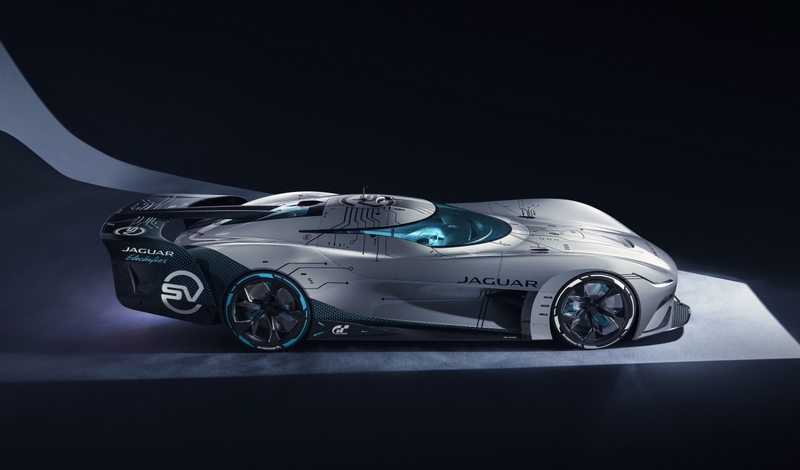 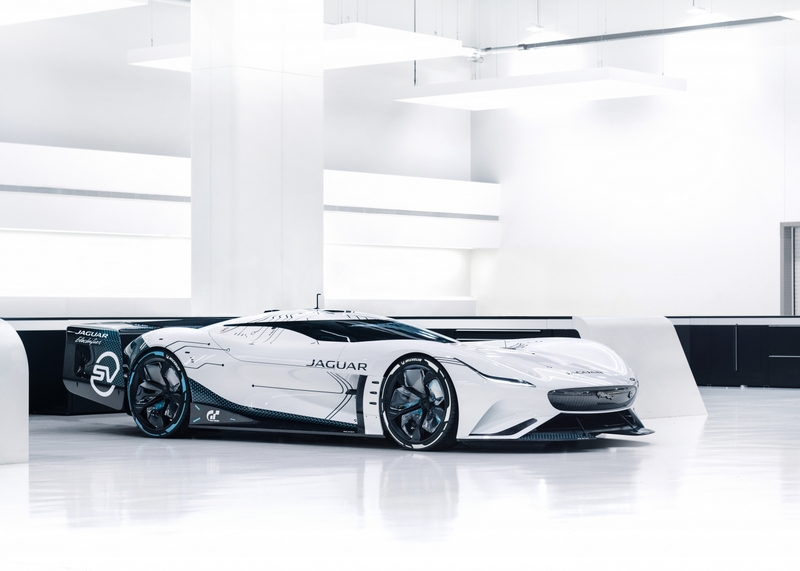 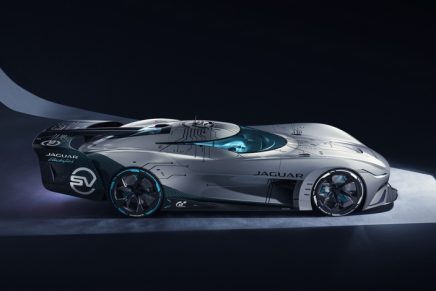 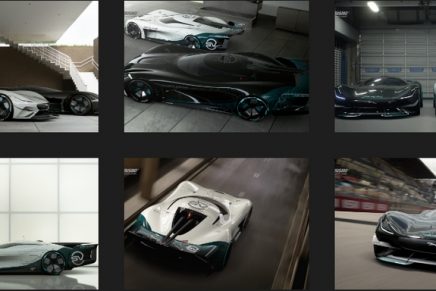 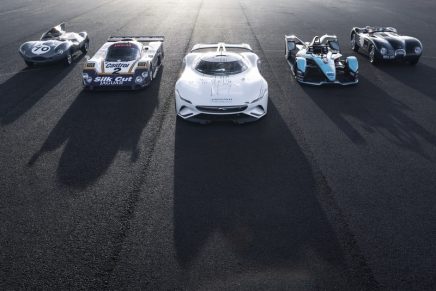 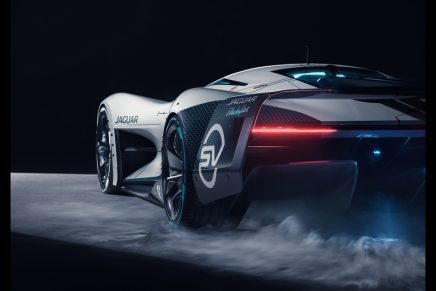 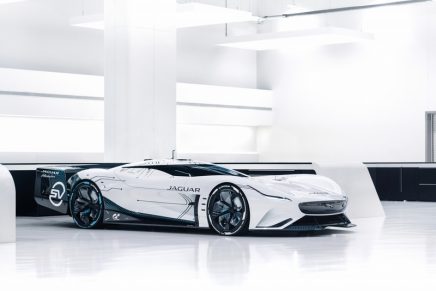