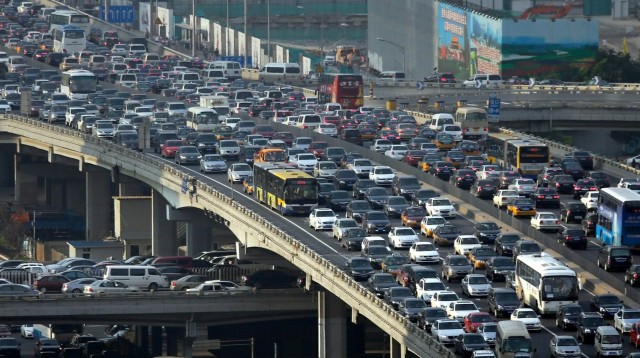 This article titled “How China’s action on air pollution is slowing its carbon emissions” was written by Jennifer Duggan, for theguardian.com on Thursday 21st November 2013 16.50 UTC

It’s been a week of mostly bad news for the planet but there may be a small glimmer of hope as new research shows the growth of emissions from China, the world’s biggest emitter, may be slowing due to its efforts to clean up the air pollution problem in many of its cities.

The United Nations climate change talks in Warsaw are so far not making sufficient progress to ensure the agreed goal of keeping global temperature increases to below 2C and new research shows that global CO2 emissions from burning fossil fuels will rise to a record high of 36 billion tonnes in 2013. The research from the Global Carbon Budget also estimates that in 2012, China contributed 27% of global CO2 emissions.

However, the latest Climate Change Performance Index published by Germanwatch and Climate Action Network Europe suggests that China is taking action to clean up its act as it tries to deal with its hazardously high levels of air pollution.

“Recent developments indicate a slower growth of CO2 emissions and a decoupling of CO2 growth and GDP growth. Both, its heavy investments in renewable energies and a very critical debate on coal in the highest political circles, resulting from the heavy smog situation in many towns, give hope for a slower emission growth in the future.”

Air pollution is a big problem during the winter months as heating systems get switched on. While only the off the scale levels gets media attention, the reality is that many Chinese cities at this time of year experience levels of air pollution well above the levels considered as healthy by the World Health Organisation.

The Chinese government has been under pressure internally to take firm action on air pollution and in September introduced a plan to bring improvements in air quality in key areas by 2017. The measures planned include closing polluting factories, and improving fuel quality. But more importantly, the plan also aims to reduce the country’s reliance on coal.

At a time when any environmental issues including climate change are way down the political agenda for many countries due to economic concerns, in China the environment is top of the agenda as smog and water pollution are taking a toll on the health of its citizens.

In a recent blog post, Li Shuo, Climate and Energy Campaigner with Greenpeace said there is strong media and public perception that sees climate change and air pollution in the same vein.

And in a recent interview on this blog, one of China’s top environmentalists Ma Jun said: “In China most people don’t need to be convinced about climate change before they want to take action … Hundreds of millions of people are exposed to a bad pollution problem and they do want to solve this problem.”

China has also experienced a number of extreme weather events in recent years and this week at the United Nations climate change negotiations, the government released its National Strategy of Climate Change adaptation.

According to the report, extreme weather conditions in China has caused an average of more than 2,000 deaths and up to 34bn pounds in economic losses each year since the 1990’s. Xie Zhenhua, China’s top climate negotiator said that China has pledged to cut its carbon intensity by 40-45% by 2020 from 2005 levels.

However any optimism must also be tempered by the fact that China’s position in the Climate Change Performance Index is still ranked as poor. Global emissions are still rising and the first three positions of the Index remain empty as no country is considered to be on track to prevent dangerous climate change.

The UN climate negotiations are once again at a standstill. China’s stance at the international level remains the same, that developed countries are more responsible for climate change due to their historical emissions and they should pay for the damage caused while developed countries want current and future emissions to be included in any new climate change agreement.

But there at least domestically perhaps China’s actions can bring some international benefits and Xie said during the talks that China’s climate change policy is not determined by “international pressure” but from “the inherent requirement of China’s sustainable development”.