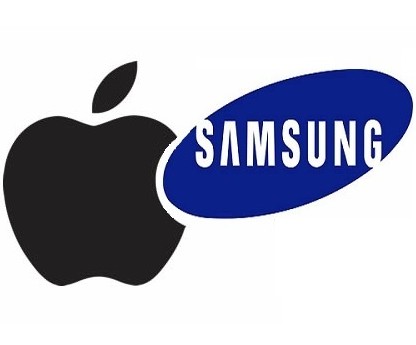 This article titled “Samsung ordered to pay Apple 0m more for US patent infringements” was written by Dominic Rushe in New York, for theguardian.com on Thursday 21st November 2013 21.57 UTC

The retrial verdict came after judge Lucy Koh vacated over 0m of the original bn damages the jury awarded Apple in March, saying the jurors had miscalculated. The new jury sided heavily with Apple, which argued it was owed another 9m. Samsung argued it owed just m and that Apple had inflated the worth of its patents.

Barring a successful appeal, the Korean maker of Galaxy smartphones and tablets owes more than 0m in damages, including the award from the original verdict as well.

The verdict came on the third day of deliberations for the eight-member jury. On Wednesday, they asked the judge for calculators and highlighter pens to help determine how much Samsung owes for copying key features in 13 of its own phones and tablets sold in the US.

On Thursday, they ordered Thai food from San Jose’s House of Siam and asked for a copy of the courtroom sketch made of them before delivering their verdict at 1:30pm local time.

The verdict is a blow for Samsung, which is locked in legal skirmishes with Apple in courtrooms across the world.

Bruce Abramson, a registered patent attorney at Rimon PC in New York, said the two tech giants dominated the field and owned so many patents between them that there was no end to their battle in sight.

“It seems unlikely that either will force the other out of a major market at this stage,” he said. “They’ll go at it until someone calls a truce, or someone else comes along with some new technology and pulls the plug on them.”

Samsung made two attempts this week to halt the trial. On Tuesday, it called for a mistrial after Apple lawyer Harold McElhinny told the jury that the US TV manufacturing business had died because businesses didn’t adequately protect their intellectual property from foreign companies.

“Our economy will disappear,” McElhinny told the court in the heart of Silicon Valley. “If the cost of breaking the law is a small fine … Samsung’s copying will have proven successful.”

Samsung called the comments racist. Judge Koh denied the stay but instructed the jury to ignore where the companies are based, or their race, in their deliberations.

On Wednesday, Samsung filed for an emergency stay after the US Patent and Trademark Office said an Apple patent important to the damages case might not be valid. Koh has not ruled on the motion to stay. Apple argued against the motion to stay, saying it crossed “the bounds of reason” and would cause require a retrial of the retrial.

The verdict is the latest in a series between the two electronics giants, which have tried to get their rival’s goods banned in Europe, Australia and Asia, as well as in the US.

Judge Koh vacated part of the previous jury’s damages award after determining they had miscalculated the amounts owing for 13 of the 26 products in the original trial.

Another, potentially bigger trial, between the two sides is scheduled for March 2014, when Apple will argue that Samsung’s existing products infringe its patents.

“As they jockey for position, it defines the territory for other people. It says to other people: ‘Don’t even think about it’. If you’re thinking about getting into this market, we’re going to hit you hard coming out of the gate.”