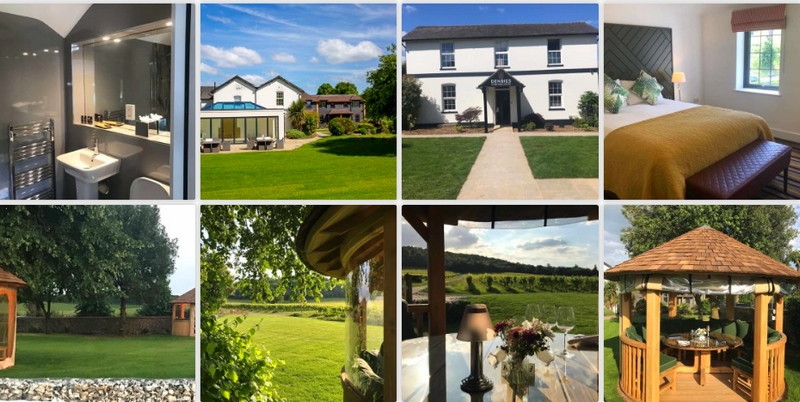 It’s an early autumn afternoon and I’m standing at the top of a vineyard. Below me is a sea of greens and golds, acres of vines heavy with ripened grapes – the harvest is well under way. The sky is azure, clouds scud over and butterflies flutter past. It could be the Loire, or even Sonoma, but in fact I’m just outside Dorking, in commuter belt Surrey, just 40 minutes from London Waterloo.

My trek up the hillside is part of Denbies Secret Vineyard Trail, an escorted tour round parts of the 265-acre estate that are not normally open to the public, punctuated, if this sounds too much like hard work, by tasters of cheese and honey, and glasses of wine.

The estate was established in 1984 when a local entrepreneur, Adrian (now Sir Adrian) White, took over a former pig farm and planted it with vines on the advice of his neighbour Professor Richard Selling, a geologist who recognised that the soils were similar to those in France’s Champagne region. It was an extraordinarily far-sighted project for a time when English wine was regarded as a bit of a joke.

Things are very different these days: an exceptional 2018 harvest saw England and Wales produce 15.6 million bottles, compared with only 4.15 million in 2016. Planting has also taken off, nearly doubling in the past five years from 1,884 hectares (4,665 acres) in 2013 to 3,778 hectares in 2018. Even the French have got involved, with champagne house Taittinger buying vineyards in Kent, and Pommery collaborating with Hattingley Valley in Hampshire.

Denbies, like the rest of the UK wine industry in the early days, used to be known for rather weedy medium-dry whites made from grape varieties such as seyval blanc and müller thurgau.

Now, half the production is sparkling wine and the rest is dominated by the popular sauvignon-blanc-like bacchus, ortega (which is often used for sweet wines) and even some red varieties. Denbies has actually planted syrah (shiraz to the new world) in its experimental vineyard, which sounds hopeful, even as global temperatures surge.

It’s already well set-up for tourism, too, with a vast visitor centre and a slightly Disney-esque train trundling through the vineyards. But this summer, it added a hotel which proudly claims to be the first English winery hotel. (There is already one at Llanerch in Wales, whose former chef, Michael Hudson, it has lured to Surrey to oversee the new restaurant.) The accommodation is functional rather than flash – with its somewhat spartan corridors it feels a bit like a posh Premier Inn – but the views over the vineyards and the hum of a tractor in the background give it a bucolic vibe.

The south-east of England is home to three-quarters of the UK’s wineries. There’s a handful of urban wineries in and around London, including Blackbook in Battersea, and one near Bristol, Limeburn Hill, but most English wine comes from Sussex, Kent and Hampshire.

Wine has become a lucrative second career for former financiers such as Ian Kellett of Hambledon Vineyard in Hampshire and hedge fund manager Mark Driver of Rathfinny near Alfriston in Sussex, which boasts an upmarket B&B, The Flint Barns. Guardian readers may not be quite so keen on patronising the glamourous new facilities at Gusbourne in Kent, which is owned by Tory donor and Leave supporter Lord Ashcroft, but it and nearby Hush Heath winery – which also has a lavishly decked new visitor centre – are part of Kent’s new Wine Garden of England trail.

Denbies, too, is continuing to innovate. While the estate isn’t organic (the British weather makes this too tricky, they say – and it did chuck it down the morning after my vineyard walk), it puts great emphasis on sustainability, is moving away from plastics, and installing solar panels on the roof and electric car charging points outside the hotel.

In a pair of circular, tiled cabanas on the “infinity lawn”, with views down to the vineyard beyond, parties of up to 10 can enjoy a food and wine matching exercise with the Denbies range £45pp plus £100 for a wine expert to talk you through it). The pairings are enjoyably whacky. I’m impressed by the combination of local Chalk Hill Bakery bread and Marmite butter with Denbies’ Cubitt Blanc de Noirs sparkling wine (Marmite and bubbly – who knew?) and am amazed to try its Brokes botrytised sweet wine with vanilla pannacotta and caramelised apricots. It’s a bit of a treat given that only 100 bottles are made each year, which presumably accounts for the £60 price tag. Surrey’s answer to Chateau d’Yquem, maybe?

As we sip and munch, cyclists and joggers speed past. To foster goodwill locally, the grounds, with seven miles of public footpaths, are open to the public. After asking for feedback from residents, the winery changed the colour of the train that runs through the estate from blue to a more subtle green that blends into the trees. A local group organises a park run every Saturday morning which attracts some 350 runners. Seasonal events such as a Santa fun run and Easter Bunny Hop run pull in even more.

But maybe the biggest draw is that it’s within easy walking distance of Dorking station, which is probably just as well after all that “tasting”. And all the more reason for going into the hotel business.

• Accommodation was provided by Denbies Vineyard Hotel (doubles from £135 B&B). The Secret Vineyard Trail runs throughout the autumn in fine weather, from £25pp (check website and social media for dates). The food and wine matching experience is available to hotel residents only, booking essential