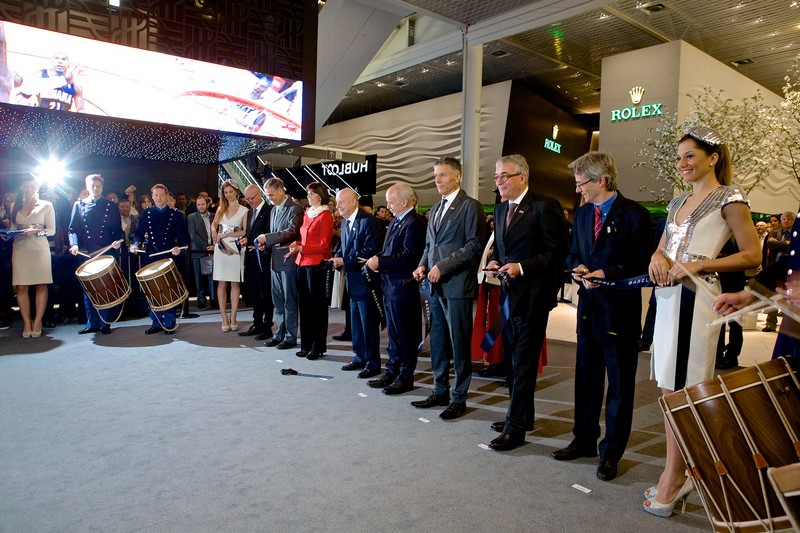 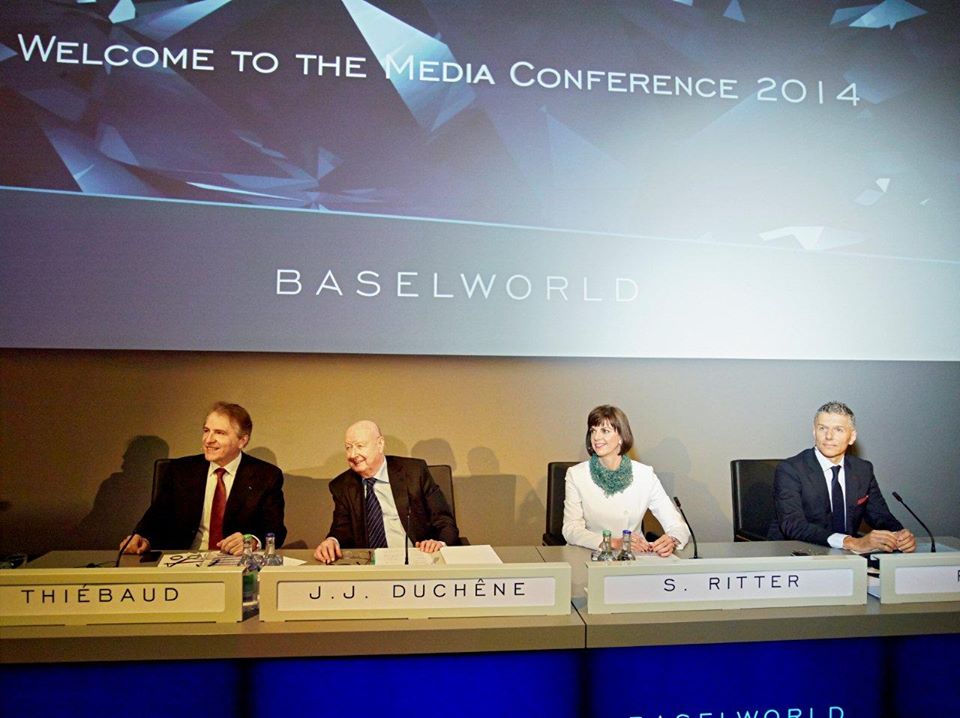 The commitment to innovation and precision, combined with unbridled passion has given rise to a real city within Messe Basel in Switzerland. This year’s Baselworld is featuring the most beautiful and best watch and jewelry products of the industry.

Around 100,000 visitors and over 3,500 journalists from all over the world are expected to attend this year’s event. This year, just like every other year, there are many highlights at Baselworld. With their luxurious and sometimes spectacular presentations, the 1,400 exhibitors will ensure that their pavilions showcase highlights every day, almost round the clock. Baselworld 2014, which is also open to the general public, runs from 27 March to 3 April 2014.

Baselworld is in turn expecting a trend towards lifestyle at its 2014 show. Over the last decade, watch and jewellery brands have become an important barometer for the lifestyle sector. Even fashion designers, industry designers and marketing experts from a highly diverse range of industries are increasingly finding inspiration at this superlative event. The pavilions and presentations are often designed and staged by world-famous architects. Celebrities from all over the world stroll through the exhibition’s over 30 kilometres of extensive walkways. As for what makes Baselworld so appealing, Sylvie Ritter, its Managing Director, summed it up by saying: “We have an outstanding product with the world’s most prominent brands under one roof.”

“The tradeshow is a microcosm of the industry and a reflection of the market. All of the leading players in the watch and jewellery industry come together here. Visitors can find out about the latest changes, trends and innovations within the space of a week,” said Sylvie Ritter, managing director of Baselworld.

With exports worth 22 billion Swiss francs, the watch industry forms the backbone of the Swiss economy. Francois Thiebaud, president of the Swiss Exhibitors’ Committee, is optimistic about 2014: “During the first two months of the year, exports rose by 6,8 percent compared to the same period of last year. This is significantly higher than, the growth of 1,9 percent in 2013.”

Here are some of 2014 exclusive new products unveiled at the opening of this year’s Baselworld: 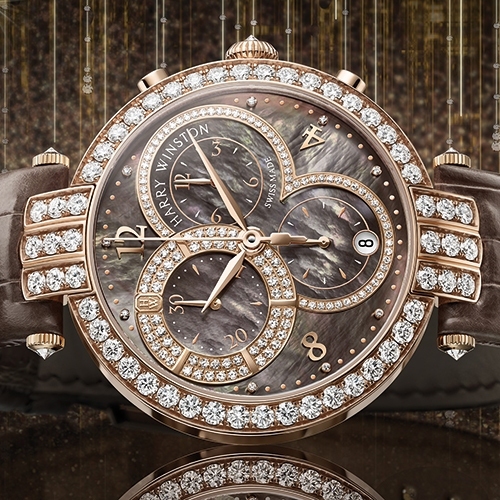 Derived from the first collection, launched in 1989, this timepiece features a slimmer case in pink gold with reworked attachments whose signature form alludes to the arches of Harry Winston’s flagship Salon on New York’s Fifth Avenue. Forging even stronger ties with the company’s heritage, generous diamonds, made all the more magnificent by a delicate setting, illuminate the wrist with their radiance and purity. The elegant Tahitian mother-of-pearl dial introduces a
touch of brown with smoked accents. An exquisite crown brings the final, perfect detail that sets the seal on this timepiece’s jewellery legacy.

HERMES Dressage L’heure masquée watch
The hour hand remains hidden beneath the constantly moving minute hand, solely deigning to appear at a deliberate press on a crown-integrated pushbutton. This fleeting apparition captures exclusively the moment in hand and vanishes as soon as the pressure is released – as too does the second time zone window display. Issued in gold or steel limited series of 500 and 1,000 respectively, this playful stage-setting is orchestrated by the ingenious interaction of the rack, pinion and gear trains. The hour cam releases from its hiding place the hand that dutifully appears to perform its role of pointing to the correct hour on the dial. The second time zone indication is directly driven by the base movement and adjustable via the pushbutton opposite the crown. In this entirely Manufacture-made composition, self-winding calibre H1925 is equipped with an exclusive patented module enabling it to play this uniquely personal musical score. 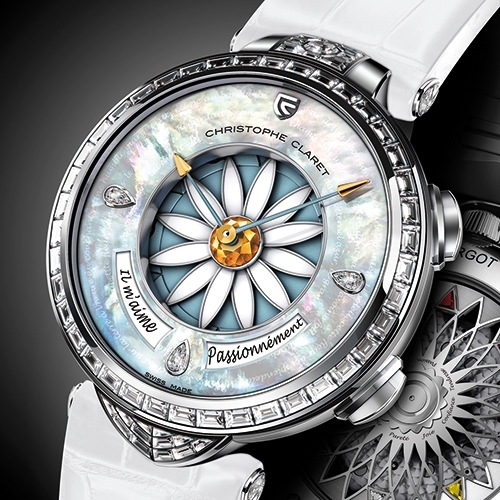 CHRISTOPHE CLARET MARGOT watch – He loves me, he loves me not…
Every woman has one day plucked the petals from a daisy to know whether her one and only shares her feelings. Christophe Claret recreates this delightful distraction in a unique and patented complication that will steal women’s hearts: a world first! A push at 2 o’clock and the watch springs to life, as though abandoned to nature’s whims, by hiding one petal, sometimes two, impossible to say. The all-important verdict is then delivered, inscribed on a retrograde disc at 4 o’clock. Each time the pusher is depressed, a crystal-clear note rings out. A corrector at 4 o’clock has all the petals instantly reappear; at the same time, three dots show themselves in an aperture. Turning the watch over reveals another game: the colour of feelings. When the daisy spins to a halt, one of 8 different coloured gems appears opposite the heart to symbolise the sentiment with which it is associated. 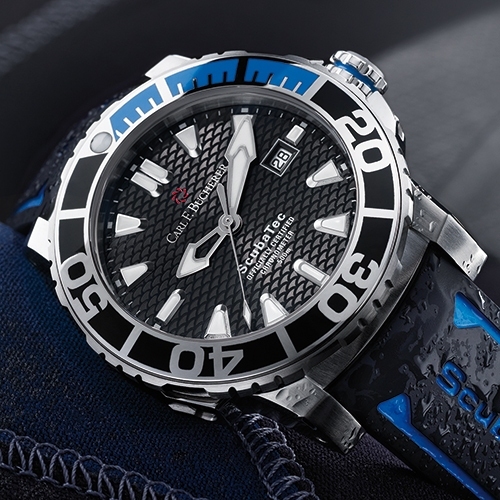 CARL F. BUCHERER Patravi ScubaTec watch – an impressive dive watch that puts all its assets to work above and below water.
Inside beats the automatic CFB 1950.1 calibre whose precision and reliability have been certified by the COSC. To ensure dive times are accurately measured for complete security, the bezel will only rotate counter-clockwise, thereby ensuring the diver’s safety should the bezel be accidentally knocked. Hands and hour-markers are coated in Super- LumiNova which glows blue in the dark for underwater legibility. A helium valve releases pressure inside the case to protect against damage when resurfacing. Stylish and sporty, the Patravi ScubaTec is the ideal dive buddy. 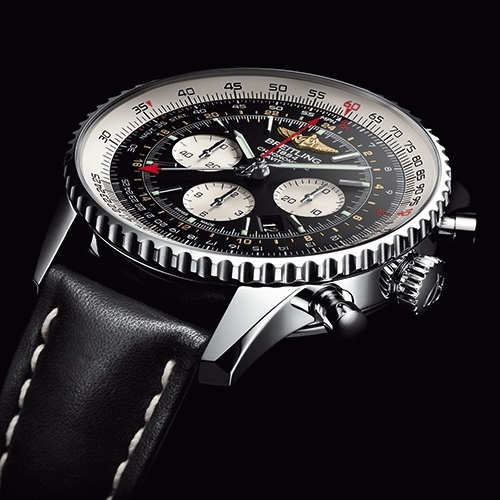 BREITLING Navitimer GMT watch – for aviation professionals
In 1952, Breitling created the Navitimer watch, a “wrist instrument” specifically designed for pilots and other aviation professionals. Equipped with a circular slide rule, this chronograph soon became a cult object among passionate aeronautical enthusiasts. A loyal companion to airborne adventurers, it has always had the world as its horizon. The new Navitimer GMT confirms this vocation and thinks big with an imposing 48 mm case. The ingenious Manufacture Breitling Calibre B04 visible through the sapphire caseback powers an exceptionally functional dual timezone system: simply pulling the crown out and turning it backwards or forwards in one-hour increments is enough to adjust the watch to the hour and date of the travel timezone, while maintaining home time in 24-hour mode and losing no precision in terms of the minutes. 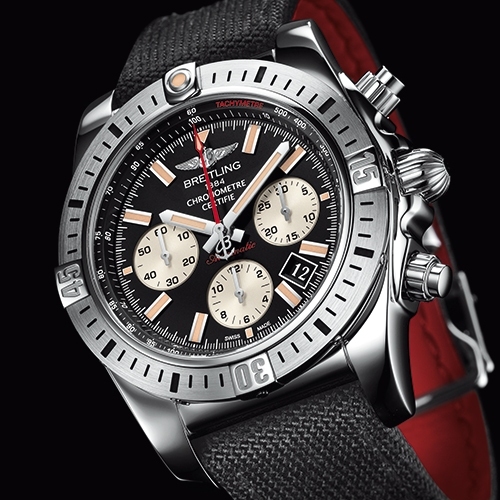 BREITLING Chronomat 44 Airborne watch – celebrating the 30 years of light of BREITLING famous Chronomat.
To celebrate the 30 years of light of its famous Chronomat, initially developed for the Frecce Tricolori, the Italian airforce aerobatics team, Breitling launches a special series reviving the design and the spirit of the original chronograph. This technical and sophisticated professional instrument features a rotating bezel equipped with four raised rider tabs serving to count off flight times, while facilitating rotation even with gloved hands. The back of the case is engraved with the inscription “Edition Spéciale 30e Anniversaire” as well as the silhouette of an Aermacchi, one of the ten planes flown by the Italian squadron. To orchestrate this new chapter in the history of pilot’s chronographs is Manufacture Breitling Caliber 01, an automatic movement chronometer-certified by the COSC, is fitted aboard the Chronomat 44 Airborne 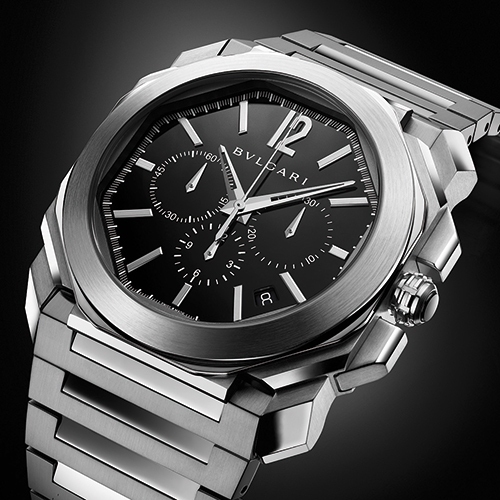 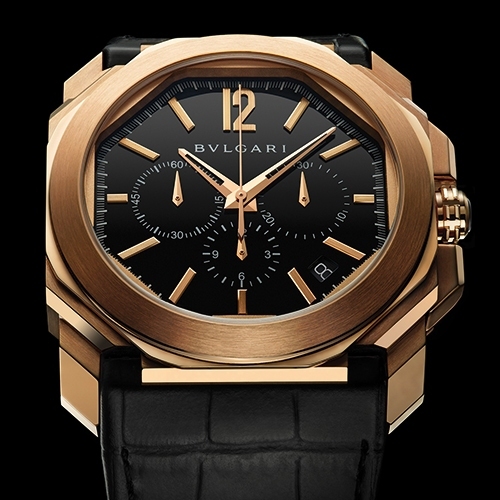 BULGARI Octo Velocissimo watch – a sophisticated creation with a technical vocation
This precious object distinguished by a blend of complexity and power is driven by an ‘engine’ worthy of its ‘bodywork’: the Velocissimo calibre, an integrated column-wheel chronograph movement with a silicon escapement, beating at the high frequency of 36,000 vib/h and dedicated to achieving exceptional precision

PATEK PHILIPPE Nautilus Travel Time Chronograph Réf. 5990/1A-001 – PATEK PHILIPPE’s first timepiece to combine a dual time zone with a chronograph.
Patek Philippe presents its first timepiece to combine a dual time zone with a chronograph. These eminently useful functions are showcased together in the new Nautilus Travel Time Chronograph. Local time is set forwards or backwards in one-hour increments by means of two pushers. Their seamless integration into the side of the case at 9 o’clock conserves the iconic design of the Nautilus, launched in 1976 and inspired by the shape of a porthole. As for the chronograph pushers, they are positioned next to the crown. The dial is distinguished by a dual day/night indication, one for each time zone, a date hand at 12 o’clock, and a 60-minute totaliser at 6 o’clock, ensuring at-a-glance legibility. This original combination of six complications was made possible by the development of a new automatic movement which is visible through the sapphire crystal back. 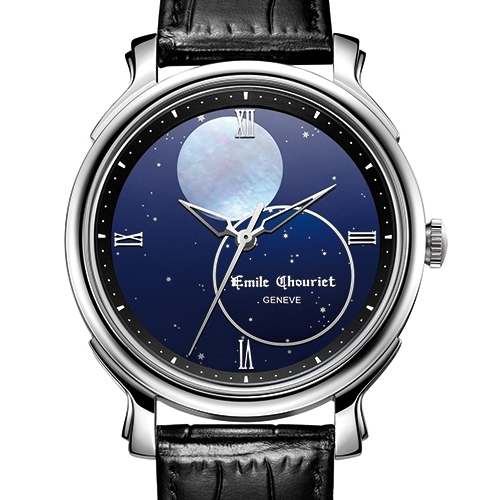 EMILE CHOURIET Moonphase watch – follow the moon in its fascinating trajector
Against a deep blue sky encrusted with shimmering stars, the moon, decked out in mother-of-pearl, reveals its different phases as it rotates around the dial. The Geneva firm’s master-watchmakers worked in concert, combining their expertise to bring this exclusive complication to life. After patient research, both technical and aesthetic, this stunning composition could finally weave its magic. 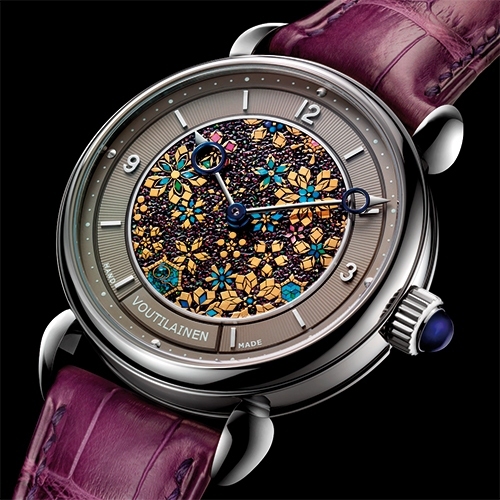 VOUTILAINEN 28 Oukamon watch – the symbol of harmony between Oriental and Western traditions.
The prestigious Unryuan studio in Japan produces exquisite works in lacquer, thus perpetuating an art that has travelled through the ages to inscribe itself in the present. The studio is fiercely determined to keep alive the soul, spirit and identity of Japanese culture as expressed in the Edo period. Now a perfect union is formed between this ancestral art of Japanese lacquer and Swiss fine watchmaking in a unique creation, 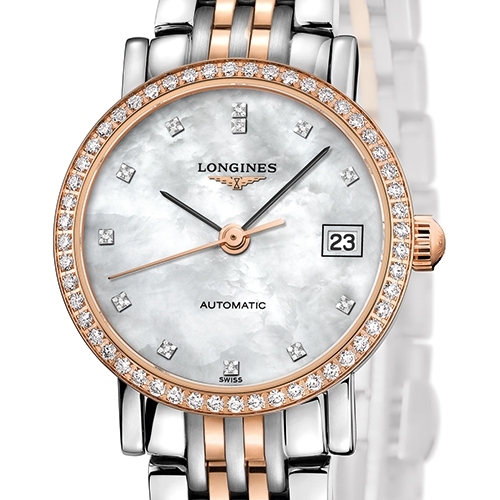 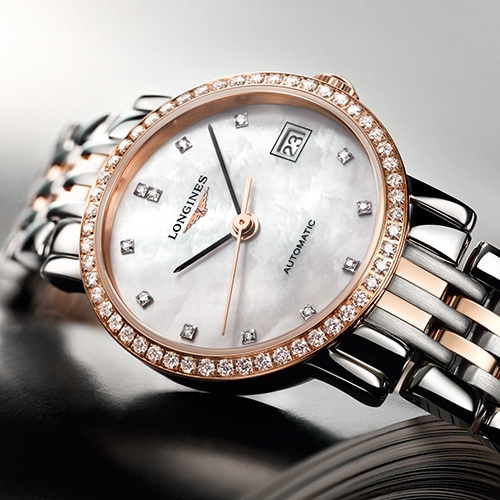 LONGINES The Longines Elegant Collection – “Elegance is an attitude”
A refined case in steel or two-tone steel topped with pink gold, set or non-set provides a delightfully well-rounded frame for this watch available in three sizes. Each of the watches expresses its own vision of elegance through various dial executions, with or without diamonds. At their heart beats a mechanical automatic movement recalling Longines’ watchmaking tradition. A bracelet composed of slender links sets the perfect finishing touch.

MCT Sequential Two – S200 watch – reading of time via a sequential display.
MCT’s emblematic prism-style hour display appears for the first time within a round case. The perfectly made case of the new Sequential Two reveals all the brand’s signature design features, including the famous sapphire ring on the caseband as well as the innovative hour display for which it has become known. The entirely in-house developed new automatic movement orchestrates the fascinating reading of time via a sequential display that has established MCT
firmly within the circles of contemporary Haute Horlogerie. The hours are indicated by four generous blocks, each composed of five triangular prisms. The hour in progress appears in a remarkably readable manner through an open ‘window’, while the others are hidden by a segment turning counter-clockwise every 60 minutes. Setting the ultimate touch to this fascinating composition with its uncompromising design, the minutes appear around the entire 360° dial perimeter.