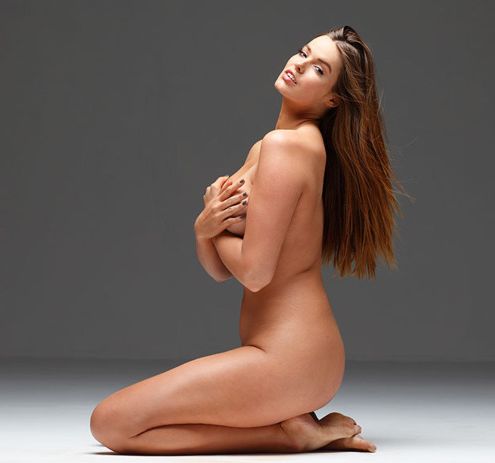 This article titled “Robyn Lawley: the world’s most refreshing supermodel?” was written by Sali Hughes, for The Guardian on Saturday 24th August 2013 08.00 UTC

Robyn Lawley is the supermodel you’ve never heard of. Last year she was the face of Ralph Lauren; the year before she appeared on the cover of Italian Vogue. She has her own fashion range, a book deal, and presents cookery shows in her native Australia. But you probably don’t recognise Lawley because she is not, to use the industry term, a “straight model”. As a UK size 16, Lawley counts as “plus sized”.

“I tried to be a straight model for a while,” Lawley says when we meet in London. (She lives in New York; America has the biggest plus-sized market.) “But I’d arrive at castings, aged 19, and it would be immediately obvious that I was much bigger than the other girls and wasn’t going to get the job.” Like many aspiring models, she managed to battle her way down to a size 6-8 (a dubious goal for someone who is 6ft 2in), but found maintaining this weight a miserable and ultimately futile endeavour. One day, an art director recommended an agency specialising in larger models (in the fashion industry, this means anything over a size 10), and “they believed in me straight away.”

The irony is that Lawley is closer in size to the average woman than current mega model Cara Delevingne. This perpetual dishonesty within the fashion industry frustrates her. “I feel terrible for the size 22s, 24s, who never see a woman in the public eye who represents their size, or modelling the clothes they’re being asked to buy. I hate it, but I have to remind myself that this is a start. I’m helping in a small way to move things on.”

In June 2011, Lawley, Tara Lynn and Candice Huffine became the first plus-sized models to appear on the cover of Vogue. Shot by Steven Meisel for the Italian edition, they wore designer lingerie and ,000 Gucci and Dior dresses that “had to be cut up on the day because none of them fitted us”. (The fact that curvier models are always depicted as either hyper-feminine and sexy, or safe and mumsy – rarely cool or edgy – is a source of some irritation to Lawley, who wears sharp, mannish clothes when off-duty.) She was thrilled to take part, but says the shoot was stressful. “No one there had ever worked with anyone even close to our size before. No one knew what to do with us.” That cover proved something of a one-off statement, rather than the dawning of a new editorial direction – though Lawley reports that this year, she has been booked by more straight-sized fashion clients than ever.

As a young model, she was driven less by a desire for equality, more by an inherent work ethic and a need to escape the geographical isolation of Australia. “I love my country, but I come from a suburb that’s nowhere special in western Sydney.” Her father is a fireman; her mother helps out at a centre for disabled people. “I’ve always worked, from the age of 13, because I was desperate to earn my own money. Seeing how little my dad was paid for what is a hero’s job made me want more from life. My parents encouraged that, totally.” She finished high school and went to live in France, without a word of French under her belt. Seduced by the cuisine, she gained “loads of weight” fast.

Despite her healthy and unarguably gorgeous body, Lawley finds the “real women have curves” brigade patronising and unhelpful. “People use me as a figurehead, and to me that misses the point and is blatantly offensive to thin women – my sister, for one. Curves don’t epitomise a woman. Saying, ‘Skinny is ugly’ should be no more acceptable than saying fat is. I find all this stuff a very controlling and effective way of making women obsess over their weight, instead of exploiting their more important attributes, such as intellect, strength and power. We could be getting angry about unequal pay and unequal opportunities, but we’re too busy being told we’re not thin enough or curvy enough. We’re holding ourselves back.”

The issue is not that models are too thin, she says: the problem is one of variety. “Look at fashion shows. We need a range of ages and ethnicities. There are just very thin, white, 16-year-old girls on the catwalk and that has to change.” In a very literal demonstration of the higher value society puts on slim women, Lawley has often discovered that she is earning much less than the “straight-sized” girl on the same job. “There’s a sense of, ‘Oh, she won’t expect as much money.’ I am not accepting that.”

Lawley is very aware of the ephemeral nature of modelling, and already has her eye on a career in photography if the work dries up; she has been shooting her modelling friends almost continuously for the past three months, learning “to shoot plus-sized girls in a cooler way”. She has also written a cookery book for Random House, based on her popular Tumblr account, robynlawleyeats, and designed her own swimwear range (size 12-24 and soon to go bigger) because she found it “impossible to find nice stuff to fit”. She tells me that earlier on today, she went to Topshop in London and saw “very few straight model shapes” among the young shoppers. She says these girls need to feel represented and normal.

“I’ve seen the magazines, the TV shows, the celebrity articles, the same as everyone else. I’m not immune just because I’m a model. And I know they have a devastating effect on young girls. Don’t use the words fat, skinny or diet. Tell your daughter constantly that you love her body the way it is.”