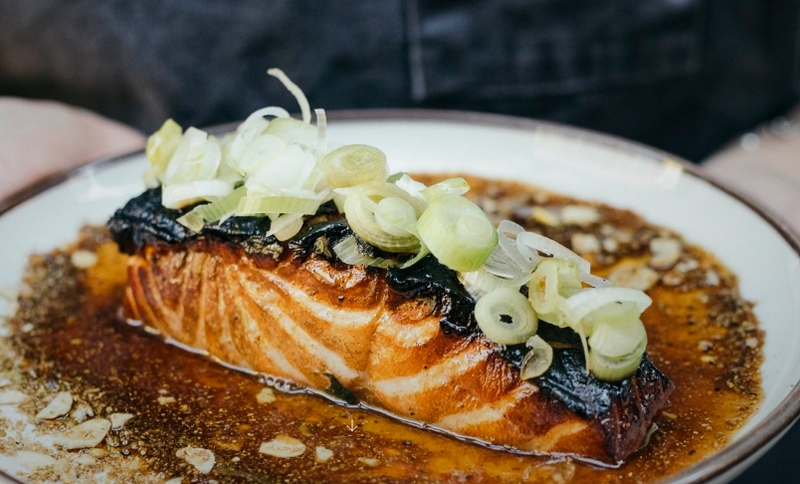 The Barbary, Covent Garden
Sit at the horseshoe counter, choose from a menu that spans the Levant, watch the chatty chefs cook over fire, and don’t miss the breads or puddings.
16 Neal’s Yard, WC2H 9DP; thebarbary.co.uk

Alchemilla, Nottingham
Choose from the five-, seven- or 10-course menus, with clever touches such as enhancing the ubiquitous cauliflower with the umami of roasted yeast.
192 Derby Rd, NG7 1NF; 0115 941 3515; alchemillarestaurant.uk

Carters of Moseley, Birmingham
“A little bit magical,” was how the Guardian’s Grace Dent described Brad Carter’s cooking in 2018. Menus start at £45 for four courses – a bargain for food this exciting.
2c Wake Green Rd, B13 9EZ; 0121 449 8885; cartersofmoseley.co.uk

Simpson’s, Birmingham
Casual elegance is the order of the day, in the décor and on the plate. An inventive approach in the kitchen to seasonal ingredients sees plaice, cabbage and chicken of the wood mushrooms given a luxe edge with a shellfish cream, and cherry beer turned into ice-cream.
20 Highfield Rd, B15 3DU; 0121 454 3434; simpsonsrestaurant.co.uk

The Black Swan, Oldstead
Winner of 2019’s Local Food Hero, Tommy Banks was the UK’s youngest Michelin star chef, and the acclaim has continued ever since. One tasting menu, with nine rooms available, should you wish to stay over.
Oldstead, YO61 4BL; 01347 868387; blackswanoldstead.co.uk

Tomahawk
This mini-chain is satisfying cities of the north-east with salt-aged beef, including Wagyu, and traditional steak-house sauces and sides.
Various locations; tomahawk-steakhouse.co.uk

The Small Holding, Cranbrook
Much of the produce used in the kitchen is grown on its own farm, so expect menus to not only move with the season but with what’s been lifted from the ground that morning.
Ranters Ln TN17 2SG; 01892 890105; thesmallholding.restaurant

Lata Lata, High Wycombe
This very new, crowdfunded casual restaurant is from the same owners as regular Cheap Eats runner-up the Tin Kitchen. The menu is based around small dishes such green almond soup with fino, or lamb shoulder with sorrel.
St Mary St, HP11 2HE; 07791 847214; latalata.co.uk

Wilson’s, Bristol
“The thing is it’s so gorgeously uncomplicated,” wrote our own Jay Rayner in his review of Wilson’s. Don’t mistake uncomplicated for a lack of skill or imagination – it’s here in abundance in the prettily composed plates of lobster, basil and redcurrants, or mackerel given the hasselback effect and served with poached oyster.
24 Chandos Rd, BS6 6PF; 0117 973 4157; wilsonsrestaurant.co.uk

Ballintaggart Farm, Grandtully, Perthshire
This new restaurant-hotel may be rural but it’s refined and bookings are essential for the “taste of the Highlands” menu featuring smoked wood pigeon with raspberry and walnuts, or roe deer carpaccio with wood sorrel.
Grandtully, PH9 0PX; 01887 447000; ballintaggart.com

Two Fat Ladies at the Buttery, Glasgow
If you weren’t sure where you were, the tartan-clad dining room will give it away, as will Scottish classics such as cullen skink, or west-coast scallops with haggis.
652 Argyle St, Glasgow G3 8UF; 0141 221 8188; twofatladiesrestaurant.com

Ox, Belfast
Highly regarded for its understated excellence. Ox, said Jay Rayner in 2013, “wants to celebrate the best ingredients on its doorstep, and do it with unstudied professionalism”.
1 Oxford St, BT1 3LA; 028 9031 4121; oxbelfast.com

James Street, Belfast
Local steaks and seafood from the grill are a focus, but customers also have plenty of love for the bistro classics such as terrines, chowder and risotto, and a “taste of the island” menu.
19 James St S, BT2 7GA; 028 9560 0700; jamesstandco.com

Hadskis, Belfast
A stylish room with a stylish menu of Irish produce with a Mediterranean twist, so at brunch smoked haddock comes with a fennel hash, and local lamb chops are served with minted cannellini beans.
33 Donegall St, Commercial Ct, BT1 2NB; 028 9032 5444; jamesstandco.com/hadskis