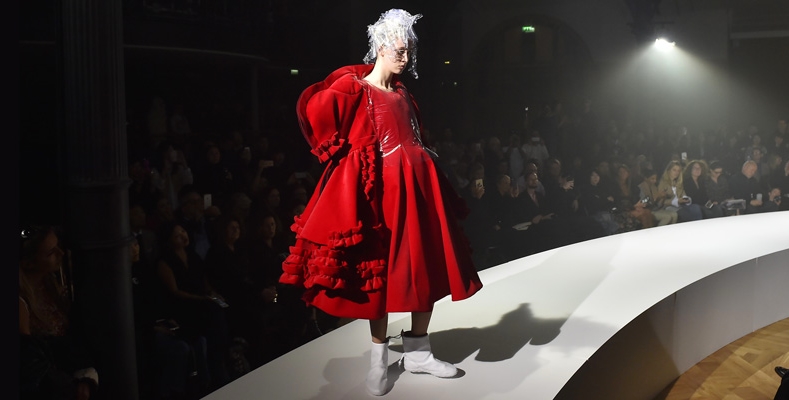 catwalk photography by Chris Moore – “Catwalking: Fashion through the Lens of Chris Moore” at Bowes Museum

Related: Catwalking: fashion through the lens of Chris Moore – in pictures

We may be more familiar with the subject of a fashion photograph, but this weekend it is the turn of one of the most prolific figures from behind the camera to take the spotlight. Chris Moore, the reigning king of catwalk photography, is staging his first ever exhibition at the Bowes Museum in County Durham from Saturday.

Catwalking: Fashion through the Lens of Chris Moore will document 60 years’ worth of images from the international collections that take place in New York, London, Milan and Paris, featuring over 200 original photographs hand-chosen by Moore from shows such as Chanel, Christian Dior, Alexander McQueen and Louis Vuitton. Far from comprising straight-forward catwalk images, Moore’s archive stretches back to the couture salons, before the ready-to-wear fashion show as we know it (with photographers huddled in their pack at the end of the catwalk on the plinth known as “the riser”) even existed. This makes for a photographic trip down the most stylish of memory lanes.

“In the early days [in the Sixties] it was just couture, which took place in salons,” explains Moore, who says he fell into fashion photography in his early 20s when his first wife, a fashion journalist, brought him along with her to document the collections. “We photographers would go from fashion house to fashion house, we would be offered one model to photograph, who was wearing a dress of their choosing, and we would have to pay the model about £4 to do so!”

Fast forward six decades and the landscape has changed. At 84, Moore mostly finds himself nestled in prime position among a 20-strong pack of photographers, all vying for the best shot. Now he provides his shots to international agencies, but over the years he has provided imagery to the Guardian, the Observer, Drapers, the Financial Times and the International Herald Tribune, among others. The pack, however, is a supportive bunch. When Moore was hospitalised after a bad fall at the Saint Laurent show in February, his counterparts got together and made sure he was supplied with a selection of the best photos from the show so he didn’t drop a ball. “It’s not as competitive as it looks,” he smiles.

The exhibition comes eight months after Moore’s book, Catwalking, was published by Lawrence King and inspired the retrospective. Alexander Fury, editor of Another Magazine, provided the words for the book and co-curated the exhibition.

“[Chris] started in 1968, the year after Yves Saint Laurent opened Rive Gauche and the modern idea of the fashion show as we know it was born,” says Fury, who together with Moore went through millions of slides and a digitised archive to curate the images included in the book and the exhibition. “What [he] brought to it was a a sense of reportage but also a certain level of refinement, like an editorial photographer capturing a model standing still, yet the big difference, of course, is that Chris couldn’t tell them what to do.”

The co-curators wanted the fashion in the images to “physically jump out of the images into three dimensions”, says Fury, and so 40 of the photographs will be shown side-by-side with the actual outfit they feature on loan from houses including Comme des Garçons, Vivienne Westwood, Prada, Jean Paul Gaultier and Versace. “I think a lot of the time with fashion exhibitions you see garments and they’re completely out of context of how they are originally presented, or they can be completely isolated. The unique thing about this is that it was very much about the original context with the physicality of the garments.”

The decision to show the exhibition outside the capital was a conscious one. Usually fashion exhibitions of this importance tend to be shown at the V&A in London, yet the fact it is in the north – near to wear Moore was born in Newcastle and north of where Fury grew up outside Manchester – is intended to make it more accessible and help inspire a new generation.

Moore says he is inspired by and “always learning” from the catwalks – and not just from the clothes. “Miu Miu had Depeche Mode, All I Ever Wanted as its soundtrack for autumn/winter 2014 and being the age I am, I didn’t know who they were, but it was the best song. I loved it! That was just great.”