Presented to guests at the Grand Palais Paris, Chanel Fall-Winter 2018/19 Haute Couture collection brings to life inspirations drawn from the sights and sounds of Paris. 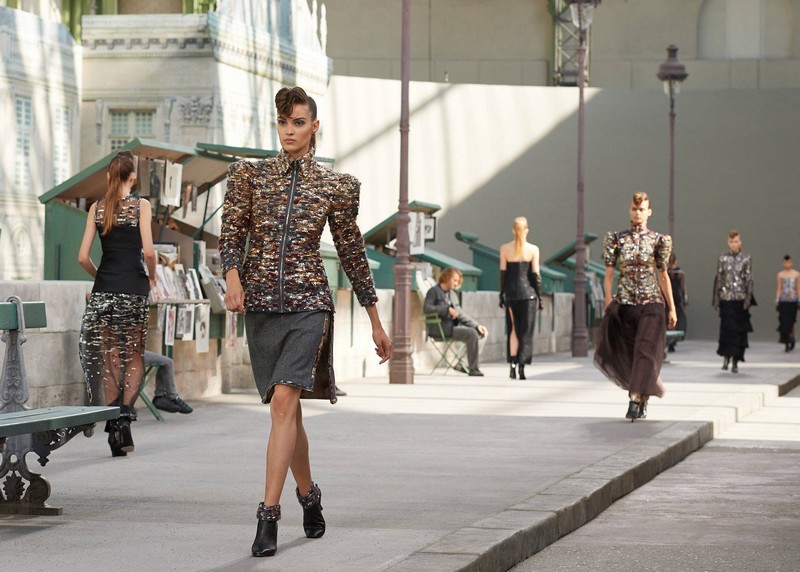 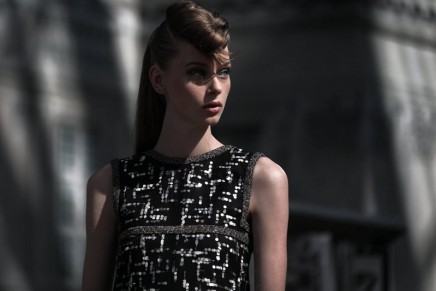 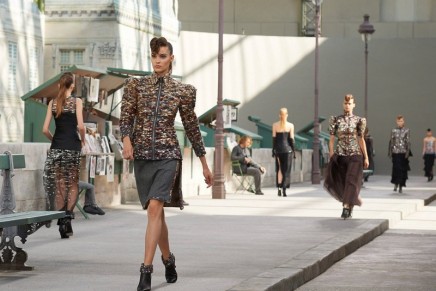 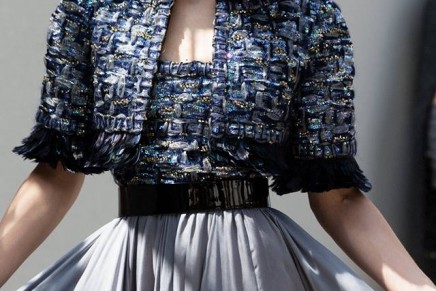 Of all the looks that appear at a Chanel haute couture show, it’s the wedding dress, the finale piece, which is under most scrutiny. Modelled by a Chanel muse, it is always ripe for unpacking – at January’s couture show, the Dutch model Luna Bijl wore a white feather tux, a timely suggestion that femininity now wore the trousers. This season, the model was Adut Akech, the Sudanese-Australian emigrée and current fashion darling. This time, the bride got married in a copper-green skirt suit.

For the show, the creative director, Karl Lagerfeld, still sporting a beard, transformed his customary location – the Grand Palais – into a similarly copper-green Parisian promenade by the Seine.

The catwalk was a pavement lined with book stalls and manned by various members of the photogenic Kroenig family, one of whom is Lagerfeld’s godson, all wearing covetable grey Chanel merch-style sweaters. Street lamps and benches dotted the set which was, perhaps, a riff on street style, although promenade-chic with air conditioning is perhaps more appropriate a term.

Slice through most of Chanel’s couture collections, and there is often something for the old guard and the new. Opening with the traditional tweed boucle skirt suits, models’ hair piled up into rockabilly rolls, the devil was in the detail. Slits were everywhere – thigh high on skirts, up fluted sleeves, and on necklines, all flashing pink and metallic linings. Evening gowns came next, with hemlines moving up, down and sideways. Skirts were puffball, tiered or long, occasionally sheer and chiffon.

The colours moved from staid greys to sugary blues and pinks and then back to black. As if to counter the heritage start, the final run of futuristic dresses were embellished with, if not made from, silver quilting. One giant silver coat which billowed in the wind-free hall, and was worn over a short black dress, was a viral image realised in silver quilting.

Most notable was a new twist on the skirt suit – micro-shorts peeking out from under a skirt – which managed to be both modern and modest. Likewise, sheer column dresses saw bodies covered in strategic places: necks were covered with sparkling polo necks or popped collar jackets, and little cropped jackets in metallic boucle worn over the final gowns all added to the demureness. The accessories were typically Parisian – long fingerless gloves in various matching shades, chiffon chokers and ankle boots in cream, black and various shades of glitter.

Compared with some of Chanel’s previous couture stagings – which have included a casino, a fairy-tale garden, an apocalyptic theatre and, last month, a cruise ship (for the cruise show) – it was relatively quaint, albeit designed with the atelier’s petites mains (the ambrosial term used to describe couture workers) meticulousness.

Seemingly impervious to downturn, Chanel recently made headlines for reaching $10bn (£7.6bn) in sales in 2017, putting it at the top among the world’s luxury houses, and surpassing many of its rivals. With figures like these, Lagerfeld can arguably make a green wedding outfit, grow a beard and recreate a mini street if he so chooses.

The green wedding suit appeared a particular surprise for Lily Allen, the singer and Chanel muse, who sat in the front row wearing a Chanel bow headpiece: “I was convinced the one before, the white one, was the wedding dress – and then along came the green one!” she laughed. Proof that fashion is most exciting when it breaks the rules rather than follows them.