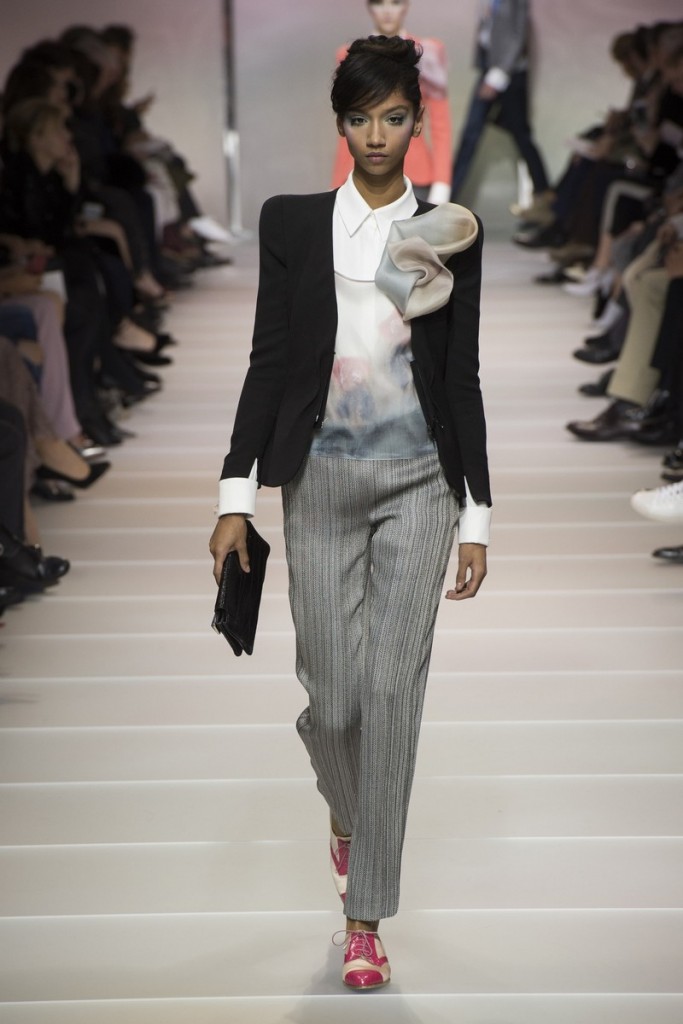 This article titled “Armani Privé celebrates the atelier in haute couture show” was written by Morwenna Ferrier in Paris, for theguardian.com on Tuesday 3rd July 2018 21.05 UTC

The loudest conversation at this run of Paris couture shows has concerned two matters: who is couture for and, more pressingly, how exactly is it made?

The first can probably be answered by looking at the front row: VIP clients with large chequebooks. But the second is more nuanced, and best answered by designer Giorgio Armani – who emerged from behind a curtain at his Privé show to retrieve a small black feather which had fallen from the cape of the 85th gown before taking his bow. A helpful reminder, then, that couture is made by hand.

Otherwise, things ran like clockwork. The Italian designer showed his collection within the gilt rooms of the Italian embassy on Tuesday evening. On thick parquet flooring, under two chandeliers so enormous the models came close to brushing their heads, Armani offered a primer on red carpet dressing. Privé – the exclusive collection that Giorgio Armani shows during Paris haute couture week – is a reliable indicator as to what we’ll see on the red carpet come awards season.

The collection was just shy of 100 looks and themed around a cocktail dinner, arriving in several acts, punctuated with colour and a short pause backstage between acts.

Things began simply: classic jacquard and velvet suits followed by playful takes on the tuxedo shape came in black and champagne – incidentally the colour of the font on the invitation, a colour scheme which bookended the show. There was even a waistcoat, albeit one more elegant and slick than Gareth Southgate’s.

Then came the gowns, designed, read the notes, “to reveal the refined meticulous work of the atelier”. In short, this meant gowns made from hundreds of metres of tulle; voluminous skirts made of feathers; a headpiece made from a cloud of chiffon, and an ultra-tight velvet jumpsuit with one cream arm which made a rushing noise as it passed.

The Armani colours were fantastical and sweet-like, pairing fuchsia with sapphire, turquoise and jade. Occasionally crystals and sequins decorated a look. Those on the fence of high glamour could go for a harlequin jacket but otherwise colour-wise looks were monochrome or bright – one or the other.

The styling tics were more accessible. If Privé is anything to go by, large dangling earrings in pops of colour which clash with your outfit are a safe bet on your night out next season. Costume jewellery and pearls are another go-to. And the hair tuck is the key way to show off your danglers.

If this collection goes some way to dictate the mood at the Emmys (which take place in September) then the top line is split neatly in two: minimalism and maximalism. Suits or froufrou. Even the shoes sit in two camps – “sporty moccasins”, Armani’s words, and others heels of a soaring height, both of which were worn with gowns.

Business is booming, says Armani, who reported strong demand for his Armani Privé collection. “Our targets have been reached, and this result shows a constant trend,” the Italian designer said recently, adding that his eye was on “the Chinese audience”.

Given the state of gender power politics, who knows what will happen on the red carpet. But Armani’s message is simple – go loud or go home.