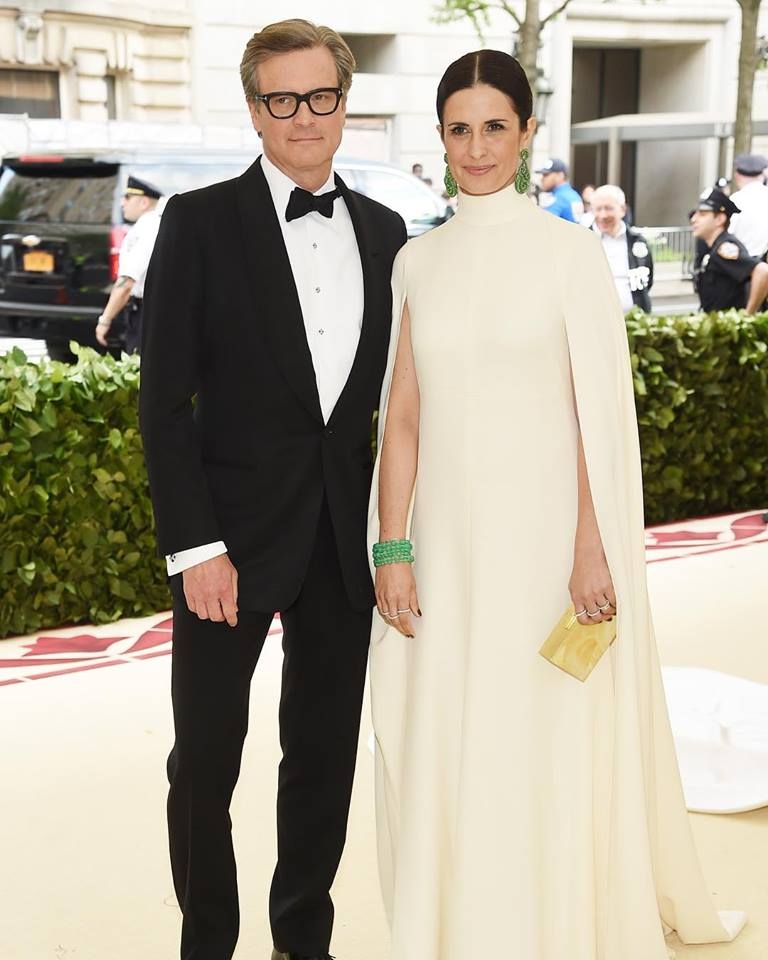 Colin Firth and liviafirth at the 2018MetGala; photo: Facebook ecoage

This article titled “Livia Firth: It’s not realistic to think we’re going to be in a world without leather or wool” was written by Alexandra Spring, for theguardian.com on Sunday 6th May 2018 18.00 UTC

Livia Firth still has the wool sweaters she wore as a teenager. The environmental fashion campaigner, who grew up in Italy, remembers hand washing her sweaters each summer, carefully storing them away, then unpacking them the following winter. She would wear them year after year so she had to look after them. This was before fast, disposable fashion she says, “We did it a different way.”

These days, as the founder of Eco-Age, a brand consultancy firm that works with luxury fashion labels on improving their sustainability credentials, and as someone who makes frequent appearances on the red carpet alongside her Oscar-winning husband actor Colin Firth, she has an expanded wardrobe – yet it’s probably not as big as you may imagine. In 2010 Firth came up with the Green Carpet Challenge, using her visibility in front of the world’s media to wear only ethical, sustainable and repurposed fashion, and she’s often photographed repeatedly wearing the same gowns as part of her #30wears pledge.

She was a long way from Hollywood’s red carpets last year when she travelled to Tasmania to meet some of Australia’s top merino wool growers and learn about the production of wool. Each year she travels to a different country to learn more about the global supply chain. “You can never replace the real experience of meeting people and seeing things with your own eyes.” Recently she’s visited Bangladesh to meet the garment factory workers and Brazil to meet the leather farmers threatening the Amazon leather.

The trip to Tasmania was “facilitated” by Woolmark, the Australian company that promotes the use of merino wool around the world, and her experiences were captured in a short documentary Fashionscapes: Forever Tasmania

She says she didn’t know what to expect. “You have images of huge herds of sheep overgrazing and intensively reared and then we ended up in this landscape.” Tasmanian farmers like Matt and Vanessa Dunbabin of Bangor farm, who farm merino sheep, prime beef and prime lamb, and Roderic O’Connor, who runs the wool farm Connorville met with her, and she says she found their careful approach to land conservation and sustainable wool production inspiring

While she acknowledges that not all wool producers are as careful, she considers it important to highlight those who are doing it to demonstrate an alternative approach for others. “It’s not realistic to think we are going to be in the world without leather or wool or a world without cotton so what is the blueprint for doing it [better and] beautifully.”

The controversial practice of mulesing is a significant issue for the industry, with international wool buyers pushing farmers to phase it out, not least because of customer concerns. Firth asked the farmers about it, and on camera O’Connor says the industry is looking for solutions, through breeding and by using pain relief. For Firth it remains an ethical dilemma. “It’s not a nice practice but if it is done properly it saves the sheep’s life and a death from hell.”

The industry is also seen as having a significant environmental impact thanks to pesticide use, greenhouse gas emissions and, in some cases, overgrazing. The washing, dyeing and treatment of wool can also have an impact.

Yet the wool industry is pushing back, saying the life cycle assessment tools often used by the fashion industry don’t measure the full supply chain. Woolmark points out that wool is natural, renewable and biodegradable.

Firth was convinced, saying that wool comes out on top when compared to the evils of synthetic fibres, which shed microplastics each time they are washed and are not biodegradable. “If you throw away a wool sweater, it composes in the ground very quickly, and it doesn’t waste microfibres when you wash it.”

The day before our interview was the fifth anniversary of the Rana Plaza tragedy, when the collapse of the garment factories killed 1134 workers. Firth recently visited Bangladesh and she was disheartened to see how little has changed for the fast fashion industry. “There are new Bangladeshs every day,” she says. “Today all the big guys have just moved to Ethiopia to produce in a country where there is not even minimum wage so the story repeats itself in terms of the businesses and how they produce.”

But she is more optimistic about fashion consumers. She believes that as people learn about where their clothes come from and how they are made, their purchasing behaviours will change and the disposability of fashion will end. “Once you start to understand that there are women … in Dakar who produce [the clothes], if I buy something and I don’t care for it, I’m actually not respecting that woman.”