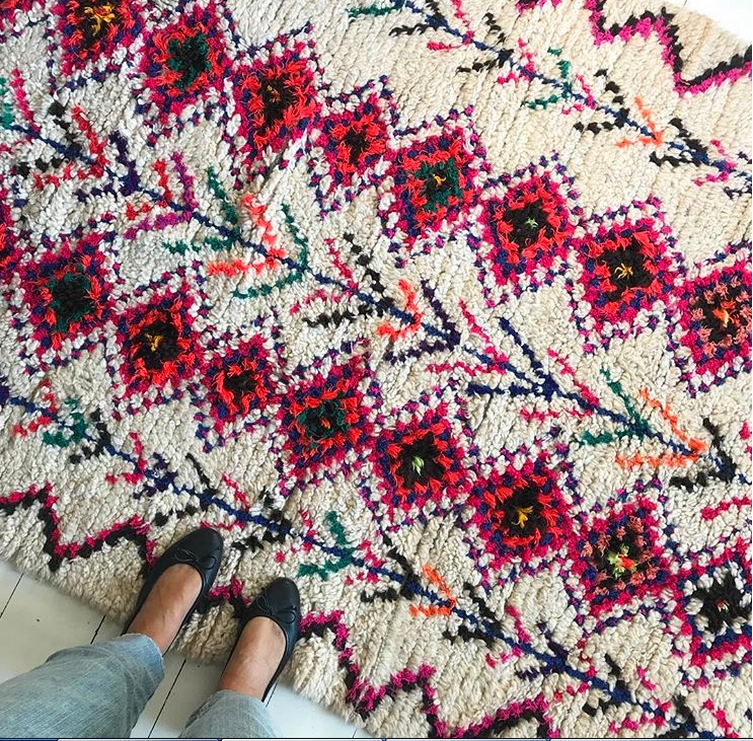 This article titled “‘If I can fit it in, I’ll add it’: mixing handmade with high-street” was written by Jo Craven, for The Observer on Saturday 24th November 2018 15.00 UTC

The framed watercolour swatches made by a paint salesman that cover the wall of Lisa Mehydene’s dining room are just the kind of canny £30 flea market buy that is her signature. As soon as she saw them, she knew they’d look great on the wall and from there so much of her interiors aesthetic extends.

A technicolour canvas unfolds on her dining table when she entertains: “I’m quite maximalist,” she says. “If I can fit it in, I’ll add it.” Hand-moulded plates, porcelain spoons, and a salvaged vintage linen runner and napkins are the backdrop to earthenware jugs of flowers. “Texture is so important to me,” she adds. Dark green Moroccan Tamegroute pottery from her online interiors business, edit58, sits next to brightly coloured plates made by vintage dressmaker Double J. Lighting is also key: “Candlelight always, never bright lighting as it is such a mood killer, but no scented candles near the food or the table.”

Though significant effort goes into setting the table, Mehydene likes entertaining to be informal: “We love to have friends over, but it’s never stuffy; it’s always platters of food that my husband Hil creates, and people pass it round and help themselves.” Family life means that Sunday lunch is a preference “so the kids can play while we talk, and it is more relaxing knowing you’re not paying for a babysitter you need to get home to.”

My grandmother was an antiques hunter. Even at 103, she would still go out sifting for things in flea markets

Throughout the rest of Lisa Mehydene’s home in Wimbledon the same attention to colour and scene-setting continues. Letters of the alphabet punctuate each room; a green wooden letter “A” on the gallery wall in her sitting room, a souvenir from her honeymoon to Argentina, is followed by the initials of her children’s names, or glass alphabet saucers by John Derian. Spotting the next letter starts to feel like an elaborate game of Scrabble.

Mehydene has lived in her three-storey Victorian semi-detached house with her husband and her twins, Milla and George, since 2014. It is the house they bought to return to after years of working abroad, latterly living in Singapore. They had left the UK a couple – Mehydene was a director in advertising, while her husband works in finance – and they returned with their twins, now six years old, along with Lisa’s accumulated collection of textiles, rugs and home wares sourced on their travels.

It was this hobby of collecting textiles, rugs and printed fabrics that seeded the idea for edit58. “I started the business because of rugs,” says Lisa. “I was so uninspired by the choices of either intimidatingly expensive rugs, or the high street and saw nothing at an in-between price point.” Tracking down rug makers led to building a network of relationships with artisans whose work she now sells on edit58. Her business is now three years old and the products on sale have expanded to incorporate papier-mâché animal heads from Portugal, wire baskets from France, splatterware ceramics and Berber fabric from Turkey, which she turns into cushions. Mehydene’s new project is a rattan lampshade collaboration with interiors stylist Matilda Goad, inspired by artisans she met while visiting Bali.

Mehydene believes her interest in creating interiors bursting with curiosities came from her grandmother. “It skipped a generation. My mother couldn’t give two figs about interiors, we lived in a really modern house, but my grandmother was an antiques hunter: even at the age of 103, she would still go out sifting for things in flea markets.”

Mehydene’s knack for mixing the handmade with high-street, old with new, is apparent throughout her home. In the sitting room there’s a midcentury modern arrangement of Kai Kristiansen chairs from eBay and a round table from Ikea, next to a propped-up lightbox Penguin book cover that travelled as hand luggage on the plane home with them from Singapore. An eye-catching limited-edition painting, Dipped Girl, sits beneath a modular pair of centrepiece lights that come from House Doctor.

Moving into the seating area, there’s a pair of France & Søn chairs (again from eBay), next to a “Claude” sofa by Pinch – “My favourite possession as it was the first thing we bought as a couple.” Above it, there’s a contemporary photograph by Julie Pike, where the subject appears to lie on an identical sofa: “When I had time to lie down on sofas that was my default position,” adds Mehydene, recalling a time before children.

Creating vignettes is something Mehydene does on every spare surface, using collections of postcards, handmade ceramic dishes – all catnip on Instagram. “My home is a showcase for my business, and friends wonder how I have the energy to answer questions about where everything comes from, but this is what I do.” It would be clutter to some, but to Lisa it is a comforting part of a narrative that runs through the house she’s made her home.

For more details, go to edit58