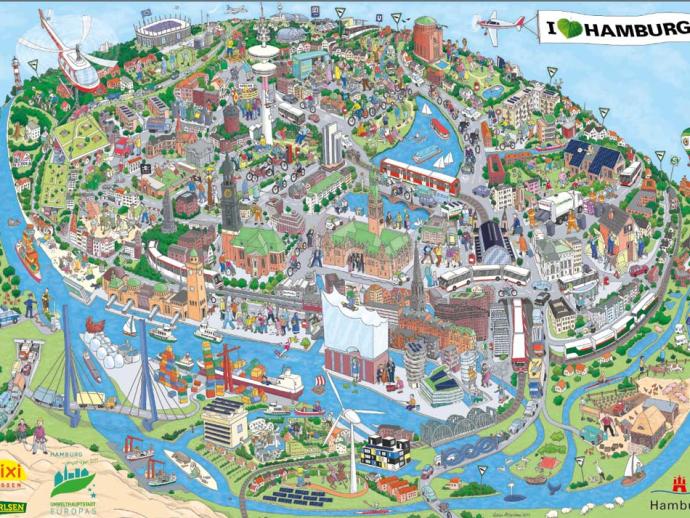 This article titled “Hamburg’s answer to climate change” was written by Elisabeth Braw, for theguardian.com on Thursday 31st October 2013 14.33 UTC

Boris Johnson, don’t read this: there’s a European commercial hub that promotes bicycling as the main mode of transportation. It is, in fact, embarking on a plan to build a network around bikes and pedestrians, linking car-free roads to parks and playgrounds, from the city centre to the suburbs.

Welcome to Hamburg, an environmental pioneer in the mould of its regional neighbour Copenhagen. Its planned green network will cover 40% of the city’s area. “It will connect parks, recreational areas, playgrounds, gardens and cemeteries through green paths”, Angelika Fritsch, a spokeswoman for the city’s department of urban planning and the environment, tells Guardian Sustainable Business. “Other cities, including London, have green rings, but the green network will be unique in covering an area from the outskirts to the city centre. In 15 to 20 years you’ll be able to explore the city exclusively on bike and foot.” The green network will even connect animal habitats, enabling critters to crisscross the city without risk of being run over. Perhaps more importantly, the network will absorb CO2 emissions and help prevent floods when inevitable superstorms strike.

“Hamburg has always been a green city with lots of parks”, notes Jens Kerstan, leader of the Green Party in Hamburg’s state parliament. “The green network makes sense from a climate change adaptation perspective, especially since our residents are quite progressive when it comes to climate change adaptation. Many Hamburgers are willing to give up their cars, which is very unusual in Germany.”

Climate change will, in fact, leave cities little choice but to develop plans like the green network. Fritsch points out that thanks to its sea winds, Hamburg is better positioned to combat warmer temperatures than, say, Berlin. But increasing temperatures are already affecting this North Sea metropolis as well. “Today the average annual temperature is nine degrees Celsius, 1.2 degrees more than it was 60 years ago”, reports Dr Insa Meinke, director of the North German Climate Bureau at the Institut für Küstenforschung (Institute of Coastal Research). “When we have a cold winter there are always people saying, ‘so where’s your climate change now?’, but the cold winters are simply fluctuations.” According to data from the Institute for Coastal Research, Hamburg had five hot (above 30 degrees Celsius) summer days last year, compared to two in 1952.

Climate change is already affecting the port city’s water level as well. “Compared to 60 years ago, the sea level here has risen by 20 centimetres”, explains Meinke. “As a large city, Hamburg is truly at risk. Storm surges could rise by another 30 to 110 centimetres by 2100.” Hamburg, in other words, needs its green network because it will help limit the effects of floods.

There are benefits to tackling climate change early on. Cities know that if they make themselves greener and more pedestrian-and-bike-friendly, they’ll attract more of the people they need to remain competitive. According to Fritsch, given that residents – especially children, the elderly and the ill – will suffer when temperatures rise, making the city climate as comfortable as possible is “very important in order to provide quality of life for our residents looking ahead to 2050”. Dr Sven Schulze, an analyst at the Hamburg Institute of International Economics (HWWI), notes that the green network could take up space that’s needed for housing and businesses, but “on the other hand, it brings economic advantages because it attracts highly educated and competent people to the city.”

That’s, of course, a recipe successfully pioneered by Copenhagen. But unlike Copenhagen, Hamburg hasn’t got very far in implementing its grand design. “The green network is an excellent idea, but we’re still in the early stages”, notes Kerstan. “The visionary thinking is done by the civil servants, not by the politicians currently in charge. Ever since Fukushima, the focus in Germany has been on moving away from nuclear power, not on climate change adaptation.”

Currently some 30 city staff are developing the green network, aided by personnel in the city’s seven districts. When politicians make the green web a priority, it will be an extensive network indeed, covering some 7,000 hectares. And Fritsch’s team envisions a network that doesn’t just help residents get from point A to point B in a sustainable fashion. “It will offer people opportunities to hike, swim, do water sports, enjoy picnics and restaurants, experience calm and watch nature and wildlife right in the city”, she explains. “That reduces the need to take the car for weekend outings outside the city, which further reduces the damage to the environment.”