Salvatore Ferragamo is commemorating the 150 years since Florence was named capital of the Kingdom of Italy (1865-1870) with “A Palace & The City” exhibition. The exhibition is a journey back in time, turning back the clock mounted on the Palazzo Spini Feroni’s façade in Firenze.

As the minute hand moves counter clockwise, visitors go back in time, and as for all Museo Salvatore Ferragamo exhibitions, their journey begins with the world of Salvatore Ferragamo, who chose this palace because he understood how important it was for a fashion designer to work in a place steeped in history and culture.

When Salvatore Ferragamo (1898-1960) left America and arrived in Italy in 1927, he was already a successful man. He chose to settle in Florence because the city wasknown around the world for its fine artisanal and artistic traditions. For the first few years after his return,he did not devote much attention to local customers or the area where he was based. However, after his bankruptcy in 1933 in the wake of the 1929 crash, Ferragamo realised he had neglected Florentine high society and needed a place where he could receive these customers. Palazzo Spini Feroni, with its history and excellent location, was the answer. He purchased it in 1938 and from that time on, the building has been a central element in Ferragamo communications, in which a fine artisanal product is complementedby the image of a unique place, used for the company’s letterhead and the front of its shoe boxes, as well as in advertisements. Palazzo Spini Feroni was also featured on the first Ferragamo silk scarf, made in 1961 and based on a drawing by the artist Alvaro Monnini, founder of Geometric Abstractionism. After Ferragamo died in 1960, the palace remained the company’s headquarters and a symbol of the brand. 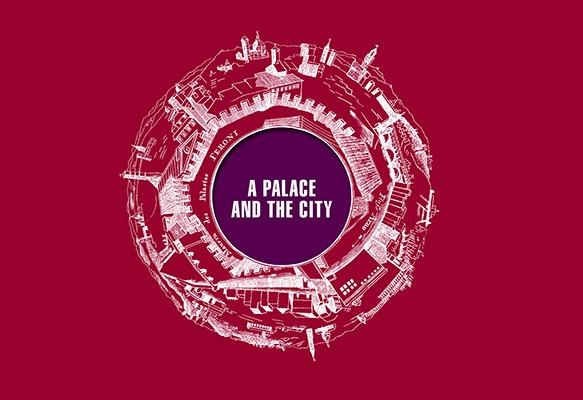 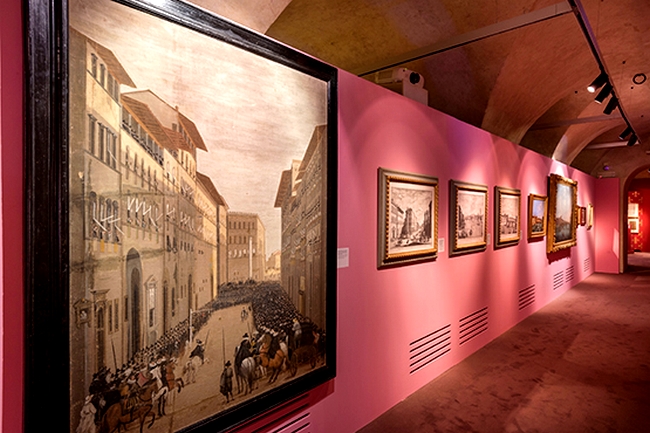 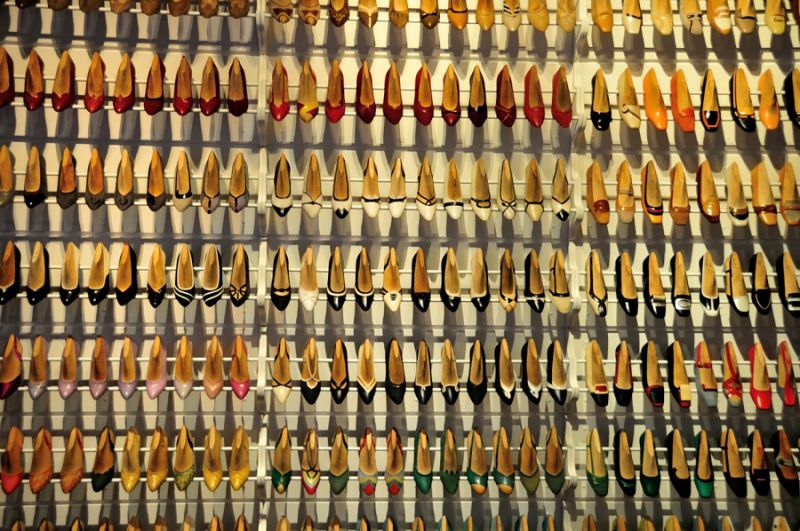 The palace’s story is told through film clips and photographs, but the true stars of this room are the shoes on display: 650 evening styles and 264 daytime styles, designed by Salvatore Ferragamo and his daughter Fiamma from the 1950s to the 1960s, in a setting reminiscent of the original room where they were keptto serve as a source of inspiration for new collections. A few of Ferragamo’s most famous wedgies from the 1930s and 1940s are arranged on a table.

Inspired by the 1806 diorama that has been used to represent the exhibition, a video installation captures a 24-hour day inside and outsidethe palace, showing the activities carried out and the people who work in the building in relation to the life of the city today. 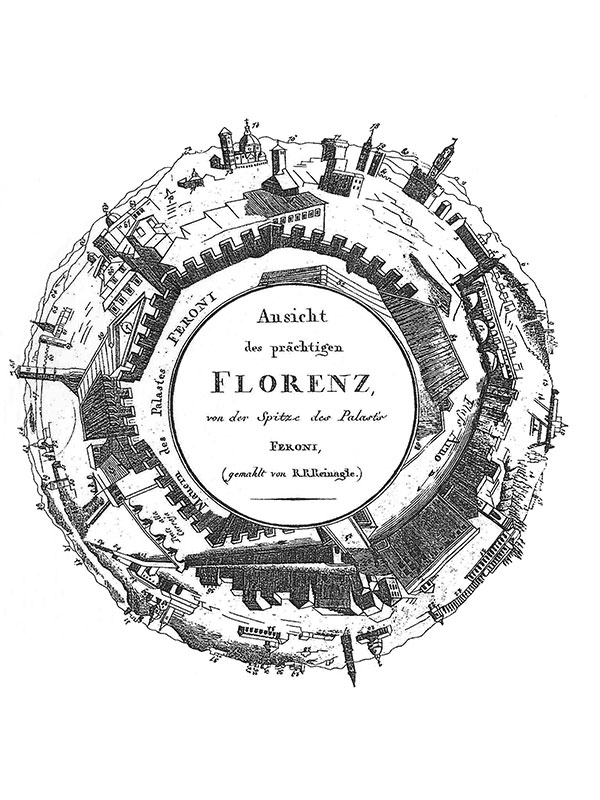 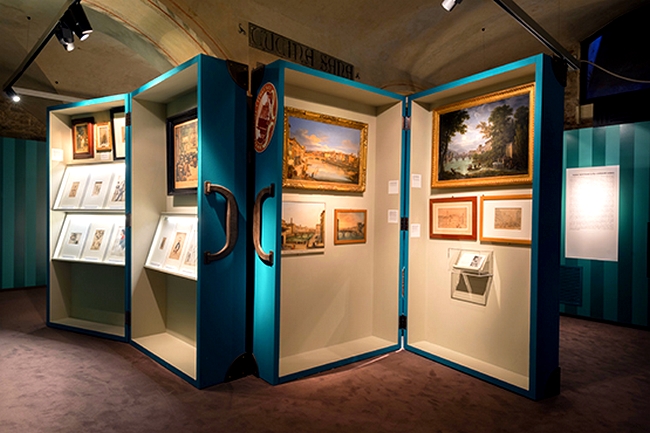 In the twentieth century, with so many residents and the various activities that it held, Palazzo Spini Feroni was a city within a city. It is difficult to trace a straight path and cover all the chapters in its history, unless we let images speak for themselves. This room displays photographs from important archives, such as the Alinari and Foto Locchi collections. Arranged on three stands, similar to postcard displays for tourists, the photographs are divided into themes. One section is devoted to the world of Ferragamo, to everyone who has worked and
continues to work in the palace, from Salvatore Ferragamo and his daughter Fiamma, who took over design for the company when he died, to the rest of the Ferragamo family. The second stand depicts the relationship between the palaceand the life of the city, with historic footage of the destruction of the Santa Trinita bridge in 1944 and its reconstruction, along with images of the flood of Florence. The third stand displays photographs of Palazzo Spini Feroni’s interiors and exteriors, shot specifically for the exhibition by the photographer ArrigoCoppitz.

View is the new silk scarf created specifically for this exhibition. Measuring 90 cm by 90 cm, it was inspired by the engraving of a 360° view of Florence from the top of Palazzo Spini Feroni that was used as the image for the exhibition. The scarf features the palace in its centre, surrounded by a floral wreath, and is available in six colours. 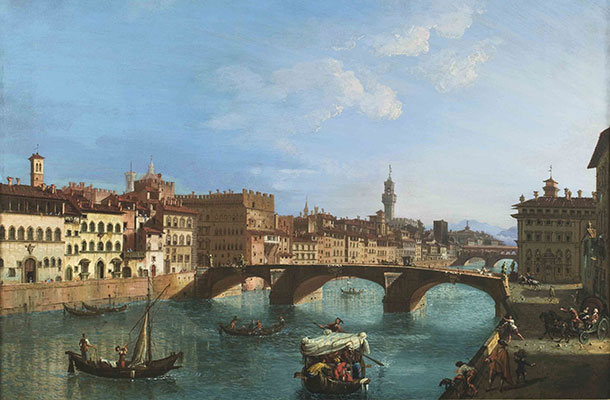 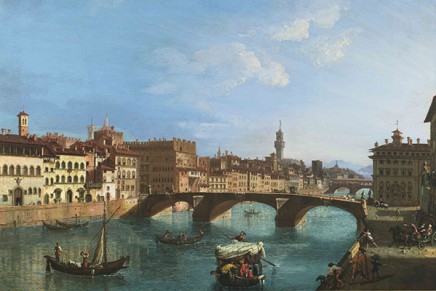 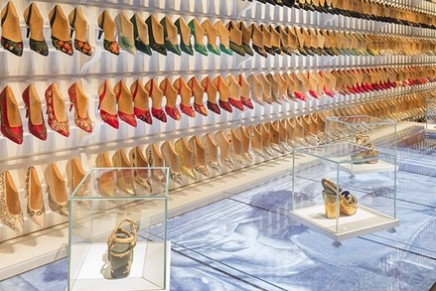 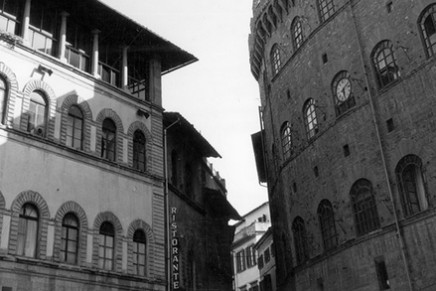 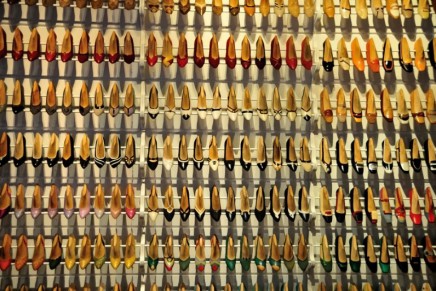 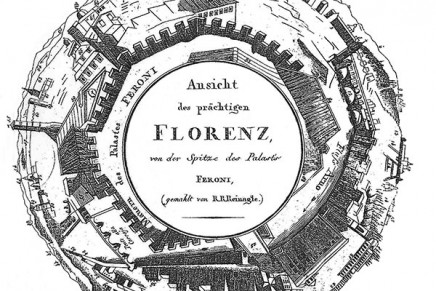 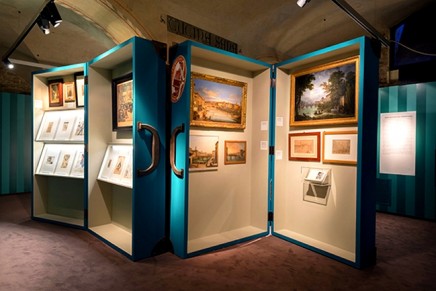 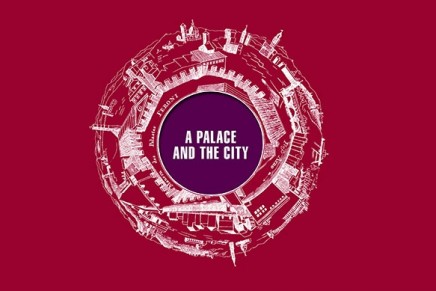