A boldly contemporary model intended for trendsetters and influencers, Christophe Claret Maestro watch offers a spectacular view of the movement and the snake’s sinuous body, which may be admired from every angle and along every sleek scale. The sinuous, meticulously hand-engraved body of the African snake coils around the movement of the Maestro Mamba 28-piece limited edition. 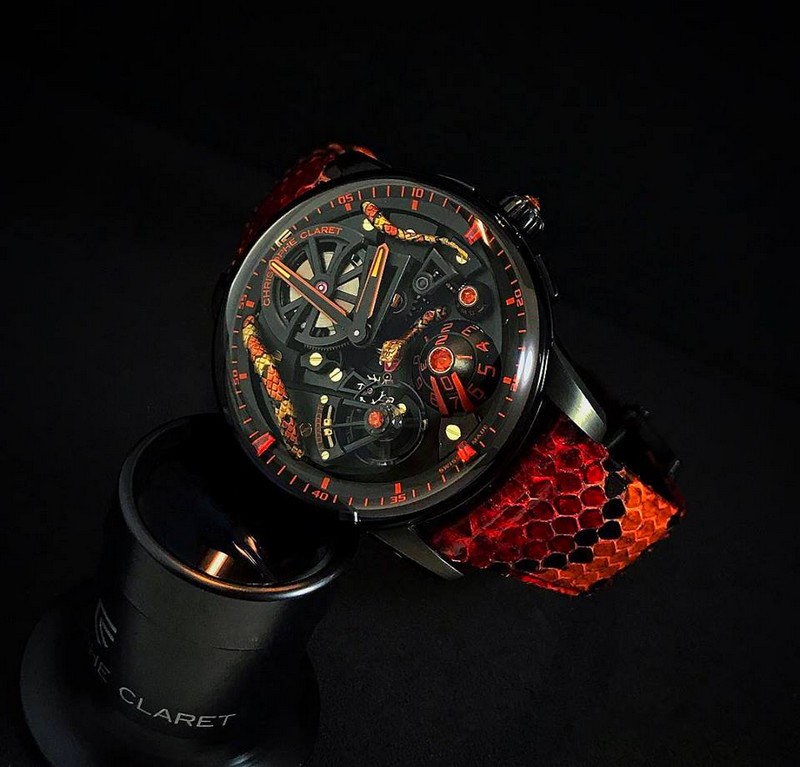 The Maestro watch was a natural choice to accommodate the rippling coils of the Mamba snake. Following the model unveiled in 2017 and infusing a ew dynamic into the Tradition collection, Christophe Claret Maestro Mamba timepiece appeals through both its shape and its proportions, including the pure and powerful lines of its 42 mm black PVD-treated titanium case topped by an impressive sapphire crystal dome. 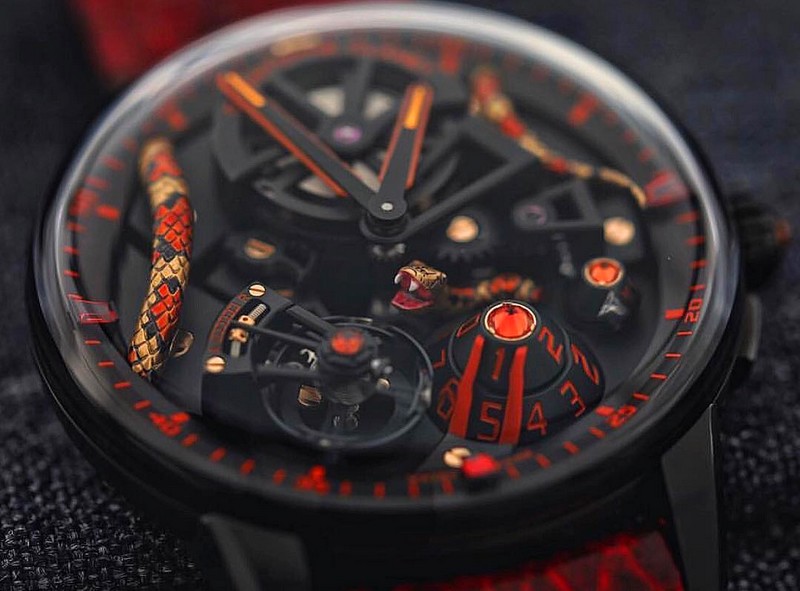 The overall construction is revealed through a multi-dimensional architecture.

Like all timepieces by Christophe Claret, the Maestro showcases a wealth of details mingling technical and aesthetic elements in an exceptionally coherent manner. The luxury watchmaking brand enthusiasts will recognize the watchmaker’s inimitable touch in the famous Charles X stepped and skeletonized bridges – with 26 interior angles – that have become a signature of the Maison. The skeleton-working of the bridge supporting the escapement represents a clever blend of classicism and modernity that affords a chance to appreciate all its subtle features.

The visual adventure through the intricacies of the movement continues with two seriescoupled barrels ensuring optimal efficiency and majestically positioned at 12 o’clock. Here too, the bridges are skeletonized to provide an exemplary view of the blade spring of the first barrel and thus enable the wearer of the watch to gauge the state of the seven-day power reserve. 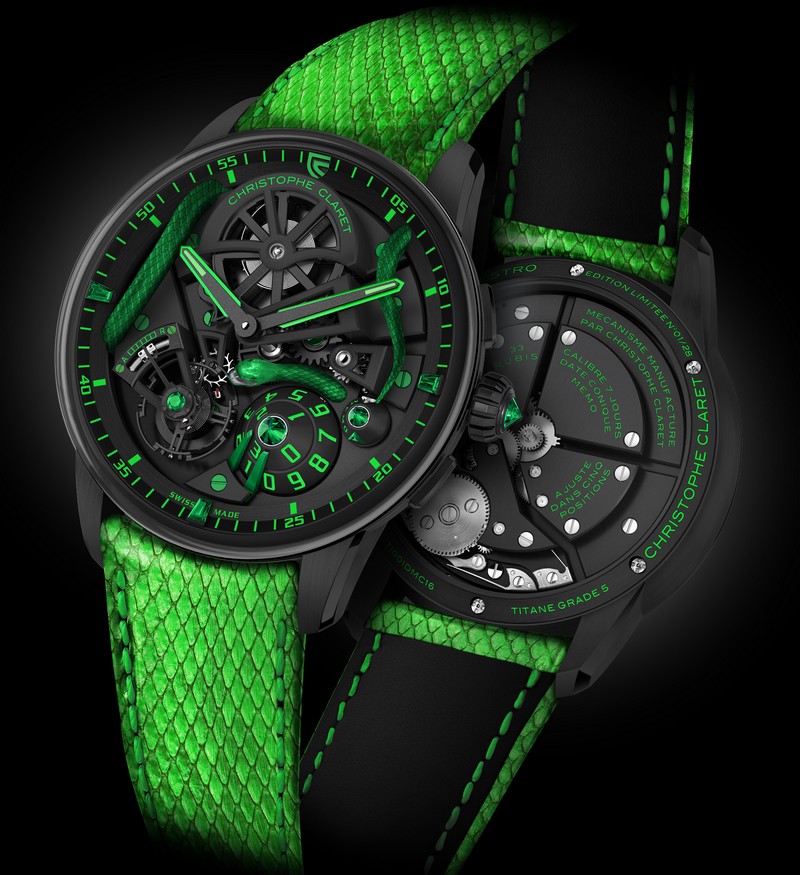 A return to fundamentals

In terms of horological complications, the Maestro Mamba once again illustrates the creative audacity cultivated by Christophe Claret. Witness the patented large date display at 5 o’clock, composed of two cones – one for the tens on the upper part and the second for the units – and performing a semi-instantaneous jump between midnight and twenty past midnight. As if to echo the 3D effect of this voluminous date display, the Maestro’s characteristic MEMO function appears between 3 and 4 o’clock.

The MEMO is an ingenious mechanical reminder intended for absent-minded individuals as well as fans of technical gadgets. Whatever daily objective the owner of the Maestro has set himself, the MEMO is there to remind him of his commitments. In the initial position, meaning when the owner must  do something, a tsavorite appears at 6 o’clock on the side face of the MEMO, like the gem set at its top. Once the objective has been met, a simple press on the pusher at 2 o’clock pivots the MEMO function, which will display a diamond on its side face at 6 o’clock, instead of the tsavorite. The MEMO will return to its initial position each night in a twenty-minute process driven by a semi-instantaneous jump system.

Having decided to craft the strap in authentic green Mamba skin, Christophe Claret left no stone unturned. An obstinate quest led him to Mozambique, where the Mamba was hunted on land belonging to the owner of the largest tsavorite mine – which is why the watchmaker chose these gems to adorn the Maestro Mamba. 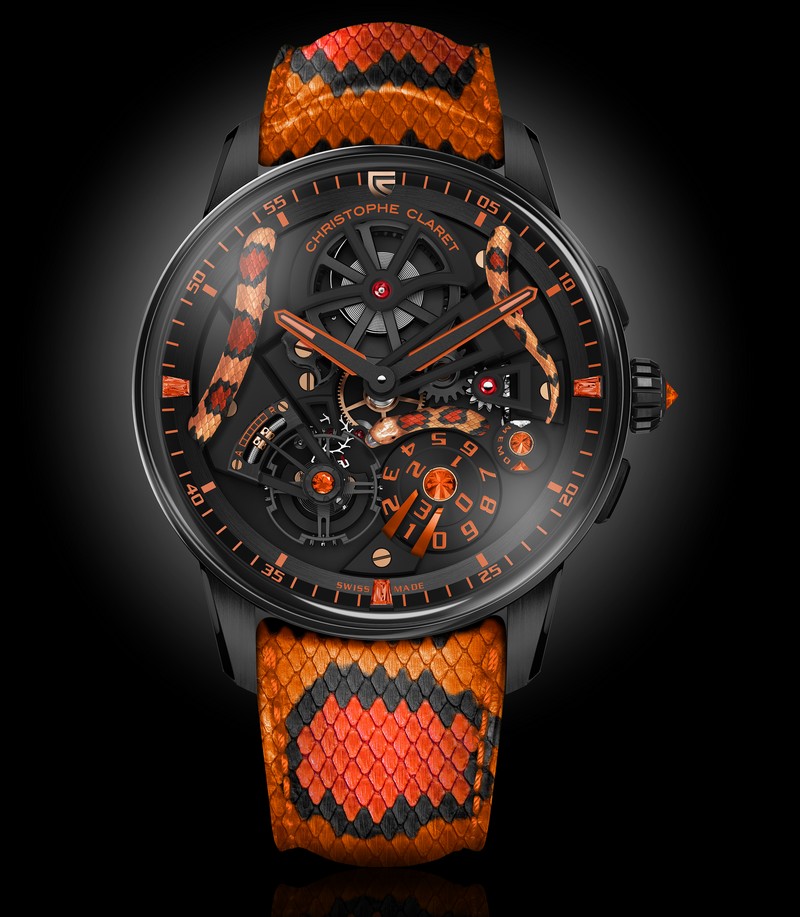 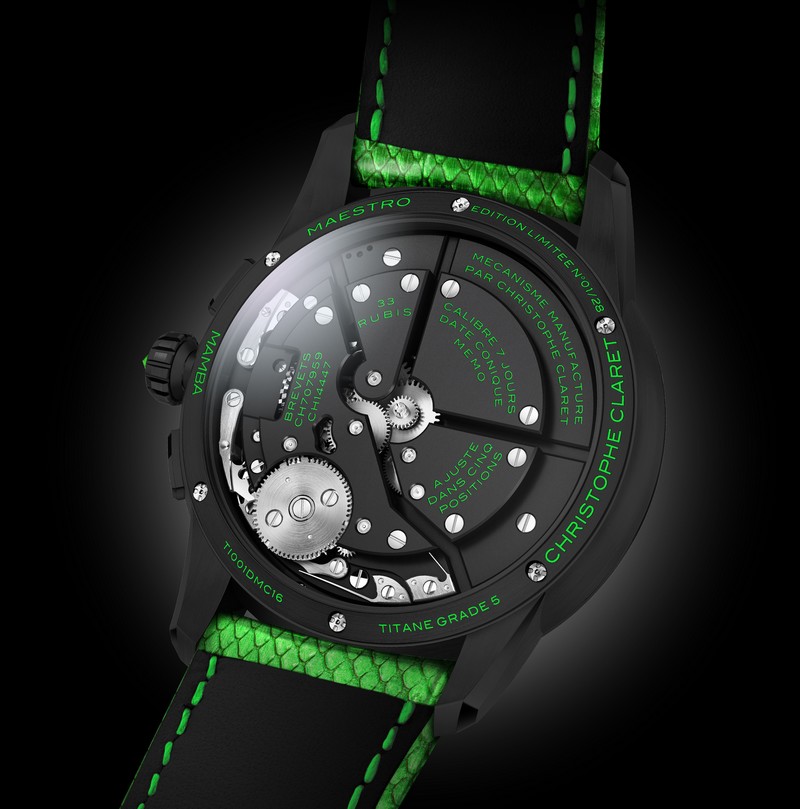 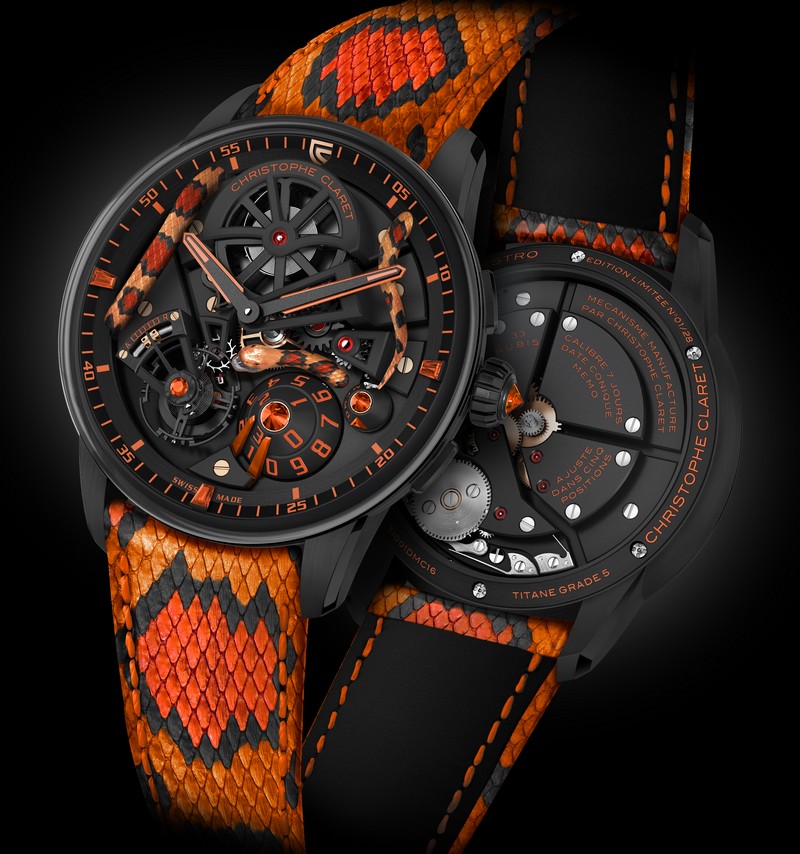 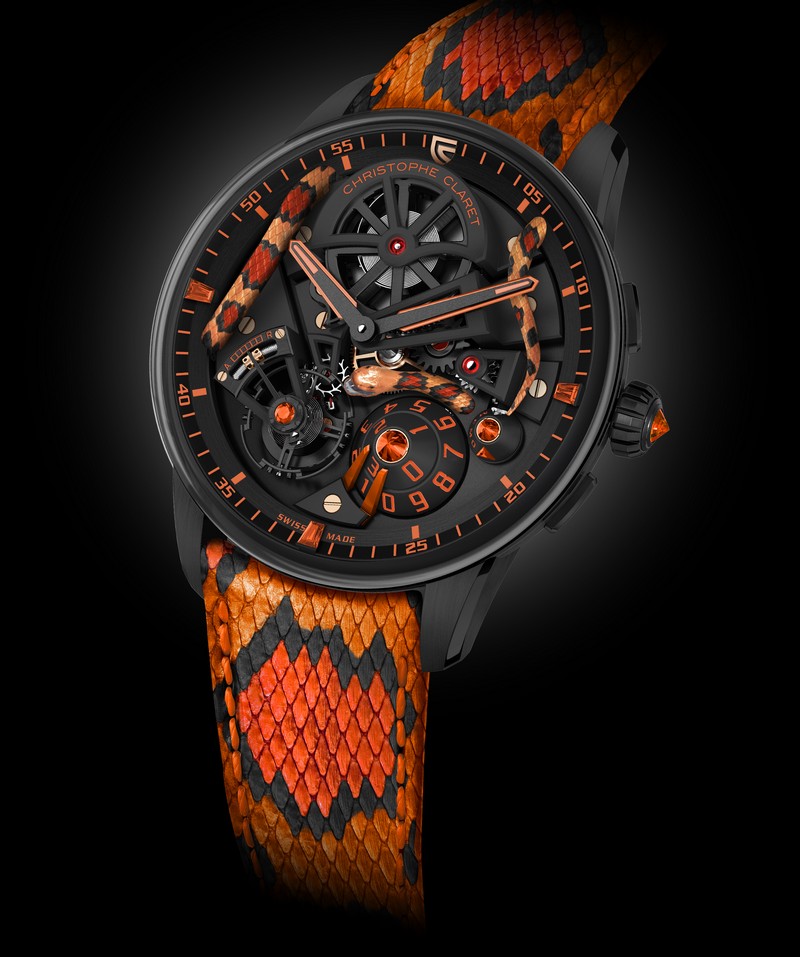 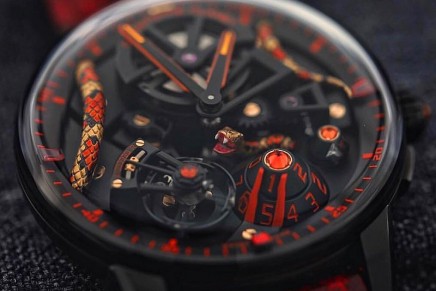 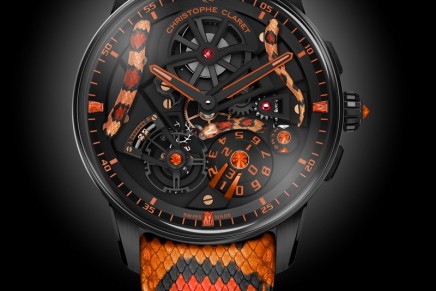 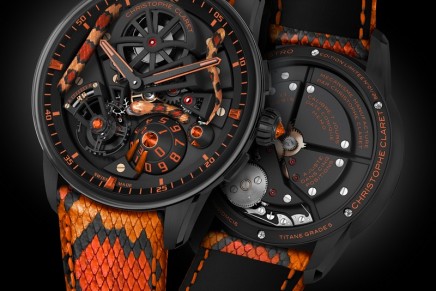 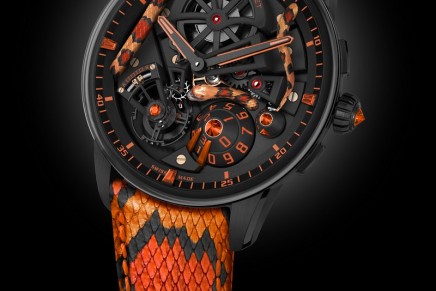 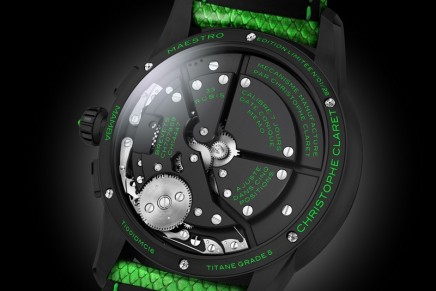 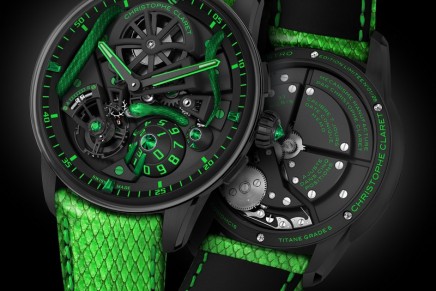 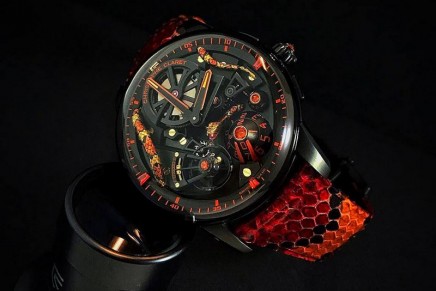