Bucherer x Harley-Davidson unveiled the world’s most expensive motorbike – an exciting combination of custom motorcycle design and the art of jewellery making. A team of eight employees from both companies contributed all of their expertise. 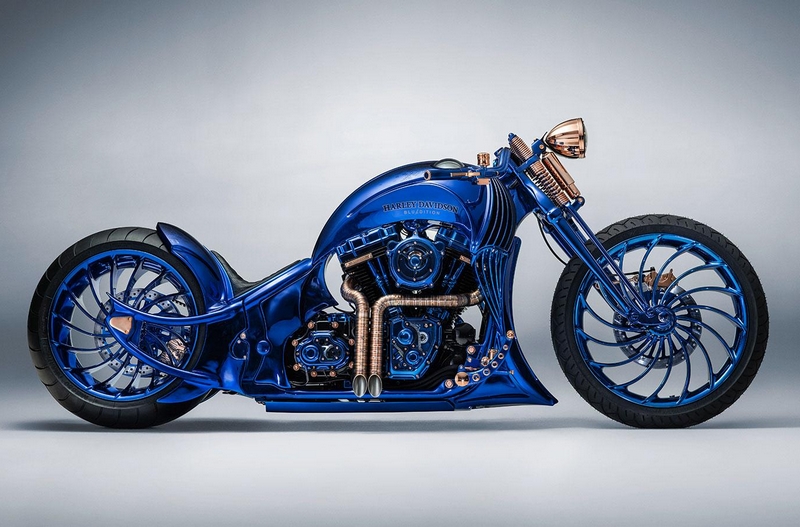 This one-of-a-kind motorcycle is the product of imagination of Bündnerbike, the Swiss custom Harley-Davidson workshop, and Swiss watchmaker and fine jeweller Bucherer. The £1.33 million motorcycle features fine jewellery embellishments paying tribute to Bucherer Blue collection and features a custom-made watch based on the Patravi TravelTec II model. Every metal element found on this one-of-a-kind motorcycle has been produced, welded, beaten, ground and polished by hand.

Based on a Harley-Davidson Softail Slim S motorcycle, the motorcycle customised by hand in Maienfeld, is the ultimate in self-expression.

But it is not only the 360 diamonds, gold-plated screws, two safes that are integrated into the tank and contain a one-of-a-kind watch from Carl F. Bucherer as well as rings from Bucherer Fine Jewellery, or the thrilling design of the engine that make this iridescent blue bike – the only one of its kind in the world – a true work of art. At CHF 1.888 million, it is also the most expensive motorcycle in the world.

Never before have a manufacture watch and jewels been integrated in a motorcycle. The Dizzler rotating ring from the Bucherer Fine Jewellery collection was adapted for the Harley-Davidson BLUE EDITION to allow it to be mounted on the hand grips. “That was a technical challenge,” says Jürg Ludwig Jr, Managing Director of Bündnerbike. “To ensure that the rings really stay in place, a special method was applied that guarantees a very strong hold. How this works remains a secret of the Bündnerbike blacksmith,” explains Ludwig. A further pair of Dizzler diamond rings can be found on the forks, while a large version of the Dizzler ring is located in the left half of the tank. 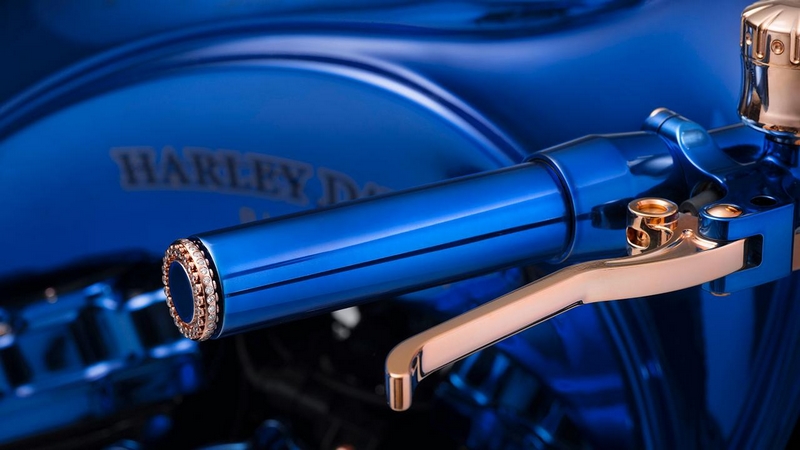 Underneath a glass dome made from armoured glass, another piece of jewellery of special value can be found in a retractable safe: a six-prong Heaven solitaire ring with a 5.40-carat diamond. This is also a unique feature, as is the watch from Carl F. Bucherer at its side. This special custom-made watch, which is based on the Patravi TravelTec II model, is located in a second safe in the right half of the tank. The dial of this unique piece is adorned by elements of a motorcycle engine. To ensure that the vibrations of the engine do not damage the mechanical movement, the watch
is housed in a cage with an elaborate holder made from silicon rings.

“It was a long road,” said Samir Merdanovic, head of manufacture movements at Carl F. Bucherer, of the development process of the The Harley-Davidson Blue Edition. “The holder, for example, also serves as a watch
winder. The watch is therefore wound regularly and continues to run, even if the motorcycle is not ridden for an
extended period.”

“We are pleased to be able to contribute our long-standing experience and close relationship with our partners inorder to create exclusive and unique watches and products as part of the Bucherer Blue Editions,” said Patrick Graf,CCO at Bucherer. “This allows us to appeal to customers around the world who want to stand out from the crowd andlive the Blue Editions lifestyle.”

The complete frame of the motorcycle is welded seamlessly, and even the rims are custom-made. The rotating camshaft is visible through a window in the camshaft housing, as are the valve control and the gold-plated throttle valves. Heat-resistant LED lights illuminate the scene. The Harley-Davidson BLUE EDITION is thus the world’s first motorcycle to have a motor that is lit up from the inside. Various parts of the motorcycle are also gold-plated. The cowhide saddle has been sewn by hand in Switzerland. A special detail: the iridescent colour. A specific techniquehad to be employed to illuminate the Harley-Davidson in this intense blue. In a first step, the entire motorcycle was silver-plated, before six colour coatings were then applied using a secret coating method. 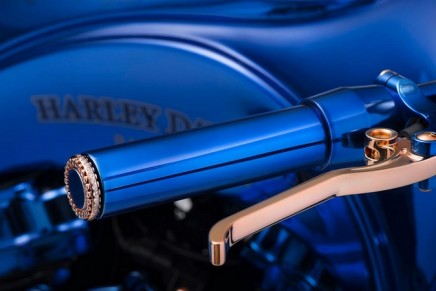 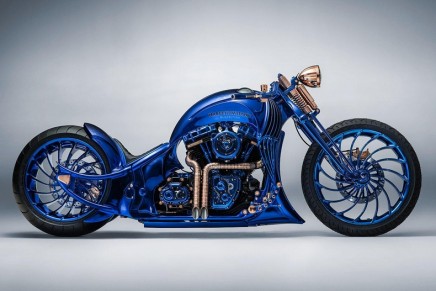 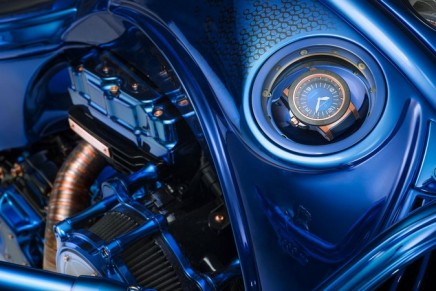