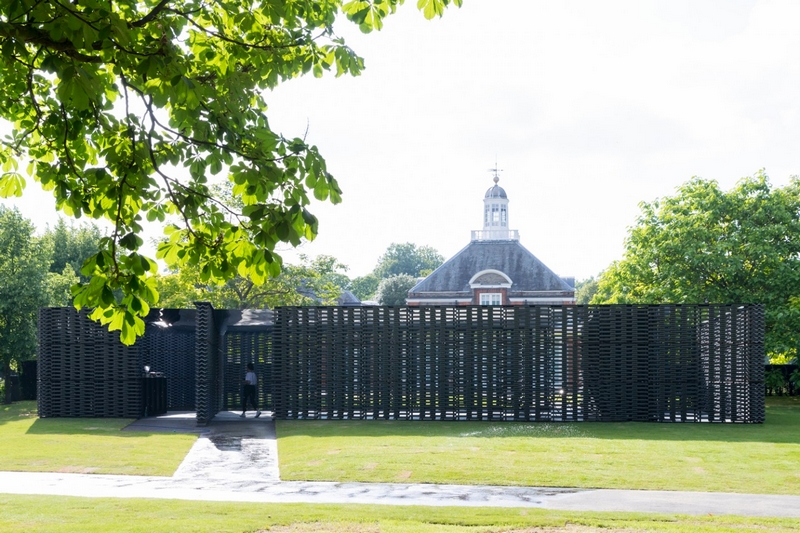 A dark wattle fence appears to ring the lawn of the Serpentine Gallery in London’s Kensington Gardens, as if the tasteful construction hoarding of this year’s summer pavilion has yet to be removed. As you walk closer, the woven walls turn out to be made from stacks of cement roofing tiles, threaded on to steel poles, forming a series of translucent screens that envelop a concrete patio. Step inside and the space unfolds beneath a drooping mirror-polished roof, creating an intriguing cave of reflections washed with dappled light and the glistening puddles of wet footprints.

Mexican architect Frida Escobedo has pre-empted the treacherous English summer by providing a shallow pool of water inside her cool courtyard, ensuring that enthusiastic visitors will leave with soggy socks. At the press preview, a few nervously tiptoed into the water, as if trespassing on the pristine reflecting pool of a luxury block of flats. When the space is unleashed to the public this weekend, hopefully many more will go for a paddle to bring this serene, elemental space to life – and be treated to a refreshing footbath in the process.

At 38, Escobedo is the youngest architect to be chosen for the Serpentine Gallery’s annual commission, and only the second solo woman to be selected since Zaha Hadid designed the first pavilion in 2000. It follows the gallery’s welcome direction in recent years of highlighting lesser-known names from around the world.

“When I received the email saying ‘Serpentine Gallery – Invitation’, I assumed I was being invited to join the mailing list,” says Escobedo, sitting in the shade next to her brooding creation. “There have been so many beautiful inventions here by famous architects that it was hard to come up with a new idea.”

She needn’t have worried. Her dark walled courtyard draws inevitable comparisons with Peter Zumthor’s cloister of 2011. But where the Swiss maestro’s tar-daubed box felt like a rather airless mausoleum of plants, Escobedo’s perforated container breathes with air and light. It is at once rough and sharp-edged, the rugged ends of the cement tiles contrasting with the scalpel-like corners of the stainless steel canopy, which floats above the dark space, providing distorted reflections and opportunities for plentiful ceiling selfies to come.

The steel frame has been left raw, with welds exposed and a pleasing bloom of rust already beginning to show. It is a structure that will age well, hopefully covered in climbing plants, wherever it ends up after this summer’s festivities. As one of Escobedo’s team says: “I would love to see it abandoned, taken over by nature.” It is an unlikely fate, given where structures of previous years have ended up – including as a beach cafe, garden feature and wedding marquee.

Fresh from launching their first Chinese Serpentine pavilion in Beijing, gallery directors Hans-Ulrich Obrist and Yana Peel are keen to emphasise that Escobedo’s project is “a beautiful harmony of Mexican and British influences”. The perforated walls, or “celosias”, are a reference to the breeze walls characteristic of Mexican architecture, while the standard English roof tiles are tied to the London context by an invisible layer of artistic symbolism. Some walls are oriented to the prime meridian line, established in Greenwich in 1851, the same year the Great Exhibition turned this corner of the city into a cultural quarter. It’s a nice story, although the 8,000 “off-the-peg” tiles are specially fabricated pieces, pressed with a pair of holes to enable the threading.

There is extra pressure for this year’s pavilion, given what is looming on the horizon nearby. A little to the east, beyond the trees, now floats the truncated pyramid of Christo’s Mastaba, a mountain of 7,500 oil barrels stacked up and soon to be cast adrift in the middle of the Serpentine lake. It is an impressive feat on paper, shown in Christo’s characteristically dynamic drawings, but it now looks surprisingly puny in the expansive context of the park. Seen from the bridge, it has the scale of one of the many temporary stages that often pop up here among the trees.

Christo and Escobedo (respectively 83 and 38 years old in a poetic twist) have conjured their works from the repetitious stacking of standard objects. But while one is a monolithic monument, to be admired from afar, the other provides a subtle spatial sequence, mute from outside, which reveals its qualities the longer you linger. Escobedo’s walls dissolve from opaque to translucent as the sun shifts, while the shapes of visitors play across the ceiling in a mirrored bulge. It may look dour when empty, but it is a backdrop for splashing visitors and the lively programme of Serpentine Park Nights and Radical Kitchen picnics to come over the summer.

There was a danger that Escobedo’s low-key enclosure would be overshadowed by the high-octane spectacle of her neighbour, but the reverse is true. Her rough, tough, contemplative haven more than holds its own beside the king of the big gesture.