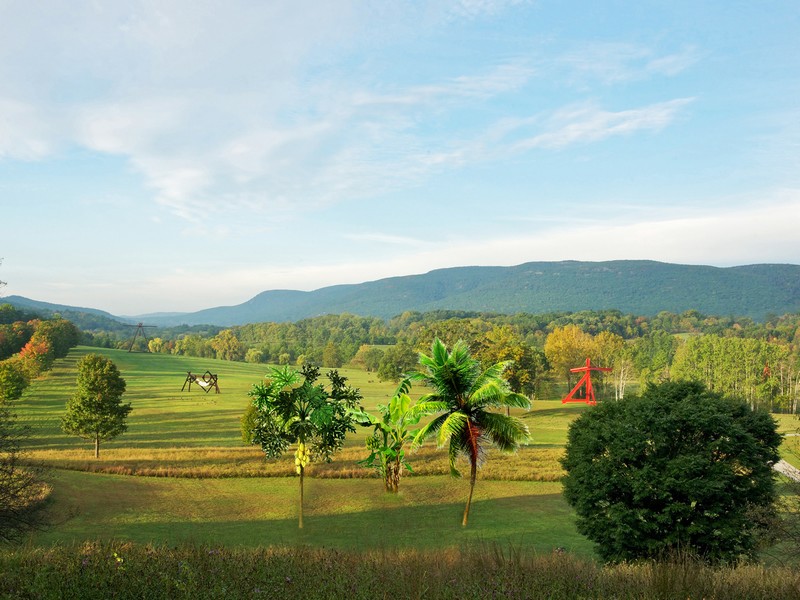 This article titled “Artists on climate change: the exhibition tackling a global crisis” was written by Nadja Sayej, for theguardian.com on Wednesday 30th May 2018 10.00 UTC

The week before the Storm King Art Center opened its public art exhibition on the 500-acre premises in Mountainville, New York, there was a tornado.

It was fitting considering the topic of the exhibition, Indicators: Artists on Climate Change, which features over a dozen artists who tap into climate change “and hopefully, take action to help curb its advances”, explains the curator, Nora Lawrence.

While Storm King started out as an environmental initiative in 1960, this exhibition feels as timely as ever considering the state of the world: temperatures rising, arctic ice melting and polluted air affecting millions around the globe.

“I think it’s always urgent, but we have been seeing the effects of climate change on our own site for years,” says Lawrence. “We’ve also seen how artists have been dealing with these issues, so it was something we thought made sense for us to address.”

Instead of deploying terrifying statistics, protest placards and scientific arguments, this exhibition takes a different approach to activism. “What I’ve seen is that artists are able to touch people in ways that not everyone can,” says Lawrence. “Artists can zero in on a topic that asks people to consider their surroundings anew.”

One highlight is the work of the New York artist Justin Brice Guariglia, who shows a solar-powered LED highway message sign that reads “We Are the Asteroid”. It’s a phrase from eco-philosopher Timothy Morton, who calls out the human effect on the planet.

“It’s to bring attention to the issue from another angle, to look at what humans are doing to provoke climate change,” says Lawrence. “When we think of asteroids, we think of something that will doom the earth, but in this case, it’s actually coming from our own human activity.”

Another piece is by the protest art group Dear Climate, who have created 20 banners around the site. They’ve called it General Assembly and have fashioned the flags to match the circle of world flags outside the United Nations Headquarters in New York City.

One flag says “Say hello to hurricanes”, while others read “See the sea levels”, “Give me luxury or give me breath” and “Heed your greens”.

“They’re meant to be both serious and funny, but to ask people to think about the issue,” says Lawrence. “Most of their works are downloadable from their website, so they can be distributed beyond an art center like us.”

The exhibition is not necessarily didactic; it’s meant to offer a variety of opinions and outlooks. “We wanted to make this an artist-forward exhibition,” says Lawrence. “Climate change isn’t one thing with one way of looking at the world. We wanted to look at climate change like a syndrome with different factors that taps into something larger, because not every artist is approaching it from the same angle.”

Along the stunning landscape of Storm King – about 60 miles north of New York City – one thing stands out: the palm trees, of all things. They were planted there by artist Mary Mattingly for her artwork Along the Lines of Displacement: A Tropical Food Forest. There is a set of three tropical fruit trees, including coconut palms and a ponytail palm, which were shipped from Florida. Since an expected temperature rise of 4C is expected across the globe in the years to come, could residents ever harvest a palm tree in upstate New York?

“This piece asks us: ‘What are the opportunities that climate change could bring our way? And how can we be ready?’” asks Lawrence. “Are there ways we might be able to harvest certain crops in the future? And in a place like Alaska, if we are dealing with climate change, what kind of opportunities will there be to harvest if the ice is melted?”

Another piece is by Tavares Strachan, who shows a neon-lit blue wall piece, which reads: Sometimes Lies Are Prettier. It taps into our own misleading thoughts about climate change. “It might be more pleasant to be inside of air conditioning than think about its affect,” says Lawrence. “It’s easier to think about nature [as something] that is always there for us than something we need to tend to.”

One artwork is more like a treasure hunt. Permanent Field Observations, by David Brooks, puts art enthusiasts on a mission to find his 30 bronze sculptures, each of which look stunningly real, amid Storm King’s forested area.

“David spent time finding moments in the woods that aren’t permanent, moments he wanted to cast into bronze; a stick with a bunch of mushrooms on it, leaves, a stone, branches,” says Lawrence. “The bronze piece will outlast the original works of nature, so the artist asks people to imagine they’re on a scientific expedition and to think like a scientist.”

The exhibition is not to only ponder climate change, but also to consider our actions. “It’s to find new ways to think about our environment and climate change and our own place in all of that,” says Lawrence. “Art asks us to change the way we look at the world, where we are in life and what our responsibilities are.”