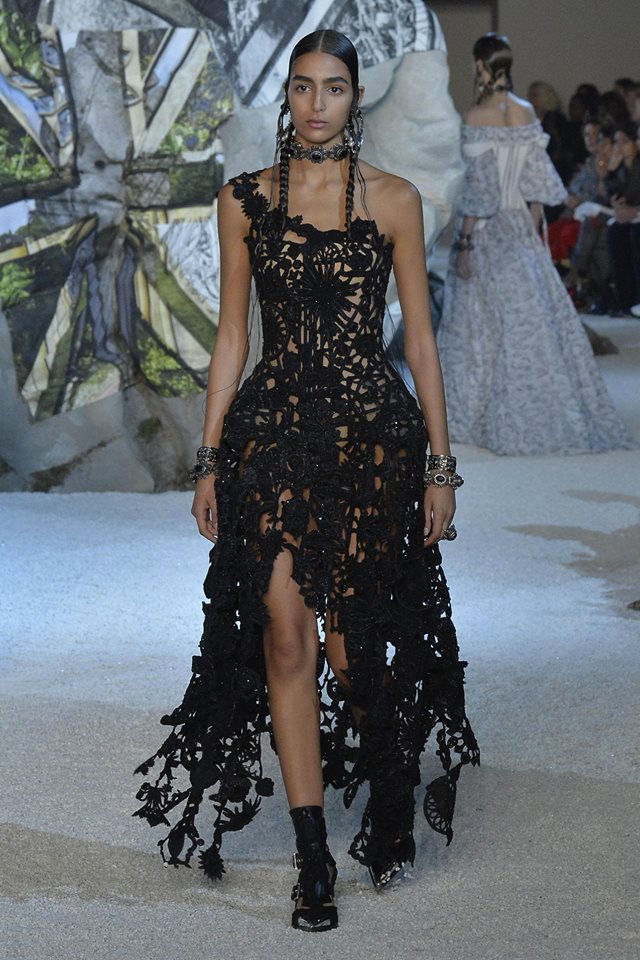 Sarah Burton mixes strength and fragility to create a picture of female power that feels part of the cultural conversation; photo: alexandermcqueen; facebook.com/AlexanderMcQueen

This article titled “The woman warrior gets romantic at McQueen show in Paris” was written by Lauren Cochrane, for The Guardian on Monday 1st October 2018 20.59 UTC

Women as warriors taking on the world has been at the heart of the Alexander McQueen brand since it was founded by Lee Alexander McQueen in 1992. At the moment, that idea is increasingly relevant. So the Paris fashion week show on Monday night, by his successor Sarah Burton, felt like it was part of the cultural conversation.

With the backdrop of a stage set designed to look like rock formations, models strode out in dresses that were, at heart, delicate and romantic – with dirndls, cocktail dresses and printed flowing frocks. There were also evening dresses with cutouts and silver fringing, razor-sharp trouser suits and red carpet-worthy floor-length gowns with 3D printing.

The women wearing these clothes were not just something pretty to be looked at, however. With body armour, piled-up jewellery, bold earrings, biker boots and slicked back pigtails, the cast – diverse across race and body size – looked strong and, to use a word of the moment, empowered.

After greeting well-wishers backstage, Burton explained that the team had travelled around England visiting the Avebury stones, the White Horse in Uffington and poppy fields. The collection was “a woman’s journey but I didn’t want it to be a woman who was powerful for the sake of being powerful, so I felt it was also the journey of a woman’s life – birth, death, marriage, sisterhood, community and the idea that you can be powerful by expressing emotion.”

What female power looks like was maybe the crux of the collection once again for this brand. “There’s a strength and a fragility, and a soft and a hardness,” said Burton.

Inspiration came from 18th-century embroidery, Dante Gabriel Rossetti’s paintings of Jane Morris and vintage pieces such as an old Christening dress. Ultimately, though, Burton is a designer who thinks about how to translate these ideas into clothes that women want to wear. “I want to empower women but as long as they feel like themselves,” she said. “I think it’s really important, especially now.”

Alexander McQueen is owned by Kering, the conglomerate that also owns Gucci and Balenciaga but counts Gucci as its star brand. The company said in September that McQueen has “considerable untapped potential” and plans to rectify this with expansion. The first McQueen store in India is in the works and more product lines are being developed.

This may be helped along by the industry around the brand’s founder, who died in 2010. A documentary about the designer was released this summer, showing the tormented genius behind the designs. While Burton is not featured in the film, she can be spotted working with McQueen in archive footage. Eight years on from his death, she has ensured his legacy of strong women and a romanticism steeped in history remains at the heart of the brand.