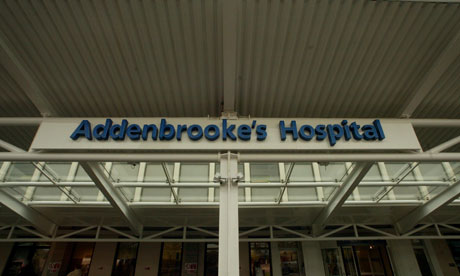 This article titled “NHS trust plans to become next big name in luxury hotels” was written by Daniel Boffey, for The Observer on Saturday 28th April 2012 19.48 UTC

For those with a taste for the best in life, the Ritz, Hilton and Malmaison are probably among the hotel brands of choice. But now a new entrant is hoping to shake things up – the NHS. And officials say it will shatter preconceptions and offer high-quality accommodation.

Cambridge University Hospitals, the NHS foundation trust behind the world-famous Addenbrooke’s and Rosie hospitals, is seeking a commercial partner to develop 35,000 square metres of NHS land and build a 150-bed hotel on it to rival the best in the hospitality business.

Everyone from the relatives of patients to tourists seeking to enjoy the broad horizons of the Fens or the ancient university town of Cambridge, two miles to the north of the proposed hotel, will be welcome to stay, it says.

And for those who are concerned that the food, often a bone of contention in NHS hospitals, might not be up to scratch, the trust’s executive director of corporate development, St Clair Armitage, has promised some quality control. While the NHS and a commercial partner will be the hotel’s legal owners, a hotelier will be brought in to run day-to-day operations. “We are good at healthcare; we are not hoteliers. So we will need a professional hotelier to do that,” said Armitage.

The hotel will be part of a £135m project, including a 600-seat conference centre and a private hospital, which it is hoped will be up and running by 2015.

The shadow health secretary, Andy Burnham, said he was concerned by the venture, which he believed could put the NHS’s ethos at risk. “[Andrew] Lansley’s decision to give NHS hospitals freedom to earn up to half their income from private patients is designed to open up commercial ventures like this,” he said. “It will change the ethos and focus of public hospitals and erode the fundamental values of the NHS. It is a worrying glimpse of where the English NHS is heading under this government.”

But Armitage insisted that all the costs of the project would be met by the private partner, once it was selected, and the NHS would only take a cut of profits from the facilities built. “We get two things, a guaranteed revenue stream, you could call it rent if you like, but we also get above the guarantee a share of the profits. But we do not take any of the risk.”

The hotel, which will have a gym and swimming pool next door, would also offer reasonable prices, Armitage said. “The partnership [created by the NHS and a private partner] will set the daily rates, so it will not be an NHS function at all. But there will be a variety of rates, because the mum whose child is having chemo will want a different level of facility than the Arab sheikh who has brought his retinue because his mother-in-law or whatever is having treatment in the private hospital. We do think it will be an attractive place to stay for people wanting a break, but it is not the primary reason for doing it.

“It’s a combination of things, but primarily there will be 18,000 people who come to work here on a daily basis, not just from Addenbrooke’s and Rosie hospitals, but the Medical Research Council, Cancer Research UK, GlaxoSmithKline, the Wellcome Trust, the University of Cambridge, all the people involved in life sciences in the broader sense,” said Armitage.

“It is also for people who come as patients with their relatives. The priority will be given for those other users first.The reality of that is that [access] will be different for different times of the week, different times of the year. So, for example, I don’t think we will be planning a major medical conference when the Cambridge May balls are on.”

The private hospital, hotel and conference centre are part of the trust’s wider expansion plans, which it expects to double the size of the existing facilities to create a 140-acre “medical city” by 2020. Other buildings will be the new £165m Papworth hospital, a £120m specialist children’s hospital and a £200m laboratory of molecular biology.

Inevitably, however, it is the hotel that is catching the public’s imagination and Armitage says he is keen that the NHS does not disappoint. “The important thing for us is that it is high quality, not necessarily how many stars it has, because stars go with facilities,” he said. “But if it is on quality, yes, we expect it to have a number of stars.”