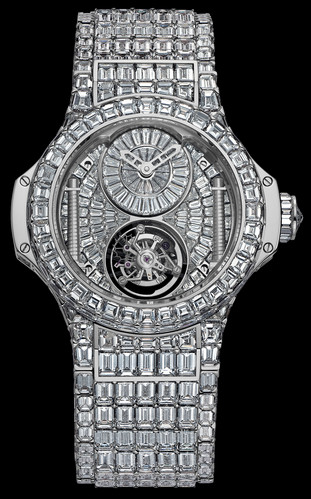 Women are bolstering the high-end watch business
Hublot Chief Executive Officer: “You have three good reasons to work on this population”

Ladies watches is a market worth $3.9 billion last year and set to grow 30 percent between 2010 and 2015, excluding inflation, according to researcher Euromonitor.

“Women are buying more than men, women are buying more often than men and women are very influential over men, so you have three good reasons to work on this population,” Hublot Chief Executive Officer Jean-Claude Biver said in an interview. Hublot, bought by LVMH Moet Hennessy Louis Vuitton SA in 2008, aims to present the one-of-a-kind $5 million watch next year.

Hublot, which sold a $3 million diamond-laden Big Bang model within a day this year, is upping the ante by creating its most expensive timepiece ever, encrusting it with as many as 300 carats of diamonds to grab the attention of its new target market: ladies’ watches.

Wealthy females snapping up bespoke $1 million pieces will help drive revenue growth of about 30 percent this year, Jean-Claude Biver said. While luxury stocks including LVMH hit one-year lows this month on concern that purchases from new millionaires in China may slow, Biver sees “no thunderstorm on the sea” for the industry in 2012. Women are bolstering its business, much of which has traditionally come from selling large, sporty watches to men.

As women increasingly see watches as an investment, Swatch Group AG’s Omega last year introduced its Ladymatic self-winding watches, which sell for as much as $42,700, while Patek Philippe started selling a ladies’ chronograph in rose gold this year for about $478,000.