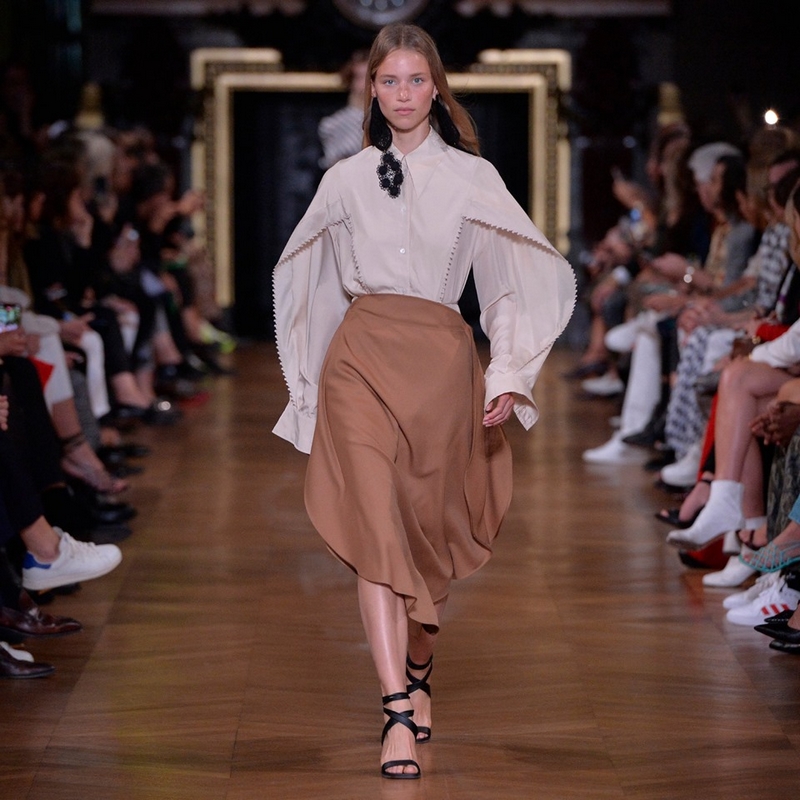 This article titled “Stella McCartney’s climate credentials bang on trend in Paris” was written by Jess Cartner-Morley in Paris, for The Guardian on Monday 30th September 2019 14.05 UTC

Stella McCartney would be on trend this season whatever she put on her catwalk.

Two decades after the designer launched her brand, the climate crisis is forcing the fashion industry to accept the principles of sustainability and respect for the environment that are central to her beliefs, and McCartney finds herself promoted from fashion’s fringes to a leadership role.

“It’s been an incredible fashion week for me, seeing how the climate crisis has become so explosive in this industry. Suddenly everyone is talking about it,” she said backstage at Paris fashion week.

This season, instead of a note explaining the inspiration behind the collection, she gave each guest a timeline detailing innovations in sustainable fashion over the past 19 years.

“I hope the timeline shows that some progress is being made. Things need to change immediately, but we also need to stay positive and hopeful. If you scare people so much that they are absolutely terrified, you can’t engage them. They need to feel they can make a difference.”

The night before the show, McCartney hosted a roundtable discussion on sustainability at the Palais Garnier show venue. Members of Extinction Rebellion and a founder of Bolt Threads, a Californian biotechnology company producing lab-grown silk and other fabric, took part in a discussion alongside environmentalist Yann Arthus-Bertran, and animal rights activist and actor Maisie Williams.

Her years of attempting to enthuse the industry about the environment before it became fashionable have made McCartney a dab hand at sexing up sustainability.

The catwalk show was accompanied by grainy video footage of zebras and hippos having sex, to a sultry soundtrack of Donna Summer singing Love to Love You Baby. The Stella vibe being very much on trend, it made good business sense for this collection to focus on the looks for which the brand is best known. So there was soft-power tailoring, a staple since McCartney’s days as a trainee on Savile Row, in shades of peach, toffee and soft, unbleached white.

There were 1970s-bohemian denim skirts, and silk blouses with scalloped edges. Amber Valetta, who had taken part in the previous evening’s sustainability discussion, wore a moss-green silk trench, while the wildflower prints on silk dresses came from photos McCartney took on bike rides through the English countryside. With recycled polyester, organic cotton, regenerated cashmere and handbags made of sustainable raffia or second-life plastics, it marked the brand’s most sustainable collection to date.

“But I hope that when you watch the show you don’t even notice that, actually,” the designer said backstage. “I hope that it’s just desirable and beautiful and luxurious.”

The brand has partnered with resale company TheRealReal in a deal which incentivises McCartney’s designer shoppers to participate in the circular economy by reselling their purchases. “We spend a lot of time on fabric technology, but the circular economy is another huge part of the story,” said McCartney.

“The youth of today, really they should be wearing vintage and secondhand clothes, and looking at renting clothes – and they are absolutely doing that. Fabric innovation, combined with this youth culture – it’s exciting.”

But despite her championing of the circular economy, McCartney is expanding the brand. Backstage after the show, alongside her father, Sir Paul, and fellow fashion designer Vivienne Westwood, she was joined by her new business partners, the Arnault family who control LVMH.

In July, one year after having bought back full control of her brand from her initial backers, Kering, McCartney announced that she was partnering with LVMH, the world’s biggest luxury house. She remains majority shareholder, but the deep pockets of LMVH, the owner of Louis Vuitton and Christian Dior, bring the opportunity for accelerated growth. As part of the agreement, McCartney holds the role of special adviser on sustainability to Bernard Arnault.

Natalia Vodianova, longtime favourite model of McCartney and wife of LVMH scion Antoine Arnault, did not appear on the catwalk this season but sat front row in a new-season Koba coat. Made from recycled polyester blended with a corn byproduct, Koba is a breakthrough in faux fur, a process that previously relied on environmentally damaging petroleum-based products.