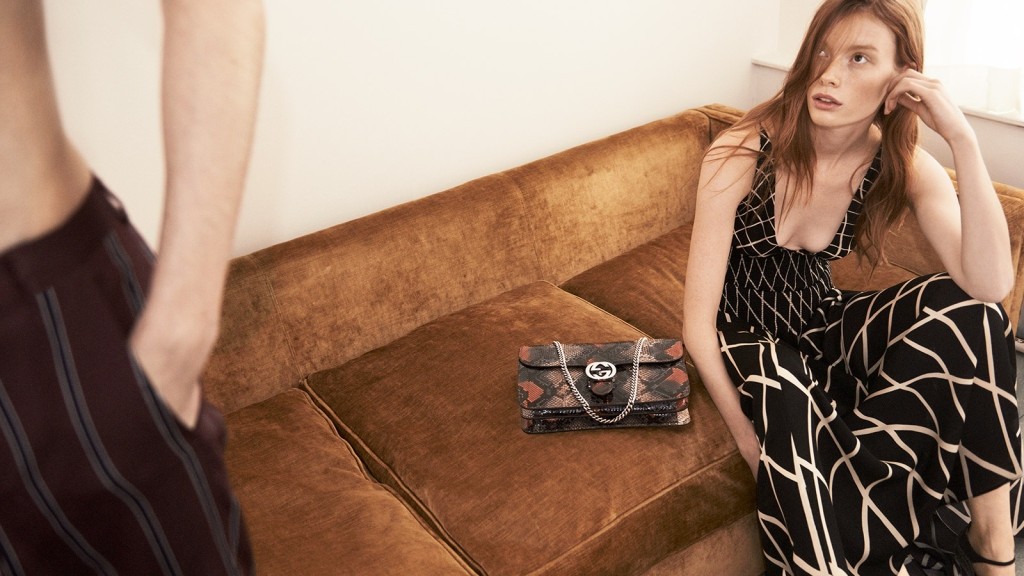 This article titled “So how do you make snakeskin handbags environmentally friendly?” was written by Edward Helmore in New York, for The Observer on Saturday 23rd May 2015 23.04 UTC

The handbags will still be python, the cotton silky, the leather soft, the designs au courant and the prices steep. In an international marketplace for fashion and luxury lifestyle, citizen-shoppers would have it no other way.

But last week, the global fashion giant Kering Group, owner of brands such as Alexander McQueen, Saint Laurent, Gucci and Stella McCartney, published a groundbreaking report that seeks to grapple with an issue that hangs over the fashion industry: how to weave sustainability into a business that often appears predicated on whim and superficiality.

An exaggerated, three-year effort in brand greenwashing designed to win competitive advantage in an industry fraught with overproduction, supply-side challenges and weak consumer demand, or a sign of a billionaire owner’s genuine commitment to sustainability and care for the environment?

It’s always possible to do two things simultaneously, of course, but the publication of Kering’s Environment Profit & Loss account – EP&L – is nevertheless a bold first for the industry.

The Kering chairman and chief executive, François-Henri Pinault, said he recognised that as part of the textile industry – “one of the most polluting industries in the world”– his company and those like it needed to share knowledge to create more sustainable business models. “Sustainable business is smart business,” he told Women’s Wear Daily. The report will “help us ultimately become a more robust and resilient business”.

The company says it studied 578 processes involving 107 materials in 126 countries to understand the damage caused by its businesses, and those of its suppliers.

Kering valued its use of natural capital – “the stock of natural ecosystems on Earth including air, land, soil, biodiversity and geological resources” – at €773m in 2013.

Leading the list of environmentally damaging practices is the production of leather, linked to the destruction of forestry and use of heavy metals, and cotton, which is hugely demanding of water. Kering’s EP&L estimates that leather alone accounts for 25% of its environmental impact, while 17% is linked to cotton.

Overall, Kering announced, supply-side damage stands at 93% of the total. Only 7% of impact comes from its own operations in shops, offices or warehouses.

In a rare interview last year, Pinault rejected the inference that Kering was simply greenwashing in the pursuit of market-share, saying his goal was not “a question of consumption, but rather consuming differently … We will get to a time when consumption will be clean.”

High ideals, certainly, but with the fashion industry locked into accelerating and seemingly unjustifiable cycles of production, curbing its use of natural resources toward genuine sustainability can seem far-fetched. Still, Pinault has been looking to get ahead of the fashion industry on the issue.

“We don’t integrate sustainability to communicate to clients,” says Marie-Claire Daveu, chief sustainability officer and head of international institutional affairs at Kering. “We do it because we believe sustainability is inherent to quality.”

Efforts toward sustainability frequently flounder, in part because the costs are too great except at the high end. Reforming production, whether for the high or mass-market end of the industry, begins with a thorough review, says Daveu: “If you want to implement concrete action, you have to know exactly where you are. It depends on the product, but everyone in the textile sector is able to implement sustainable action.”

So how far has Kering come? Gucci boasts of bamboo handbags made of leather tanned in a way that uses less water and no heavy metals. The Italian house turns leather cuttings – more than 200 tons in 2013 – into fertiliser, and has developed its own python farm in south-east Asia.

Last year, Kering ordered 55 kilos of certified Fairmined gold from Peru, and Stella McCartney promotes use of wool from sheep farms on Patagonian grasslands. The firm recently joined the Swedish fast-fashion chain H&M to test a new recycling technology that separates and extracts polyester and cotton from used garments to create new textiles.

Kering executives say they hope the assessment will help the company to make better production decisions that will ultimately filter down to mass-market or fast-fashion brands. “The journey is not the same but you can still see where your impact is and where to implement best practices,” says Daveu.

Executives say there is no eco-conversion story for Pinault to relate but his convictions are plain and deep. “If we wait for governments to solve the environmental crisis, not much will happen,” he told Women’s Wear Daily last year. “It is up to us to show initiative, to be extremely proactive and to go beyond simple compliance rules.”

Though Kering does not break down its environmental consequences by brand, it estimates that it is 40% more efficient in terms of natural capital than competitors. Since rivals such as LVMH have not produced a similar report, there is little to judge it against.

For corporate leaders to get out ahead on social issues – aka “corporate responsibility initiatives” – is also good business practice given the volume, ubiquity and lack of differentiation in luxury goods.

Pinault and his wife, the actress Salma Hayek, are clearly looking to establish the company as a socially and environmentally conscientious luxury powerhouse.

Last year, Pinault joined the protest against the Brunei-owned Dorchester hotel in London over punishments for homosexuality in the sultanate. Last week at the Cannes film festival, Pinault sponsored a discussion on the uneven role of women in film, and Kering sued the Asian e-commerce giant Alibaba over sales of counterfeit goods.

Christie’s overall take for the week – more than bn – and its generous use of guarantees offered to sellers drew speculation that Pinault was positioning it for sale. “You can view Christie’s as an interesting and amusing business to be involved in,” says one knowledgeable market watcher. “Or you’re grabbing market share at the expense of profits to ready it for sale – and sharpen up your business practice later.”

In both cases – Christie’s and Kering – Pinault is garnering headlines.

Climate change suggests that companies such as Kering need to get ahead of the issue or see their production falter in chasing scarce raw materials on a stressed planet. It’s not just a question of customers – or citizens, as Daveu prefers to think of them: the kind of employees Kering competes to hire are increasingly asking questions about sustainability.

Consumers may not want to be beaten over the head about sustainability when they are shopping for a handbag, but they want to know that it’s integral. “It’s important to show you can have beautiful, sexy, high-quality products that at the same time can take care of the planet,” Daveu says. “Every day it’s a challenge. It’s a long journey. We don’t always have the answers or know how to do it, but we have to try step by step to become more sustainable.”