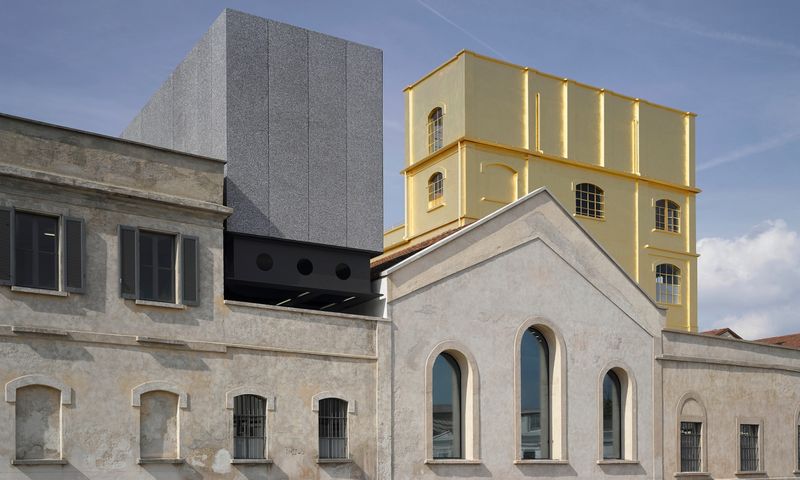 This article titled “Rem Koolhaas crafts a spectacular ‘city of art’ for Prada in Milan” was written by Oliver Wainwright in Milan, for The Guardian on Wednesday 6th May 2015 13.08 UTC

They have adorned bronzed bodies with luxury leather goods since 1913, purveyed sharp-cut suits and red-soled shoes to the stars, and grown into a bn global empire with more than 300 stores worldwide. But Prada’s most ambitious project to date has nothing to do with apparel at all. In fact, they’d rather you didn’t mention the clothes.

“We don’t want to pollute the Fondazione with fashion,” says Patrizio Bertelli, the managing director of the clothing conglomerate and husband of its chief designer, Miuccia Prada, sitting in their vast new arts complex in Milan. “That would exploit the artists, and they don’t like being used as an advertising tool.”

Prada and Bertelli take their art as seriously as their fashion, and are keen that their patronage isn’t misconstrued as a marketing ploy for selling handbags.

Established in 1993 as “an outpost to analyse present times”, the Fondazione Prada has staged roaming exhibitions of everyone from Anish Kapoor to Steve McQueen, commissioned installations from the likes of Carsten Höller and Thomas Demand, convened philosophy symposia, produced arthouse films and published 40 books and catalogues. Mrs Prada has even been invited to present the Turner prize.

Four years ago the foundation established a permanent venue on the Grand Canal in Venice, and this weekend it opens a brand new HQ in an old distillery to the south of its hometown. In a scruffy industrial area, beyond the railway tracks and the ring road, now gleams a 19,000 sq m creative playground with twice the gallery space of the new Whitney Museum in New York – a bold symbol of private-sector power, in sharp contrast to retreating public funding of the arts across Europe.

The complex has been masterminded by Miuccia’s go-to architect, Rem Koolhaas, whose practice, OMA, has worked with Prada for the last 15 years – an unusually long time for such a relationship to have continued without reaching the limits of the client’s patience or coffers. Their collaborations have ranged from flagship stores in New York and LA to an ambitious Transformer pavilion in Seoul (which necessitated a complex ballet of three cranes to lift and rotate it between events), to experimental catwalk shows. It has been an energising marriage of minds, the liberal patronage of Prada fertilising Koolhaas’s desire to rewrite the rules from scratch every single time.

“It has been incredible to discover the efficiency of fashion,” Koolhaas enthuses, the thrilling pace of the industry clearly a key lure for the impatient Dutchman, not to mention the associated glamour of the brand. (He is, after all, a man who keeps his phone in his socks so as not to spoil the line of his trousers.) “In eight hours they can organise something sublime which, for us, would take a minimum of eight years. That speed is deeply inspiring.”

The 70-year-old architect shows no signs of slowing down. Despite having two broken ribs and a bandaged finger after a run-in with a forklift truck earlier in the week, he is keen to show me every detail of what is evidently one of OMA’s richest projects to date. And thankfully one that doesn’t shout its presence at full volume. Instead, like Prada, it is quietly expensive, wearing its untold wealth with style.

Unlike the look-at-me klaxon call of Frank Gehry’s Fondation Louis Vuitton in Paris, which trumpets the invasion of the luxury brand into the contemporary art world by flouncing its billowing glass sails above the Bois de Boulogne, you might not even notice the Fondazione Prada. From outside, the only giveaway is a small golden tower poking up above the pantiled rooftops of the former distillery. It is 4kg of gold leaf, simply applied across the surface of an existing building. “Gold is a very cheap cladding material,” says Koolhaas, “compared to marble or even paint.” It has transformative properties too: even on an overcast day, this gilded beacon casts a warm aura over the entire site.

Enter the complex – which is walled around the perimeter like a monastic campus – and a sleek glass-box gallery slides into view, providing a shop window through which the current display of classical statuary is visible, muscular silhouettes marching across a terraced landscape inside, liberated from their plinths. Styled like a stripped-back Miesian pavilion, the gallery is topped with a second exhibition space that thrusts out in a dramatic cantilever, supported by a chunky exposed I-beam, just missing the building across the courtyard.

Such finely tuned moments of tension recur throughout the complex, where new and old hang in balance, not quite colliding – an effect amplified by unexpected material contrasts. The new buildings are clad in what looks like rough stone or pebbledash from a distance, but turns out to be foamed aluminium, a material used in the military for bomb-blast absorption, here deployed as a shimmering skin. The same material continues inside, as if these blocks have been hewn from a solid mass of metal foam – a nod to the office’s own design process, carving blocky massing models from styrofoam. Used on the exterior, it makes the building feel at once massive and impossibly lightweight, held up by a single steel prop.

Elsewhere, polycarbonate walls meet floors of wooden setts, brushed aluminium collides with travertine, metal mesh emerges from poured resin. It is a rich bricolage of the opulent and everyday that recalls some of OMA’s best earlier projects, like the Kunsthal in Rotterdam (1992) or the Dutch Embassy in Berlin (2003), but here wrought with an unparalleled attention to detail – in a large part thanks to the care of Italian project architect, Federico Pompignoli, and a substantial (but undisclosed) budget. Handrails are beautifully set into walls, as if milled from a block of metal with the precision of a Macbook Pro, and love has even been lavished on the loos, which feel as special as the galleries themselves.

This level of craft enriches spatial sequence as it unfolds across the site, keeping your attention primed for what might appear around the next corner. Beyond a cobbled yard from the glass-walled pavilion stands another existing warehouse structure, now sliced in half and clad with mirror-polished steel along its newly exposed flank, which contains a cinema where a new Roman Polanski commission is currently being screened. Its facade can open up like a 30m-long letterbox for open-air screenings, as can the glass wall of the gallery – making the perfect dimensions to insert a catwalk for a fashion show. (Such events are certainly not planned to be held here, insists Bertelli, upholding the separation of Prada’s church and state. But surely the lure will prove too great to resist.)

Across another courtyard, floored in steel grating, stands a former grain silo, now converted into three well-like exhibition spaces, showing installations by Eva Hesse and Damien Hirst. Above it, by next year, will loom a 10-storey tower in white concrete, conceived as a gigantic stack of shelves for the foundation’s archive of past installations, with progressively taller floors, expanding in height from 3m to 10m by the time you reach the summit. Why the need for a tower, when the site is so big? “Because art feels different on the ground than it does on the 10th floor,” says Koolhaas, with his usual deadpan logic.

But such variety of experience is the guiding principle for the whole project. Walking through the campus is like strolling through a catalogue of curatorial techniques and display strategies: there is the open-plan hall with its panoramic windows; there are the deep, raw concrete silos, with the industrial heft beloved of so many curators; there are narrow spaces carved out of the old distillery wings, and then domestic-scaled rooms in the golden tower. And in perhaps the most unexpected moment of all, there is even a bar designed by director Wes Anderson, conceived as a temple to 1950s Italian cafe kitsch, just waiting for Bill Murray to roll in.

“We have tried to find ways to go beyond the gallery wall and create a real diversity of typologies and conditions for the display of art,” says Koolhaas, marching me quickly through an enfilade of rooms, past a Barnett Newman, Donald Judd, Jeff Koons and a 15th-century “studiolo” – a little marquetry-panelled studio – recently acquired and displayed here, strangely disembodied in the middle of a space lined with brown velvet. The route then bursts out into a gigantic industrial shed, dotted with artists’ cars by Elmgreen & Dragset, Sarah Lucas and others, happened upon through a small door as if you’ve accidentally wandered into the garage store.

It is a compelling campus in which to while away a day (at €10 a ticket), but the only nagging question hanging over this spectacular new little city of art is if the Fondazione has the capacity to live up to what the facility offers. There is no permanent curator, merely a “Thought Council” of advisers, nor is there any plan for what exhibition might follow the opening show. Still, given the pace at which she is used to conjuring fashion shows and her ability to rally together the art world glitterati at the drop of a hat, Prada will probably make it work. Where there is Miuccia’s will, there’s a way.