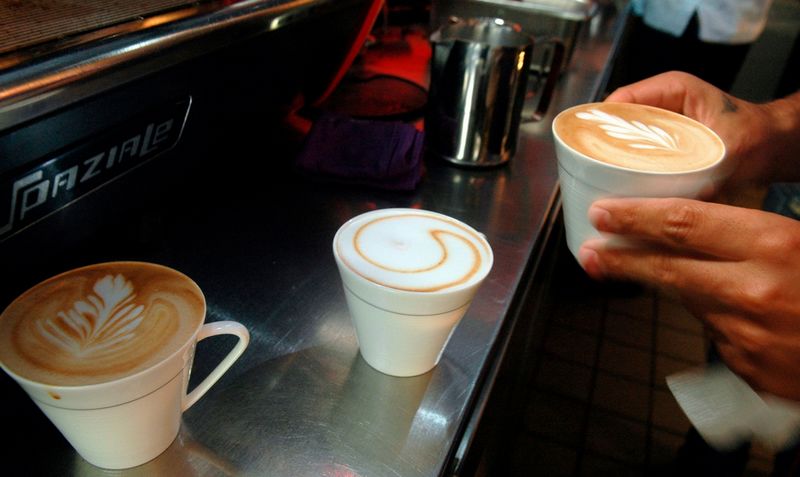 This article titled “The UK company turning coffee waste into furniture” was written by Josephine Moulds, for theguardian.com on Tuesday 5th May 2015 15.06 UTC

Britain was falling in love with coffee just as Adam Fairweather was exploring ideas for new products and materials. Ten years ago, Starbucks stores were opening on every corner, followed by the burgeoning industry of artisan coffee roasters.

Fairweather, a designer by training and expert in recycling technologies and materials development, now develops materials from coffee grounds and uses them to design products including furniture, jewellery and coffee machines.

A poll of 2,000 Britons by Douwe Egberts in 2012 found 69% spent between £1 and £5 in coffee shops five days a week. “We use coffee as a moment to take a break, it’s a luxury product,” says Fairweather. “The idea that it already had this high value but we only use a little of it, that was interesting because I felt that there was a way of tapping into this perceived high value the product has intrinsically.”

On average, we use just 18% to 22% of the coffee bean when we make a cup of coffee but Fairweather says that coffee waste is not “the biggest problem”. “There are already massive recycling programmes in the UK that manage organic food waste very well. My interest is that we can use materials that have a perceived value to them, to communicate and get people excited about the idea of sustainability and social change and environmental management.”

Fairweather first tackled coffee waste by helping to develop the Greencup scheme, which provides offices around the UK with Fairtrade coffee and then collects their waste coffee to turn it into fertiliser. His new venture, Re-Worked, works with Greencup, so he has a ready supply of waste coffee grounds and a list of potential clients who may be open to the idea of other products made from their coffee waste.

Google uses Greencup’s service and has bought designer furniture from Re-Worked, created with a hybrid material made up of 60% used coffee grounds. “They’re all very quick sales,” says Fairweather. “It’s five or six conversations rather than hundreds, because we already have a relationship with the catering facilities management.”

Re-Worked has also teamed up with Sanremo, which uses a material made of 70% coffee grounds for the decorative housing of its Verde coffee machine. Fairweather says they have sold 300-400 of these each year since it was launched in 2013 and they are currently being installed in Wyevale garden centres around the country. High-end jeweller Rosalie McMillan makes use of another of Re-Worked’s materials, combining it with gold and sterling silver for her Java Ore collection.

Scaling up for profit

Re-Worked is a non-profit and Fairweather says the quest for funding has been one of his biggest challenges. “I’m really under-resourced. Because it’s been pioneering work, it’s made it quite hard to get the buy-in from people. We’ve never had huge amounts of wealth in the background to make things happen quickly.”

Re-Worked does generate revenue from trading, which it invests back into the business but Fairweather says the organisation still relies on grants. “In all honesty it’s not been massively profitable. The way we sustain ourselves is by getting government support.” This funds ongoing research into new materials and better production processes.

Fairweather says the process of making materials from coffee grounds would be economically viable if Re-Worked were to scale up. “Doing the life-cycle analysis of materials, is a very good way of seeing whether or not something stands up. If it’s more environmentally friendly, generally it’s more economically-friendly, because it means that you’re using less of everything.”

Fairweather only wants to scale up, however, if he can maintain true to the original aim. He says the company explored the option of developing a low-value product, making fuel pellets out of coffee, to act as a staple to keep the business running. That hit a stumbling block when he realised they would have to take waste coffee from other sources and not just Greencup.

He admits he is not particularly commercially minded and that is, perhaps, why Re-Worked is not a million-pound business. “I’m not a marketer I’m more of an inventor. I like to invent the stuff. I like to work problems out.”

The circular economy hub is funded by Philips. All content is editorially independent except for pieces labelled brought to you by. Find out more here.