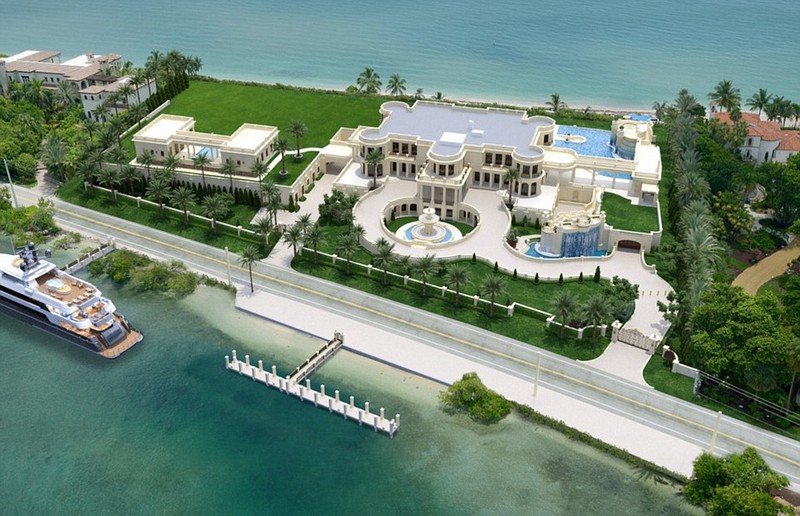 This article titled “‘No corner was cut, nothing was too expensive’: the strange story of the most expensive private listing in America” was written by Richard Luscombe, for theguardian.com on Monday 16th November 2015 17.35 UTC

Sometimes, the 11 bedrooms and 17 bathrooms in your house simply aren’t enough. Just ask construction tycoon Robert Pereira, whose 60,500-square feet Florida mega-mansion went back on the market this week because he apparently changed his mind about wanting to live there.

The asking price of $159m makes it the most expensive private listing in the country. The lucky buyer of the 4.4 acre Hillsboro Beach estate, if there ever is one, will become the proud owner of an on-site nightclub, ice-skating rink, bowling alley, go-kart circuit and private Imax cinema alongside the cavernous residence.

Yet behind the ornate gates, which are gilded of course in 22-karat yellow gold leaf, and beyond the $2m marble staircase of the property dubbed Le Palais Royale after the Versailles palace it was modelled on, lies the story of a family whose extreme wealth and extravagance seems to constantly be leading them on to the next best thing.

Pereira, who founded the Massachusetts-based Middlesex Corporation in 1972 and amassed a fortune from asphalt paving, bridge building and the construction of railway stations, among other projects including a 13-year tenure as strip club co-owner in Tyngsboro, has always had an eye for excess. He bought the waterfront mansion through a trust in 2001 with the intention of developing the site to provide a luxurious home for his family to enjoy, friends told the Guardian.

“The owner had a vision and wanted to build something spectacular,” said Mayi de la Vega, the Miami real-estate agent handling the sale.

“No corner was cut, nothing was too expensive. They wanted the very best of everything and really thought it through. You feel the quality when you walk through the property, the craftsmanship and attention, it’s all there.

“They used the finest materials, there’s $3m worth of gold leafing. At one point they wanted to live there.”

For Pereira, such plenitude is nothing new. At his wedding, the groom, wearing a white silk tuxedo inlaid with Swarovski jewels and designed by his bride Sion, hired a Cirque du Soleil trapeze artist to perform dangling from a helicopter as guests watched in awe from below.

Even along the stretch of Hillsboro Beach known as millionaire’s mile, where real-estate deals in excess of $10m are not uncommon, the property was a standout, boasting more than 450ft of Atlantic ocean beachfront and a further 500ft on the Intracoastal Waterway, including a double boat dock that can accommodate a 200-ft yacht.

No expense was spared during what became a seven-year project of refurbishment, upgrades and expansion. But at some stage Pereira decided that the cost, estimated at more than $100m, and partly funded by a $30m loan from Bank of America in 2013, was better spent preparing the property for sale instead of making it a home for his wife and young daughter.

It first went on the market for $139m, also then a record asking price, in September last year, then was de-listed earlier this year, according to project manager Joseph Leone, quoted in the Wall Street Journal, to allow more time for construction. Le Palais Royale went back on sale this week, the additional $20m justified by the inclusion of two smaller adjacent lots and guesthouses that will continue to be worked on until completion early next year. Pereira did not respond to a request for comment, but de la Vega, chief executive and founder One Sotheby’s International Realty of Miami, told the Guardian that “the owner” had begun the ambitious project with the clear intention of enjoying its fruits, rather than turning in an enormous profit.

So what changed his mind? Why would a man who ploughed a fortune into creating what was intended to be one of the most luxurious family homes on the planet not want to live there and enjoy its 4,500 square feet swimming pool with swim-up bar and water slide, the outdoor pizza kitchen, putting green, 1,300-gallon aquarium, six waterfalls and 1,300-bottle wine cellar?

“They’re just travelling a lot,” de la Vega said. And travelling in some style, as it turns out. Completion of the mansion comes hard on the heels of a multimillion dollar rebuild of the family’s super yacht Newvida, which recently emerged from 18 months in a West Palm Beach boatyard 21ft longer than it used to be at 185ft, and with a new name, My Seanna, after the Pereiras’ daughter. The rebuild, in the words of the marine journalist Kim Kavin, writing on YachtWorldCharters.com, amounted to “a total, no-holds-barred, you-have-to-see-it-to-believe-it rebuild”.

As if to match the opulence of the upgrades at Le Palais Royale, the yacht features a giant stateroom decorated extensively with gold leaf and Italian marble, a large Jacuzzi and under-the-stars move theatre. Back in Hillsboro Beach, meanwhile, town manager Robert Kellogg is keenly watching developments over the mansion described as “an over-inflated dream house” and “architecturally grotesque” by Variety.com.

Pereira’s property taxes are currently about $140,000 a year, a figure set to soar if the estate sells. “Let’s say it appraises for $150m,” he said. “The taxes just for the town will be $380,000, and for the school district and county it will be in the millions.” But Kellogg, who said he does not know whether to take his ice skates or bowling shoes when he finally inspects the property next month, remains sceptical of the asking price.

Last year’s most expensive real estate deal in Hillsboro Beach was the $17m sale of a nearby mansion. “It’s a very impressive property and if it sells it will obviously be to someone of enormous wealth, someone who loves entertaining, possibly even someone in the entertainment business,” he said.He added that most of the wealthy mansion owners in the town are part-time residents, so-called snowbirds who spent winters at their second homes in Florida when the weather is cold elsewhere, and who return to other residences during the near-unbearable heat of summer.

The town’s population of about 2,000 doubles every winter. The empty-mansion syndrome has led to problems in upmarket neighbouring cities in recent years, with a 23-year-old Brazilian squatter and eight friends living rent free at a vacant $2.5m waterside property in Boca Raton for two months in 2013 after breaking in. Before the group was eventually removed by police, Andre Barbosa even tried to claim ownership under Florida’s since-repealed “adverse possession” law that once allowed title of foreclosed, empty and abandoned property through occupation.

With staff maintaining Le Palais Royale in Periera’s absence, such a fate is unlikely to befall his mansion, and de la Vega said she has already received a serious inquiry from a potential buyer in Dubai, raising the possibility of an early sale of what she calls “a trophy property”. According to Dan Conn, chief executive of Christie’s real-estate brokerage in New York, a surge in the number of global billionaires in the last two years has fuelled demand in the luxury mansion market and driven prices ever higher.

“There is a new class of collectible, they’re trophies now,” Conn said in an April report that recorded the sale of five super mansions for more than $100m around the world in 2014.

“You’ve got this club of billionaires who just like to have unique assets. But it’s also, truthfully, that they like to entertain their friends and say, ‘This is mine.’”

• This article was amended on 17 November 2015 to correct the name of the website where an article by Kim Kavin appeared.