The ultimate sailing pleasure: More than 360 exhibitors in the sailing section of the boot 2017. 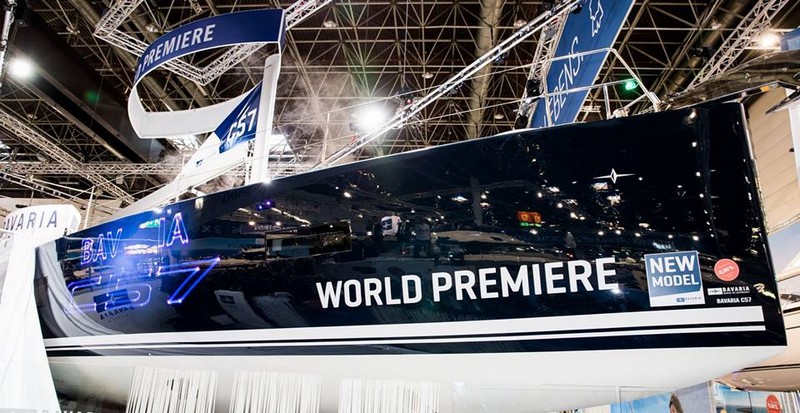 More than 360 manufacturers of sailing boats and yachts, multihulls, catamarans, day sailers and dinghies are presenting their novelties at boot Düsseldorf from 21. to 29. January 2017. Halls 14 to 17 were transformed into an enormous sailing centre.

Test sailing at the boot Sailing School:
Support for sailing is a further emphasis at boot alongside presentation of the boots in the halls. Among other things, the trade fair sponsors the traditional regattas in Kiel and Travemünde, for example. Every year, the boot sailing school attracts hundreds of newcomers to the water in Hall 14, where huge wind machines make sure there is a good breeze. The 4,000th budding sailor in total was welcomed there at boot 2016.

The new Oyster 675, the largest sailing yacht to be seen at the boot 2017, expands the portfolio of Oyster Yachts with another inspiring luxury yacht.
Oyster believes that no other yacht builder has the combination of large numbers of its yachts circumnavigating with just the owners and friends on board and more than 35 ‘Superyachts’ built over 24 metres – the majority of whom traded up from Oyster previous ‘baby-superyachts’ – below 60ft for example the Oyster 56, launched in 1998 and of which 75 were built. 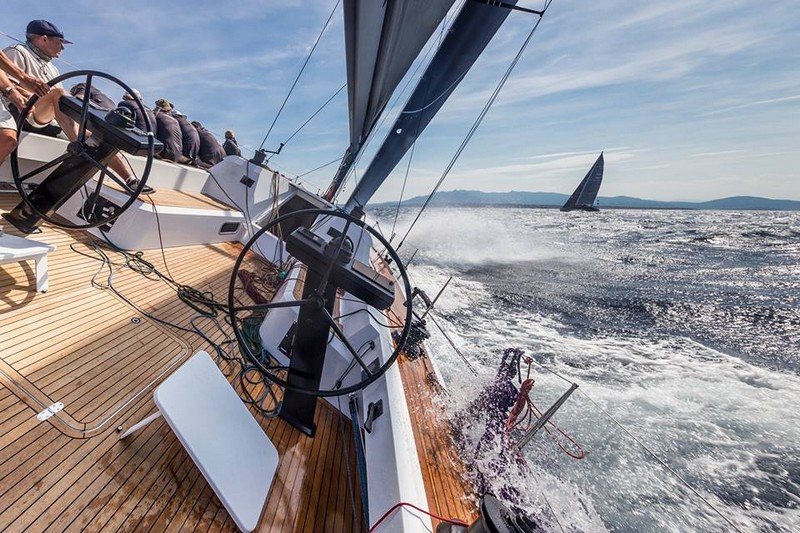 ClubSwan 50 is a a yacht that combines performance racing and pure pleasure sailing. The ClubSwan 50, was conceived to officially celebrate Nautor’s 50th anniversary.

World premiere at the boot 2017: Modern improvements to traditional Swedish boat building are intended to make sailing the new Hallberg-Rassy 44 even more enjoyable.

Tradition has it that the cockpit of any Hallberg-Rassy sailing yacht is a secure and sheltered place. This is also true for the new Hallberg-Rassy 44. Overall, the Cockpit is 2.29 m long, which provides even 19 cm more space in the cockpit than on the HR 43 Mk III. The pedestal at the helm station has ample room for a large, built in modern chart plotter with a multi- functional display as well as all the controlls for electric furling systems and winches. “Sailing at your fingertips, so to say.” 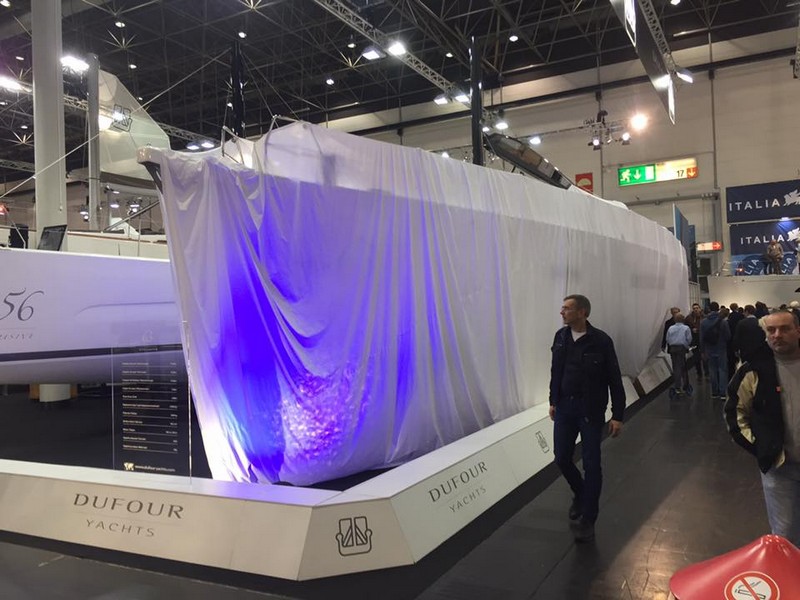 This exclusive 63-foot sailing yacht is the new flagship of the French shipyard Dufour Yachts. For the first time the design team of the La Rochelle-based shipyard ventured into the design of a sailing yacht of these dimensions. And, of course, the team set out to meet the challenge of delivering an equally innovative design and concept in this new yacht segment for Dufour as they have already achieved in the previous models of smaller size.

“This magnificent 60-foot yacht offers all the comfort of luxury equipment, combined with innovative cutting-edge functionalities. Never before has cruising been so synonymous with pleasure and relaxation,” says the shipyard. 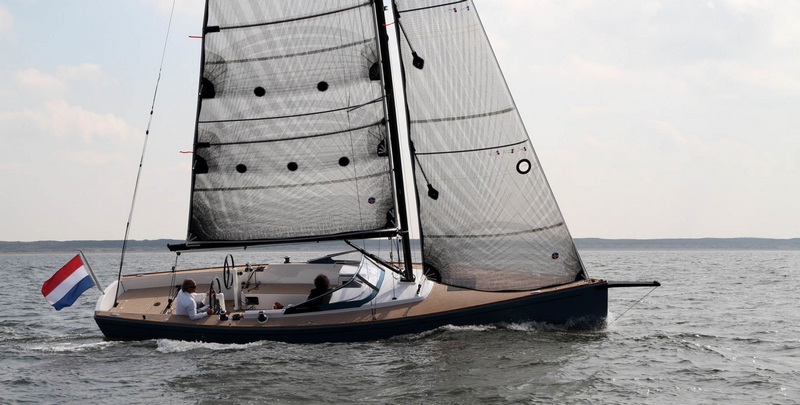 The Saffier Se 33 UD is designed as a daysailer with extraordinary sailing potential in combination with a luxury feeling of sailing.

The Saffier Se 33 UD can be sailed by the helmsmen alone without difficulties. The mainsail, the self-tacking jib and the code- zero or gennaker as well as all sheets and halyards, which run underdeck into the cockpit, can be operated at the winch stationbs while staying behind the helm. All lines can be operated manually or with electrical winch. The cockpit layout, which has room for 10 persons, is designed to allow the aft deck to be used as a sunbathing platform.

With this new yacht the first collaboration between Contest Yachts and leading design studio judel/vrolijk, the Contest 67CS introduces a new, even sleeker dynamic to the Dutch builder’s trademark flush decks and low deckhouse with browed and swept wraparound glazing, while creating even greater interior space. 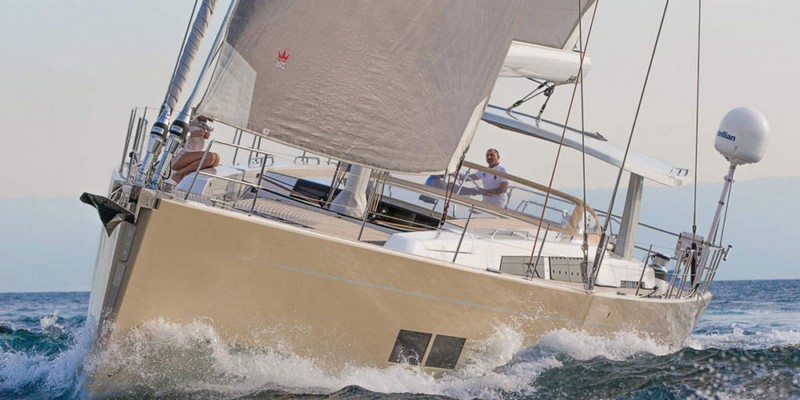 World Premiere at 2017 boot: Hanse 675 by Hanse Yachts – the Biggest Hanse Yacht of all Times

The Hanse 675 not only breaks the record of the biggest ship Hanse Yachts ever built, it is also Germany’s largest serial sailing yacht.

Following the first announcement of the project at the boot Düsseldorf three years ago, Hanse Yachts is welcoming 2017 with the first presentation of the finished yacht. Following in the footsteps of the successful Hanse 575, the new Hanse 675 once more expands Hanse Yachts’ fleet at the top end.

“Our new queen of the seas embodies the Hanse design philosophy of sensual clarity and modern luxury with emotionality and high-tech, still more avant-garde in the interior and with flowing lines on the exterior. A milestone in the production of standard yachts,” says Dr. Jens Gerhardt, CEO of HanseYachts AG.

The Hanse 675 is also designed to combine extremely good sailing characteristics with lots of space below deck. The Hanse 675 will be taking the place of the successful Hanse 630e, which is the most successful yacht in the 60 – 70 foot class to date with over 60 boats sold. The new Hanse 675 has a 30% larger interior volume compared with the 630e and offers a whole host of exciting new features. 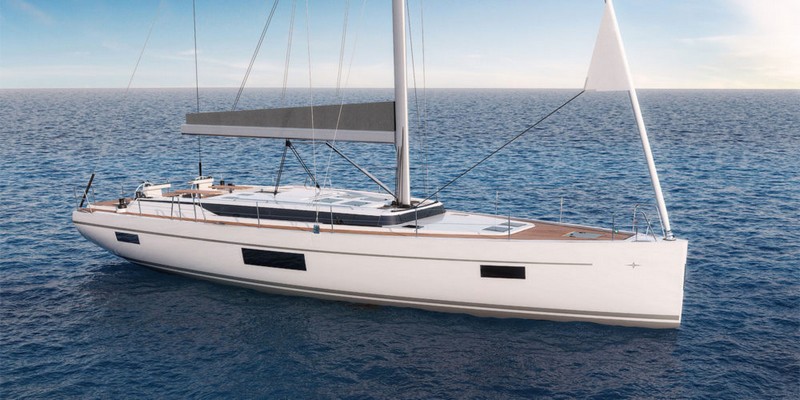 The new flagship from Giebelstadt, Bavaria.

BAVARIA YACHTS presents a new revolutionary sailing yacht, in the form of the new BAVARIA C57, at the boot 2017.

The two control stations offer perfect views of the BAVARIA C57. The sails can be trimmed directly by the helmsman, using the four large winches on the steering column. The steering of the BAVARIA C57 is therefore not only extremely easy, but can also be managed by small crews.Crew and guests can enjoy a day’s sailing at the cockpit table, which can be lowered if desired, turning the cockpit into a lounge area. Two additional large relaxation areas can be found on the cockpit roof and on the bow. 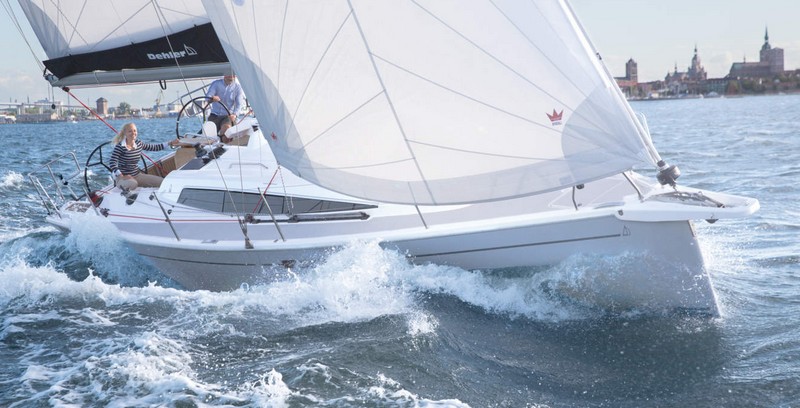 It is actually the third world premiere of the Dehler 34 following the classic’s first presentation in 1982 and the first relaunch that followed in 2002. Within the category performance cruiser, the intention was to design a performance-oriented sailboat that is competitive on the racecourse, laid out for vacation cruises as well as ideally suited for pleasant day sails. 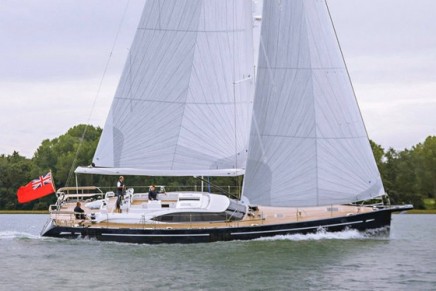 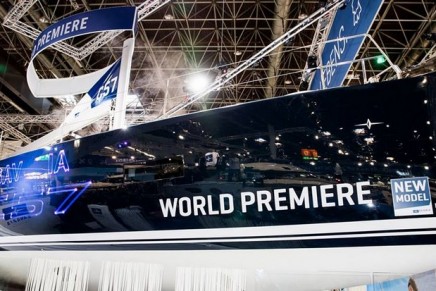 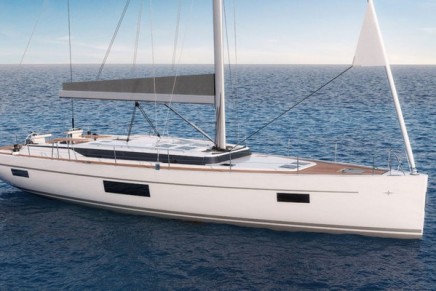 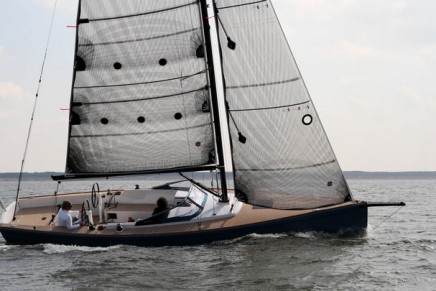 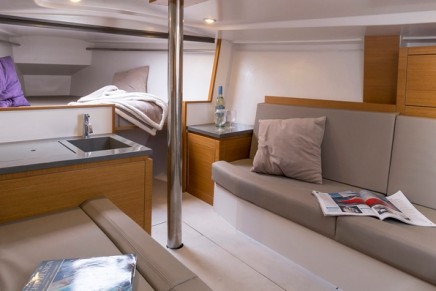 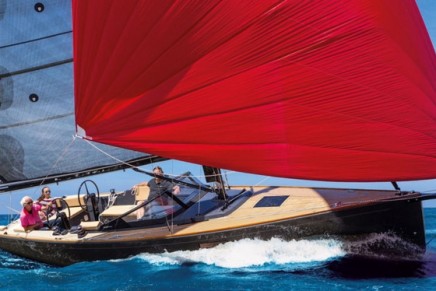 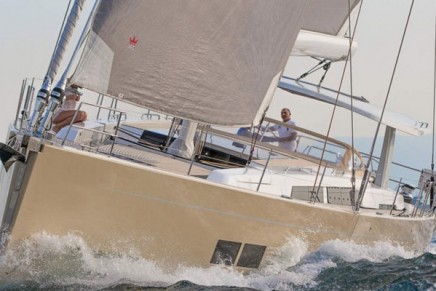 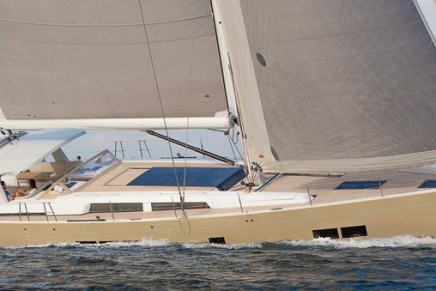 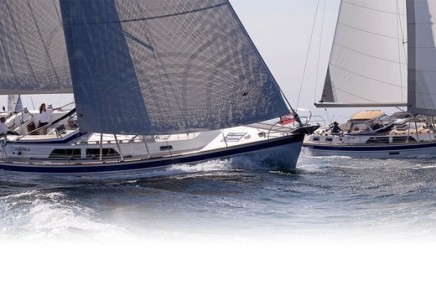 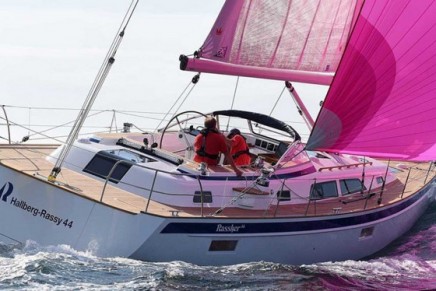 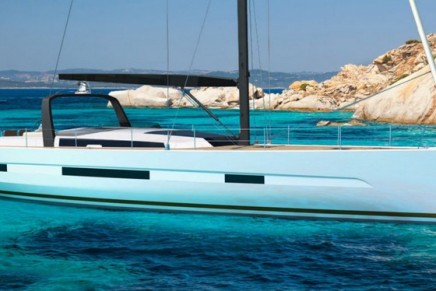 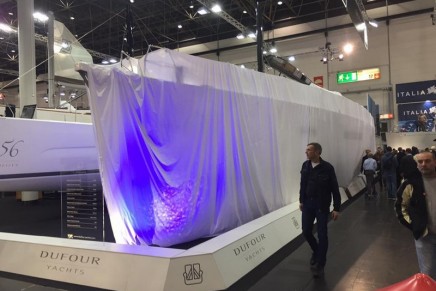 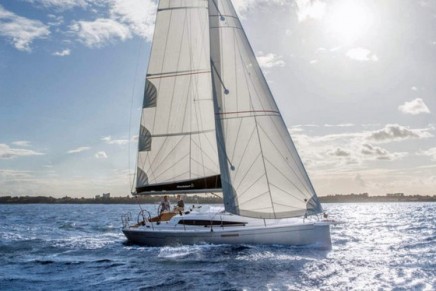 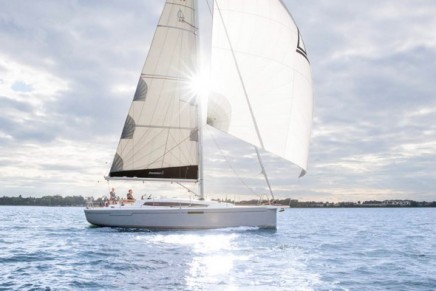 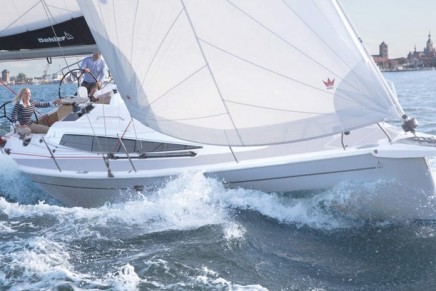 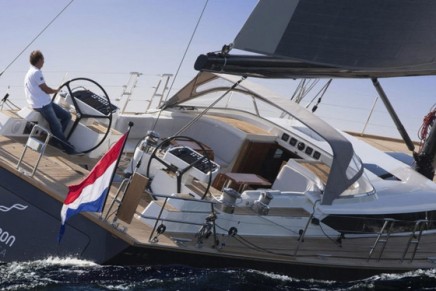 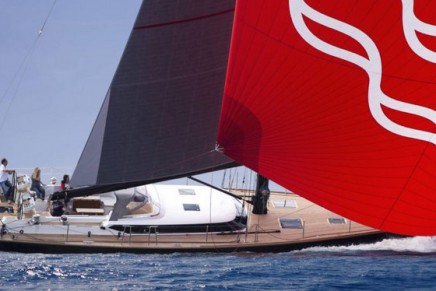 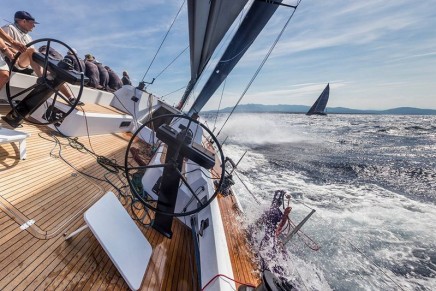