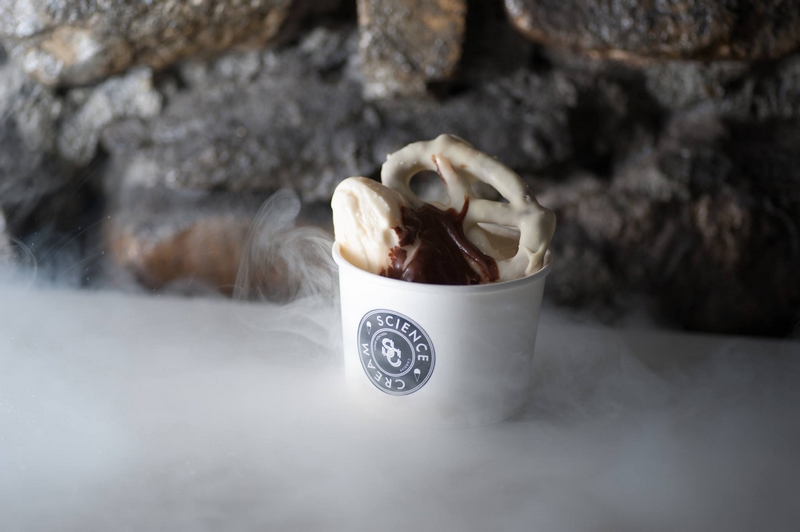 This article titled “Ice-cream parlours are booming – and it’s not only because of Instagram and teetotalism” was written by Tony Naylor, for The Guardian on Wednesday 9th May 2018 12.05 UTC

Built in the Victorian era and now a sedate enclave of independent cafes and shops, Cardiff’s Castle Arcade does not look like a crucible of radical innovation. Enter Science Cream, however, and you step into a world of Heston Blumenthal-style theatre. Stood behind a Perspex screen, dressed in white lab coats and protective goggles, this ice-cream parlour’s “laboratrists” use great billowing flasks of liquid nitrogen to instantly freeze what is – thanks to LN2 creating such tiny ice-crystals – some of the smoothest, most thickly luxurious ice-cream you will ever taste.

It is a spectacle at which, not just children, but even the most cynical adults cannot help but marvel. “Today, it’s all about doing what Amazon can’t and giving customers an experience,” says the owner, Carly Karran, who is hunting for a second site in Bristol. “We’re already nostalgic about ice-cream, it brings people joy, but throw in the liquid nitrogen vapour and it’s a double-whammy, a very Instagrammable one. It ticks all the boxes.”

With its freshly blowtorched marshmallows, homemade honeycomb and use of all-natural ingredients (to ensure clear, intense flavours), Science Cream is a high-end parlour. Two scoops of its sea salt and burned caramel or black charcoal coconut ice-cream will cost you up to £5. But this hip store is also an example of a wider surge in the popularity of ice-cream parlours and dessert bars. A surge that, powered by fast-expanding national chains such as Kaspa’s and Creams, is bucking high street trends.

Last month, having analysed 67,157 premises in 500 town centres, PricewaterhouseCooper reported that, with nail bars, book stores, coffee shops and craft beer bars, ice-cream parlours are one of a handful of growing sectors. Overall, the high street is shrinking. For every 11 new high-street units, 16 close. Yet the number of ice-cream parlours, historically seen as a seasonal seaside concept, rose by 20% last year.

If you are over 25, you may well never have heard of Creams, but this urban dessert bar chain (which serves hot pudding and waffles too, making it a go-to even in winter), has opened 70 sites in the past seven years and is aiming for 300 by 2022. A franchise operation, it is big enough that, until recently, it had former Nando’s regional director Handley Amos as its CEO, yet is relatively circumspect in its marketing. Aside from select associations with, for instance, Thorpe Park amusement park, it has grown (140,000 Facebook and 15,000 Instagram followers), largely via social media chatter.

“We’re plugged into that,” says Ginger’s owner, Claire Kelsey, whose £3.30-a-scoop flavours run from her legendary Chorlton Crack (salted caramel and peanut butter), to apple, mint and wheatgrass. Kelsey also makes several vegan ice-creams using oat milk and coconut oil. “We get loads of people coming in showing us their phones and saying, ‘Can I have that?’ We put weird flavours on our ice-cream van, and that’s what people want after seeing it on Twitter. There’s a lot of adventurous palates.”

At the level of Science Cream and Ginger, margins are tight. They are producing small volumes and using expensive ingredients that need labour-intensive preparation and cooking. But mainstream dessert bars can be very lean, nimble businesses. At Creams, all its gelato (a lower-fat Italian version of ice-cream, made with more milk and less cream) is manufactured at a central production facility. Its cakes are bought-in. No chefs are needed. There’s no big kitchen investment. Throw in its counter-ordering and the fast turnover of customers and, even though the average spend at Creams is only £8 (two scoops of ice-cream for £3.95; most of its sundaes are £6–£8), it is a potentially lucrative business.

“These dessert bar formats are absolutely outpacing the growth of normal restaurants,” says Joe Lutrario, deputy editor at Restaurant magazine. “Waffles, coffee, cake, ice-cream, it’s all serious money-making stuff and you only need a few staff to serve it. It’s a different, more profitable model and you can have an experience there for six quid, which is dramatically cheaper than somewhere like Nando’s.”

Sat in Creams’ Stockport branch – a contemporary diner decorated with street art-bedecked skateboards, music pumping away in the background – it is easy to understand its appeal. It feels just cool enough to impress pickier teens without alienating anyone, including their parents. The unusually cheery staff make it welcoming, and my five-year-old is entranced by the gelato display.

That product itself is Ben & Jerry’s quality (a compliment!), and if a sample crepe feels a little sad and flabby, a cookie-dough crush sundae, topped with Mr Whippy-style ice-cream, caramel sauce and cookie dough crumb, is wolfed down. The kid’s blue bubblegum ice-cream is vile, obviously, but it does mimic that “screwball” flavour with eerie accuracy. None of this is cheap. Three of us are in and out in half-an-hour, £20 lighter. But the young couples in the neighbouring booths are in no hurry. You could stretch a tenner out here over an hour or so, which people seem to be doing more and more. For the ice-cream parlour’s rise is not solely a story about changing trends in ice-cream consumption (we are eating less ice-cream, but opting for better-quality options when we do indulge), but also a cultural shift in how we socialise.

Founded in 2004 in Walthamstow, east London, Afters Original was one of the capital’s first dessert bar chains. It now has 10 sites. It opened, in no small part, to give young Muslims and families somewhere to hang out, locally. Its venues (garishly pink, US-inspired diners decorated with giant jukeboxes and even the occasional Chevrolet) are all alcohol-free, as is Creams, and open until late (1am in some cases), serving a global menu ranging from Mississippi mud pie to malai kulfi. “The Muslim community or people who don’t drink had limited places to go socially, and it can get boring going to the cinema every week,” says the owner, Kais Niaz. “This was kind of a replacement. Also, a lot of the old, traditional east London ice-cream parlours had closed. We created this buzz about dessert.”

That buzz has now gained a national traction. Creams’ Adam Mani argues that a broad swathe of millennials, many non-drinkers or infrequent drinkers, are looking beyond the pub or coffee shop (“that’s an older generation”) for places to meet: “Youngsters don’t necessarily want to be in environments with alcohol, and families feel safer sending their kids to a place where they can have an ice-cream. We try to accommodate every ethnicity, dietary restriction and taste. I think that’s worked well in the sense that people’s social and cultural sensitivities are unconsciously accommodated.”

Anecdotally, women are using dessert bars a lot, too; both dry ones and those that serve booze. “It’s very female-led,” says Anthony Quinn, owner of Nottingham’s The Pudding Pantry. “Often, you look around and there’s not a single male. It’s an alternative to a bar. Come here and have a prosecco and some puddings.”

All this sounds like a future-proofed demographic – young, multi-ethnic, female – that big corporations such as Unilever, owner of Ben & Jerry’s and Carte D’or, must be desperate to connect with. But Unilever shows little sign of entering this high-street parlour game. Its Ben & Jerry “scoop shops” are almost entirely in cinemas. Such “dinosaurs” are poor, argues Mani, at adapting to youth trends: “London is a phenomenal melting pot of ideas and cultures and a lot of bureaucratic institutions don’t tap into that knowledge.”

Could concerns about obesity and the growth of healthier diets be an existential threat to this boom? “I don’t feel threatened,” says Kelsey. “There’s so much noise around those issues, but most sensible people know you can’t live on ice-cream.”

Niaz, whose Afters venues literally have their cake and eat it by also serving sorbets and healthier smoothies with names such as “flu-fighter”, sounds equally unconcerned: “It’s been designed as a treat, not an everyday meal. It’s not cheap-cheap. It’s a luxury.”

In a global context, it is a luxury that still offers plenty to explore. A new development in London’s Chinatown, Central Cross, is home to several east-Asian dessert bar brands, such Guo C 100 and Roro, that serve durian milk puddings and Cantonese mango pancakes rarely seen in the UK. Someone from Creams, which already sells Hong Kong-style “bubble-pop” waffle cones, is probably there, right now, eating hard in the name of research. The future? It looks very sweet.