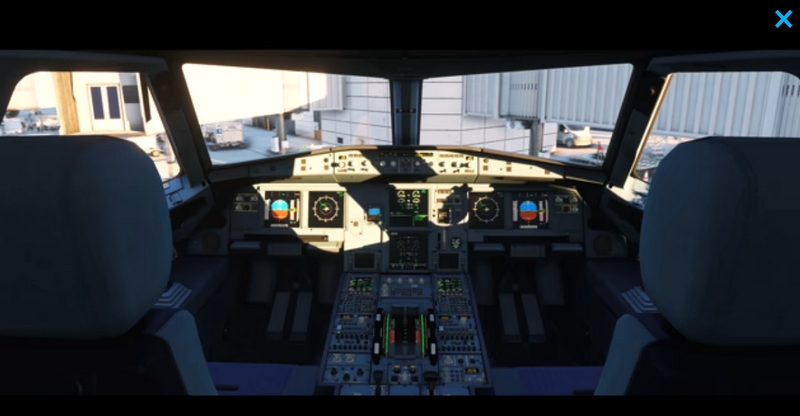 This article titled “Head in the cloud(s): the return of Microsoft Flight Simulator” was written by Matt Kamen, for theguardian.com on Wednesday 24th July 2019 09.00 UTC

Flight Simulator was once one of the jewels in Microsoft’s crown, as close to synonymous with PC gaming as it’s possible to get. The series debuted a staggering 37 years ago, pre-dating even Windows as an operating system, and demanded exacting attention from players as they guided increasingly detailed planes safely through the skies. Over the course of a dozen iterations spanning nearly four decades, the flying experience evolved from blocky cockpit views to full aerial tours with a hangar’s worth of realistically modelled aircraft to get to grips with. It’s been running so long that even Microsoft does not know its sales figures, but Flight Simulator has certainly been played by millions.

Yet as PC gaming blossomed, becoming home to everything from competitive shooters to arthouse narrative games, Flight Simulator’s star began to wane. The last major release was 2006’s Microsoft Flight Simulator X (eventually revamped and repackaged for Steam in 2014), while 2012’s simplified spin-off, Microsoft Flight, had an aborted take off, cancelled a mere five months after launch. The golden age of flight (simulators) has long been over.

Until, that is, this year’s E3 in Los Angeles, where a brand new Microsoft Flight Simulator made a surprise appearance. It was announced during the Xbox conference, for Xbox consoles as well as its more familiar PC home. The franchise’s shock reappearance was very well-received, but even Microsoft’s head of Xbox Phil Spencer wasn’t confident about debuting a flight sim alongside the likes of Gears of War and Forza.

“I remember we were going through the planning, and I was like, ‘could we really get Flight Sim on our stage?’,” Spencer says. “I thought for sure, there’s just no way. But then we saw the visuals.”

As the trailer above demonstrates, the new Flight Simulator looks absolutely astounding. Real-world locations including Dubai, San Francisco, and Egypt are recreated in photorealistic 4K resolution, with geography and textures captured from satellite imagery. Players will be able to control numerous authentic planes from light aircrafts to passenger vehicles, set their own flight paths, and navigate through unpredictable scenarios thrown up by Microsoft’s Azure cloud computing platform, which leverages artificial intelligence and machine learning to dynamically shift flight conditions. This will keep players on their toes – get too comfortable running a commuter flight, and Azure might throw up sudden shifts in the weather, turning a sunny flight into a battle to keep aloft as storm conditions roll in.

Spencer first saw footage of Flight Simulator in “probably February or March”, and was so taken aback that he had to confirm with Microsoft’s studios head Shannon Loftis that it was actually real. “There were scenes that look better than photorealistic,” he recalls.

If Flight Simulator looks ahead of its time, that’s because, in many ways, it is. Not only do the underlying AI and graphical technologies behind its creation push current gaming technology to its limits, but they begin to surpass them. The geographic data alone, needed to render the world players will be flying around, comes in at two petabytes – equivalent to 20,000 Blu-ray discs.

It will be far in excess of what can fit on a disc or be reasonably downloaded, and so Flight Simulator is at the vanguard of a new breed of game that can only live, perhaps fittingly, in the cloud. Microsoft servers will do a lot of the visual processing remotely and beam the results to a player’s screen, doing away with the need for a super-powerful PC at home (though you will need a fast internet connection). This is part of a wider shift that is already under way in video games: as technology improves and developers strive to create ever more realistic virtual worlds, games balloon in size, and the hardware needed to run them becomes more and more expensive. Offloading some of that data and processing to cloud servers is the solution that Microsoft – among other companies, such as Google – is betting on.

For games like Flight Simulator, the cloud provides “a system that kind of understands how much capability I need at any point,” Spencer explains. “It’s no different than what we’ve done in years past, streaming into available RAM that’s available on our consoles.” Flight Simulator will have an offline mode when it launches in 2020, but given how heavily it relies on data streamed from Microsoft servers, it’s likely to be severely truncated.

Always-online games are sometimes controversial – not everyone likes logging into a server every time they want to play (and indeed, some players aren’t able to). But in this case, the advantages are surely worth it. “We’re getting to the point with games where there’s the [question of] how much data can you actually download and store?” says Spencer. “[But] there’s also the matter of how much data do I need to have locally at any time? I’m not playing the beginning, middle and end of every game at every time … Not only do we have two petabytes of data behind [Flight Simulator], but we’ve got Azure AI running [so] you have different levels of fidelity in different parts of the planet. As you’re flying around, you’re seeing the highest buildings and the weather’s changing in real time. It is just unreal.”

Ahead of Flight Simulator’s release in 2020, Microsoft has launched an Insider program, to share development updates with players and provide early access to the game in return for feedback from early adopters. Flight Simulator’s approaching return will be watched closely by its many passionate fans – but if Microsoft can stick the landing, this will be a game beyond the wildest dreams of anyone who played in the 80s and 90s.