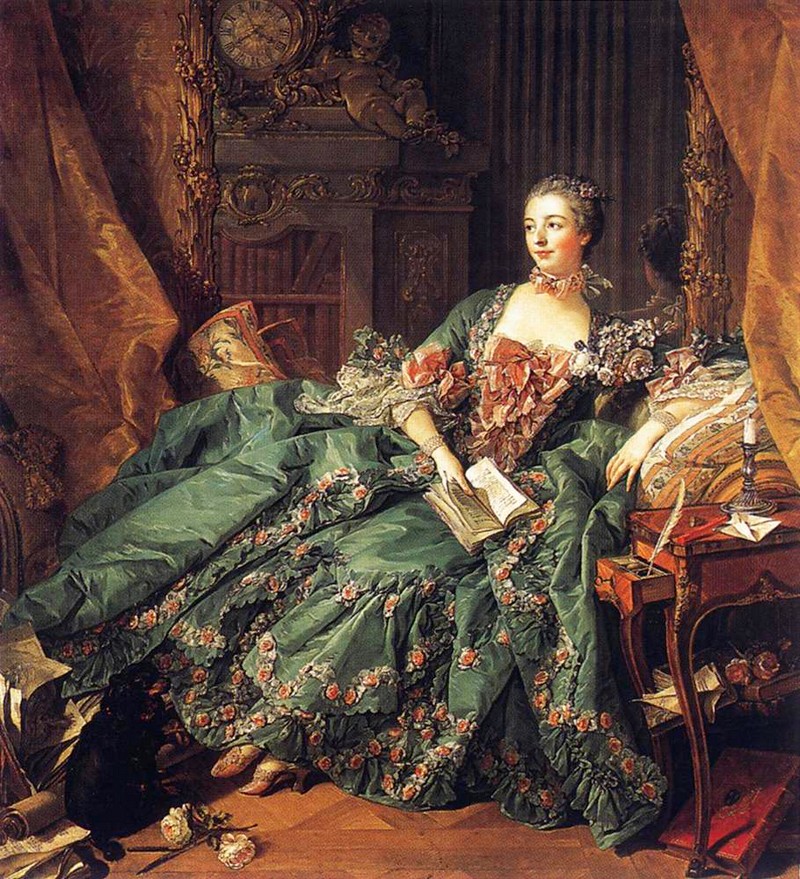 This article titled “From baroque to bling: how France became king of high style” was written by Amanda Vickery, for The Guardian on Friday 4th December 2015 12.00 UTC

After the Renaissance and before the dictators lies a long stretch of European history untouched by the national curriculum. The Victoria and Albert Museum’s market research revealed that most people know little about the period, its personalities or even its events, with the exception of the French Revolution.

Yet the 16th, 17th and 18th centuries were hardly uneventful in Europe. The continent withstood dizzying bloodshed, Reformation and Counter-Reformation, wars of religion, inquisitions, witch-craze, plague and famine, the rise and fall of dynasties, the materialisation of nation states, an explosion of global trade, colonialism, scientific revolution, the Enlightenment, the emergence of manufacturing powers, the establishment of the fashion cycle and the flowering of consumer societies. And Europe was no monolithic entity. It stretched from Ireland to the Urals, from Iceland to the Azores, from Scotland to the Ottoman lands.

The V&A’s newly redesigned Europe 1600-1815 galleries aim to capture a flavour of that diversity and change in more than a thousand high-design objects. By the time visitors leave the museum, the lead curator Lesley Miller promises, they “will have encountered the likenesses of Madame de Montespan, Madame de Pompadour, Marie Antoinette, Peter the Great and Jean-Paul Marat, the work of artists and designers working in Dresden, Lisbon, Paris, Rome and St Petersburg, the major styles of the era, and the major conflicts that reconfigured Europe.”

The intellectual blueprint is shaped by three aims. First, to showcase the rise of France as international leader in luxury goods. Second, to uncover the roots of a recognisably modern lifestyle, from seasonal fashion and the comparative democratisation of luxury to ideals of domestic comfort and intimacy, the structure of meals and new rituals such as taking tea, coffee and chocolate. And third, to lay bare the extent to which Europe was entwined with the rest of the world, systematically exploiting resources from colonised continents, as well as designs from distant empires.

The overarching narrative is the decline of Italy as the leading producer of luxury and the rise and reign of France as European superpower and fashion leader. French supremacy in exquisite manufactures in the 17th and 18th century is undisputed, so the gallery’s argument holds water; it is serendipitous that the great bulk of the V&A’s European collection is French. The museum’s holdings reflect a major donation from the Victorian collector John Jones (who made his money as a tailor in the Crimean war), as well as historic acquisition priorities. French furniture was especially revered by 19th- and early 20th-century connoisseurs.

Visitors can also wander off the narrative path and linger in immersive galleries, a cabinet of curiosities, a Venetian masquerade experience, a restful wooden structure evoking the Enlightenment, or listen to extracts from Casanova’s memoirs or Charles Perrault’s Cinderella.

Starting with a blank slate, one might map the cultural and design history of Europe with more Spanish, Portuguese, Belgian, Dutch, Swedish, Russian, Ottoman and British goods, and include Asian imports, scientific instruments and natural curiosities as well as luxury goods. However, the raison d’etre of the V&A’s primary galleries is to showcase the holdings, not loans, and the museum is not in the business of replicating what can be seen elsewhere – across the road at the Science Museum and Natural History Museum, or in other V&A displays such as the British or South Asian galleries.

Art historians might quibble with the use of stylistic terms that were not in use at the time, such as baroque, rococo and neoclassical, but they are vital building blocks for the uninitiated. The design of the galleries aims to orient the visitor, so our promenade opens in a sumptuous purple hall with Catholic Italy and the baroque, then on to Bourbon blue for French pre-eminence, lighter apple green for the playful rococo and cooler grey for the classical revival.

Leadership in fashion and dominion over territory do not inevitably march hand in hand. Though Counter-Reformation Rome might have led taste in 1600, it was Spain, France and the Islamic Ottoman empire that battled for European domination. Spain was the first global superpower, but through the 17th century its European territories were shorn by the Dutch revolt (1568-1648) and the thirty years’ war (1618-48), its once invincible armies defeated by Dutch and Swedish military techniques, and its coffers depleted by the dwindling returns of South American mines. Seville lost out to the bustling ports and merchant marines of the north. Amsterdam displaced Antwerp as Europe’s global entrepot. Britannia seized control of the waves from the Dutch in the 18th century, but one dominant military, economic and cultural power emerged in the 17th century: France.

From the early 1660s, Louis XIV mobilised France’s enormous reserves of wealth and people – with 12 million people, France was by far the most populous state in Europe; England had only 5 million – behind a large and ultra-efficient army and a programme of territorial aggrandisement inspired by a self-confident and aggressive Roman Catholicism. Absolute monarchy as epitomised by the Sun King was seen as the most modern form of government, and a model across the continent. As Frederick the Great of Prussia later observed of European royalty, “There is not one of them, down to the youngest son … who does not preen himself on some resemblance to Louis XIV: he builds his Versailles; he has his mistresses; he maintains his standing armies.” The Hapsburgs built Schönbrunn Palace, Frederick his Sanssouci, and Catherine the Great her summer palace, Tsarskoe Selo.

Louis’s grandeur was built on a mercantilist economic policy and a deliberate campaign to establish competitive industries. “Trading companies are the armies of the king,” bragged his chief minister, Jean-Baptiste Colbert, “and the manufactures of France are his reserves.” State initiatives, the release of big cloth merchants from guild regulations and several hundred Manufactures Royales established Paris as the metropolis of European luxury production. With its immense capacity for courtiers, Versailles was a great showcase for French interior decoration, fine art, landscape, design, dress, deportment and manners that set the benchmark for other European courts and rich elites. “Today we want everything to be French. French clothes, French dishes, French furniture,” wrote the German lawyer and philosopher Christian Thomasius in 1683.

The reign of the Sun King was the apogee of “the French century”, but by the turn of 18th century the sun was in the descendant. The French military machine was worn down in a series of wars by the combined finances of Amsterdam and London, the superiority of British and Dutch fleets, and the harrying armies of the Protestant German princes. Meanwhile, the growing manufacturing capacity and commercial reach of Les Rosbifs was beginning to tell.

Paris was deplored as the headquarters of paint, powder and silks, but it set trends across Europe

Yet the artistic supremacy established by Louis XIV endured. “French glass attained a splendour and beauty which have never been surpassed elsewhere,” celebrated Voltaire, “… the carpets of Turkey and Persia were excelled at Savonnerie. The tapestries of Flanders yielded to those of Les Gobelins.” Paris remained the undisputed epicentre of European fashion. And fashion is not trivial. “Fashion is to France what the gold mines of Peru are to Spain,” was the opinion of the austere Colbert.

Despite being almost constantly at war with France throughout the 18th century, the British still sighed after the exquisite sophistications of the enemy. Paris may have been deplored as the headquarters of affectation, effeminacy and vanity – “or paint, patches, powder, silks, diamonds and flirting airs”, as the manufacturer Matthew Boulton espied in the Tuilleries in 1763 – but the French luxury trades still set trends for all the other European nations, Protestant, Catholic and Orthodox alike.

Conspicuous consumption and conspicuous taste remained signifiers of nobility across the continent. “My pleasure is not to contemplate the gold in my coffers but to spend it,” trilled royal mistress Madame de Pompadour in 1748. A particularly lavish example of conspicuous luxury is the Meissen porcelain table fountain belonging to Count Brühl, appointed prime minister of Saxony in 1746. It ran with rose water, stunning the British ambassador: “I thought it was the most wonderful thing I ever beheld. I fancy’d myself either in a garden or at the opera.”

Nevertheless, France is not Europe. Indigenous design traditions further afield are signalled by splendid objects in the galleries. One of the most magnificent is actually made of base metal – a shimmering fireplace created in Tula in Russia from Swedish steel. The continued artistic reach of the Catholic church, especially in its global guise spread by the Jesuits, is reflected in an ivory carving of Christ as the Good Shepherd from Goa. Protestant Europe is rather submerged beneath the glitter, though a modestly beautiful linen cabinet hums with the pride of Dutch housewifery, and Scandinavian and German wood carvings bespeak vernacular craft traditions.

European expropriation of the world’s resources is implicit in the materials from which luxury objects were crafted – tropical tulipwood and mahogany, Mexican silver, as well as ivory, mother of pearl and tortoiseshell from Africa and Asia. The Atlantic slave trade is highlighted here and there. The role played by African children as “human luxuries” is patent in dynastic portraits, while a supremely smug Sèvres porcelain ornament from 1794 commemorates the anti-slavery campaigns: “La Nature” as a European woman with six breasts suckles two babies, one European, the other African.

Masculine swagger is to the fore throughout, flourishing rank, enjoying the technical innovations of warfare and weaponry, but also in superb personal adornment. Women appear as housewives, mistresses, queens and pieces of property, as retailers, consumers and, to a lesser extent, craftswomen, though I spotted one prestige object by a female maker – a Dutch still life of a spray of flowers by Rachel Ruysch, flower painting being one of the few, unthreatening genres in which female painters were mildly encouraged.

Ultimately art and design still followed money and power. One breathless master craftsman panted to Napoleon Bonaparte in 1804: “Already en route, artists are only awaiting an order from their sovereign to march and serve him as an escort on the road to glory, and transmit his glory to the coming centuries.” The gallery ends when French imperial ambitions met their Waterloo.

• Amanda Vickery is professor of early modern history at Queen Mary University of London. The Europe 1600-1815 galleries open at the V&A, London SW7, on 9 December. vam.ac.uk.