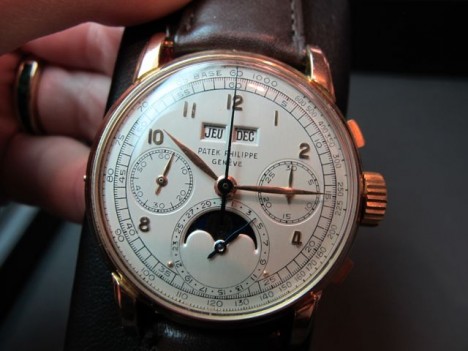 The highly important platinum perpetual calendar chronograph reference 2499/100 from the collection of Eric Clapton is expected to fetch over $4 million at Christie’s Geneva Auction on November 12 at the Four Seasons hotel in Geneva.

Featuring some 310 lots, Christie’s Geneva auction of important watches on November 12 is estimated to realise a total of more than  US$16 million. Two other extraordinary and historically important platinum Patek Philippe masterpieces will go under hummer. These include a unique platinum wristwatch, ref. 2458, specially made in 1952 for the legendary collector J.B. Champion (estimate: SFr.2,000,000-4,000,000), and the superb platinum chronograph wristwatch, ref. 1579, manufactured in 1946 (estimate: SFr.1,000,000-1,500,000).

“Over the past thirty years a combined total of over two million collector’s watches have changed hands via the international salerooms, leading the worldwide community of scholars, collectors, specialists, museum curators and dealers to form, in an official / unofficial way, a list of the ten most significant wristwatches, in their opinion. To make it onto this `all-star list’ a wristwatch has to standout by its historical importance, mechanical complexity, unmatched beauty, original condition, incredible rarity and superior provenance,” explained Aurel Bacs, International Head of Christie’s Watch Department.

“This autumn we are proud to offer for sale examples which deserve to be placed on that list. These include three extraordinary Patek Philippe platinum wristwatches: the world famous `J.B. Champion’ special order platinum observatory wristwatch, the platinum chronograph wristwatch reference 1579, one of three platinum examples ever made, and the highly important platinum perpetual calendar chronograph reference 2499/100 from the collection of Eric Clapton,” added the Head of Christie’s Watch Department.

The three top lots from Christie’s Geneva auction of important watches are to be considered to rank amongst the top ten list of platinum Patek Philippe wristwatches to have remained in private hands.