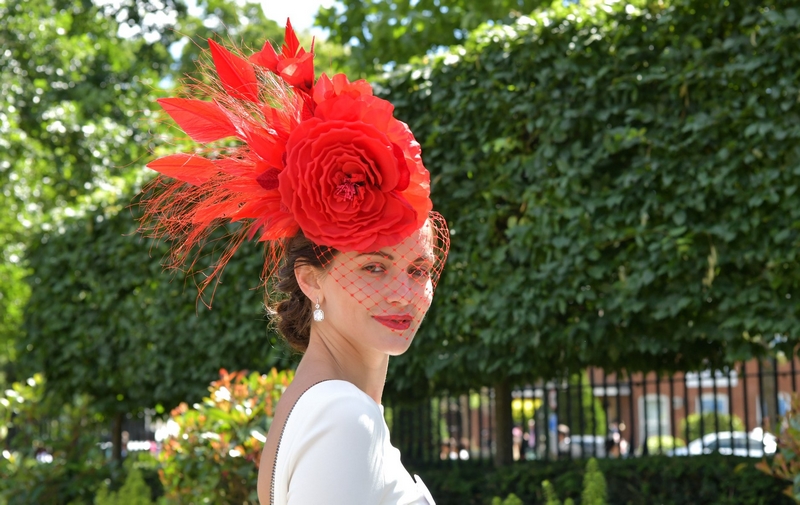 This article titled “Does a woman with a bath puff in her hair spell the end of the fascinator?” was written by Laura Barton, for The Guardian on Tuesday 26th June 2018 15.30 UTC

It is, at present, hard to know whether the actions of Lillian Smith herald the end of the fascinator or its joyful and irreverent rebirth.

Smith, from Preston, was recently featured in an issue of Take a Break magazine divulging her top fashion tip for the summer party season: exasperated by her search for the perfect fascinator, Smith found a bath puff in her desired shade of blue, then simply attached it to a hair clip and partied on. Hey presto.

If not always an entirely serious business, the fascinator has at least a more dignified heritage than Smith’s improvisation might suggest. The headwear that Vanity Fair recently termed “the haiku of hats” emerged in its contemporary form in the 1990s – an evolution of sorts from the doll hats of the 1930s and the cocktail hats of the 1960s.

For formal occasions, it offered a more witty and less cumbersome alternative to a full-brimmed hat, and its popularity has yet to wane – this year, fascinators once again made an appearance on the spring/summer catwalks – including Christian Dior and Maison Margiela.

The fascinator’s success has been aided and abetted by the milliners Philip Treacy and Stephen Jones, who, for several decades, devoted themselves to devising new and wonderful confections – clouds of butterflies, plastic doll legs, on one occasion, a bacon sandwich.

Isabella Blow, for many years Treacy’s muse, was known for her outlandish taste in fascinators: one time, a whole lobster; another, her name written in feathers. Blow said the flamboyant creations allowed her to keep strangers at bay: “I don’t want to be kissed by all and sundry,” she said. “I want to be kissed by the people I love.”

Treacy was also responsible for the fascinator worn by Princess Beatrice to the wedding of Prince William and Kate Middleton – a startling piece of engineering that earned comparisons to a lavatory seat. The princess later auctioned it on eBay, earning £81,000 for Unicef and Children in Crisis.

For those unfamiliar with the experience of fascinating, imagine walking along, balancing a small, yet elaborate piece of patisserie upon one’s head. They are at heart a delightful and ludicrous frippery, a way to seal an outfit with a flourish.

The problem is that, over the past 30 years, the essence of the fascinator has been diluted, so that it now appears as pointless and ubiquitous as the gastro pub drizzle or the barista fern.

Five years ago, Treacy himself declared the fascinator “dead”, thanks to the proliferation of glue-gunned high street headbands. “The word fascinator sounds like a dodgy sex toy,” he added.

Indeed, to gaze out over the congregation of many a modern wedding is the sartorial equivalent of the music hall turn. That joke isn’t funny any more.

So, let us applaud Lillian Smith and her bath puff for rekindling some of the verve and the wit of the fascinator – or, indeed, for drawing its wearisome reign to a close. Either way, Isabella Blow would surely be proud.