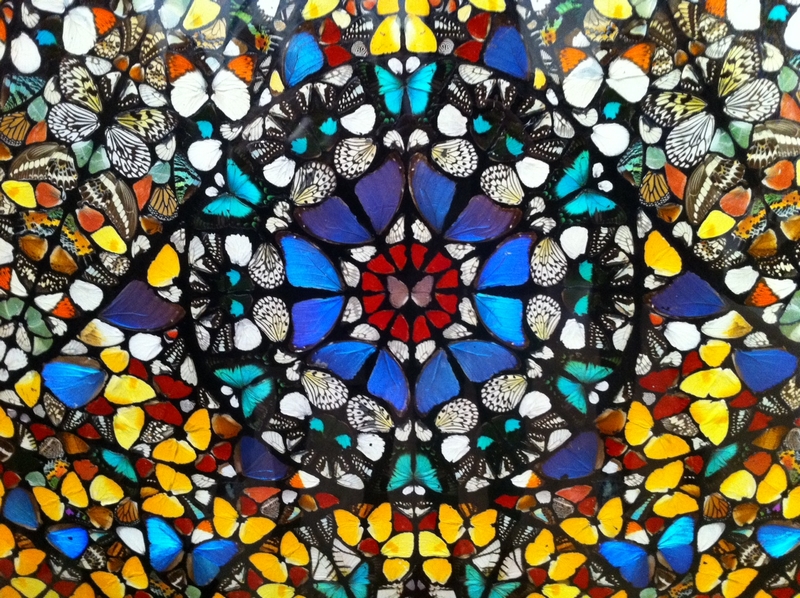 This article titled “Wings of desire: how butterflies have captivated artists” was written by Patrick Barkham, for The Guardian on Sunday 15th March 2015 18.00 UTC

Signifying sunshine, beauty and freedom, butterflies are ubiquitous in our culture, ever-present on greeting cards and used to sell everything from oven chips to SUVs. For artists, novelists and film-makers, however, butterflies and moths have often taken on darker meanings. In John Fowles’s The Collector, the protagonist (played by Terence Stamp in the film adaptation) is a butterfly obsessive who decides to collect young women. In The Silence of the Lambs, a sinister-looking moth (actually the death’s-head hawkmoth) is a serial killer’s signature. And in The Duke of Burgundy, a new film by Peter Strickland, the story of an S&M relationship is told through butterflies and moths. How have these insects come to symbolise sexual deviancy?

Artists have been seeing the human spirit in lepidoptera for centuries. The earliest-known depictions are of the eyed hawkmoth and the peacock butterfly in Pyrenees cave paintings. According to Peter Marren, author of new book Rainbow Dust: Three Centuries of Delight in British Butterflies, they appear on Minoan artefacts from Crete around 4,000 years ago, but it was the ancient Greeks who really shaped their use in culture, by explicitly linking them to the human soul. The Greek word for a butterfly and a soul is the same: psyche.

“It is striking how far this idea of the butterfly as a spirit goes back,” says Marren. “It’s probably preliterate. It seems to be endlessly repeated throughout civilisations.” As he writes, these free-flying insects are the closest thing the natural world offers to our concept of the untethered human spirit.

By the 18th century, Christian butterfly collectors saw a religious parable in the insect’s life cycle. We were caterpillars, greedy worms condemned to toil on earth; the chrysalis was our coffin, but the butterfly’s miraculous emergence symbolised the possibility of an afterlife, a chance for our souls to ascend to heaven. Back down on earth, collecting was regarded as the ideal occupation for a vicar: less bloodthirsty than foxhunting, but still getting the reverend out and about in the parish.

Butterflies have been considered to be human souls in many eras and cultures: in 17th-century Ireland, an edict forbade the killing of white butterflies because they were regarded as the souls of children. That may seem a little morbid, but it hardly paves the way for their sinister symbolism in today’s secular age. Marren’s research, however, reveals a long tradition of butterflies representing dark desires, fallen angels, temptation and death.

In Hieronymus Bosch’s best known work, The Garden of Earthly Delights, painted at the start of the 16th century, there are two little devils with the wings of the small tortoiseshell and the meadow brown. In 1562, Pieter Bruegel the Elder gave his ringleader the wings of a swallowtail in The Fall of the Rebel Angels. And Marren points out the long history of the red admiral butterfly as a symbol of “evil”: red represents danger in nature, and the superstitious saw its blood-red wings as a sign of foreboding when vast numbers of them appeared across Russia in 1881, when Tsar Alexander II was assassinated. Some believe that the date “1881” can be deciphered on the red admiral’s hind wings. Vladimir Nabokov, a brilliant lepidopterist as well as author, used the red admiral to sinister effect in his novel Pale Fire.

Throughout his career, Damien Hirst has used butterflies (including live ones hatching in a gallery) to make statements about the fleeting nature of life. But in the 20th century, it was writers in particular who took advantage of the fact that collectors were increasingly regarded as creeps. Shortly before John Fowles’s The Collector appeared, Enid Blyton deployed a couple of collectors in her 1957 Famous Five adventure, Five Go to Billycock Hill: her depiction of two myopic butterfly-lovers is slyly homophobic. Marren, a keen naturalist, understands such sinister representations of collectors, however: “It could be considered obsessive, narrow-minded behaviour, and it features death and clinical things such as gas [in jars to kill them], shiny pins and helpless fluttering insects – you could easily make a nightmare out of it. And there have hardly been any women collectors.”

It’s here that The Duke of Burgundy strikes an innovative note: the film is set in a fantastical world populated only by women, all of whom are rapt attendees of drolly dull entomology lectures. It tells the story of the shifting balance of power between an apparently dominant butterfly professor called Cynthia (played by Sidse Babett Knudsen, the Danish PM in Borgen) and her lover Evelyn, a quakingly subservient maid (Chiara D’Anna). In writer-director Strickland’s first draft, there was only a single shot of a butterfly painting, but after he decided to make his lovers entomologists, the theme grew. As well as taking its name from one of Britain’s rarest butterflies, the film is dominated by images of live moths and dead butterflies in cases.

Having an on-set entomologist helped deepen meanings in the film, and Strickland was particularly struck by the rich, strange language of lepidoptera. His lovers’ safe word is pinastri, the scientific name for the pine hawkmoth. “It sounded like ‘be nasty’. I love the idea of words having this incantatory quality – they become a kind of chant.”

Other species are used very precisely in the film. The moth that Evelyn holds at the end is an old lady; and, given the bondage theme, it seems appropriate the true lover’s knot moth should appear. Characters’ names are similarly chosen: Cynthia is the scientific name of the painted lady, while Dr Viridana is named after the green oak moth (Tortix viridana).

Ironically, despite all this, there isn’t actually a single live moth or butterfly in the film. Despite the typically eccentric “insects in order of appearance” at the end credits, they are all CGI. By the time Strickland was filming, in late autumn, all the big hawkmoths had vanished for the season.