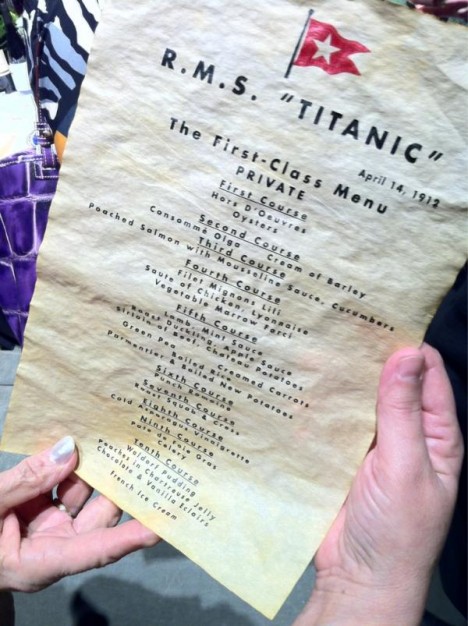 Titanic’s last lunch menu was the star lot in a Henry Aldridge and Son auction of Titanic memorabilia and was sold to a Britain-based collector for $122,000.

Before hitting an iceberg on April 14, 1912, Titanic offered to its wealthiest passengers “chicken a la Maryland” (fried chicken with creamy gravy), eggs Argenteuil (a plate of poached eggs with asparagus), galatine of chicken and grilled mutton chops, plus over 40 options in total over several courses.

The First Class menu, which had been on the table of American banker Washington Dodge, survived thanks to Dodge’s wife Ruth who had slipped the paper into her handbag after lunch, unaware that she would be carrying it onto a lifeboat that evening.

“The menu carries the all-important date of April 14 and gives the reader a fascinating insight into the culinary life of Titanic’s elite passengers,” said auctioneer Andrew Aldridge.

Henry Aldridge and Son are one of the South West’s premier auctioneers of antiques and collector’s items. They were described recently by the top collector of Ocean Liner Memorabilia world- wide as the “Leading source of high end ocean liner collectibles in the world” and are universally accepted as the premier auctioneers in the sale of Titanic and White Star Line Material.